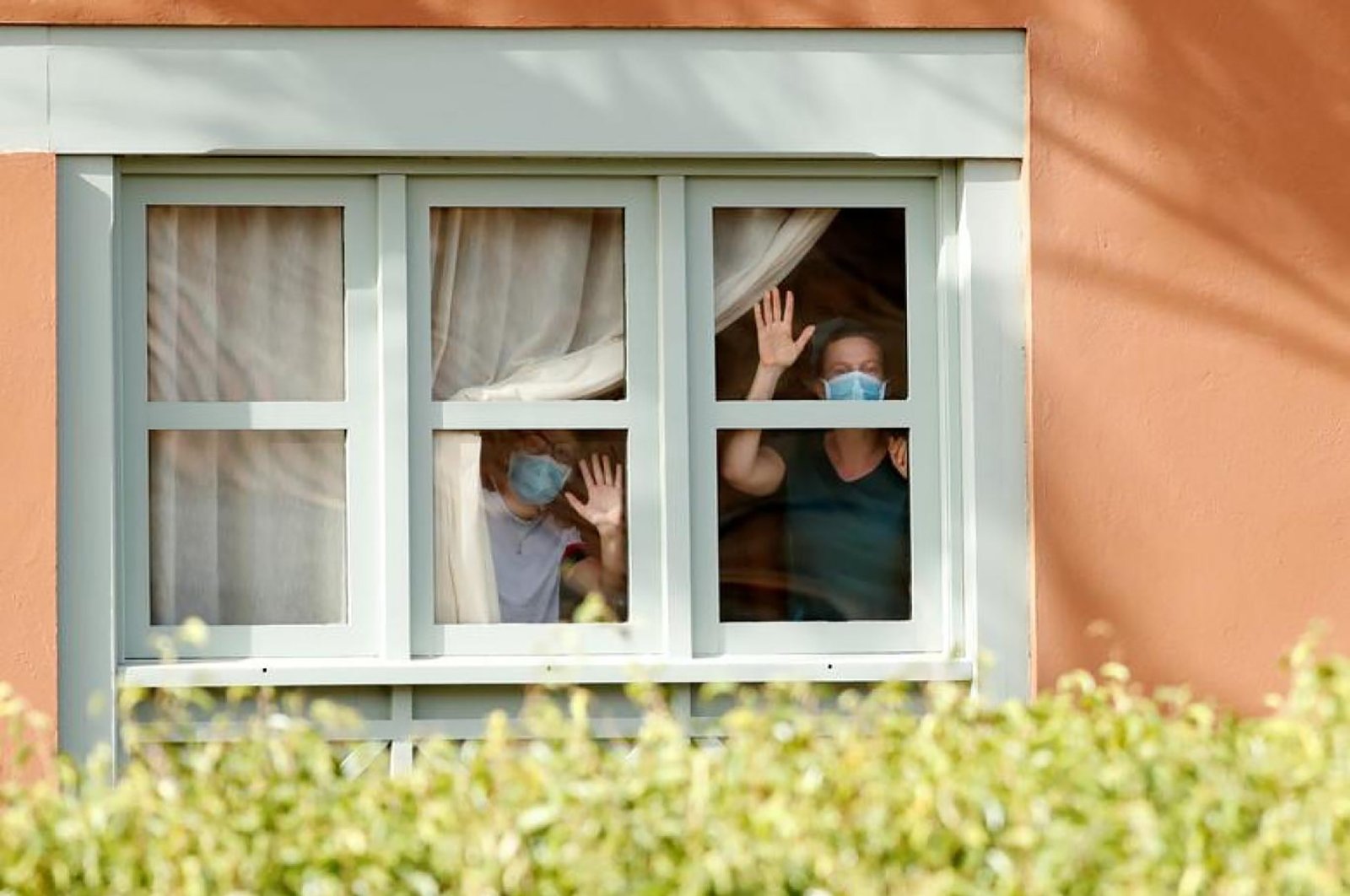 Guests, wearing protective face masks, look through a window at H10 Costa Adeje Palace, on the Spanish island of Tenerife on Wednesday, Feb. 26, 2020. (REUTERS Photo)
by Daily Sabah with Agencies Mar 30, 2020 11:51 am
RECOMMENDED

The novel coronavirus has thrust a host of unfamiliar terms into our everyday discourse, which can make things even more confusing amid a general uncertainty. Some are the terms used brand new and others aren't, but are being used in unexpected ways.

Let’s start with the basics.

COVID-19: It is the name of the illness caused by the new coronavirus first identified in China in late 2019. CO and VI are for coronavirus, D is for disease, and 19 for 2019. The virus itself is scientifically called SARS-CoV-2 (severe acute respiratory syndrome coronavirus).

On the topic of the virus...

R NAUGHT (R0): It is the infection rate of a disease, the expected number of people that each carrier will infect. In the case of coronavirus, this is thought to be between 1.5 and 3.5.

INCUBATION PERIOD: The time between when someone is infected with a pathogen, such as a virus, and when the first symptoms of an illness appear. The incubation period for the new virus is thought to be between 2-14 days on average.

ASYMPTOMATIC: When a patient is a carrier for a disease or infection but the virus causes no noticeable illness and no apparent symptoms. Given the rapidity of the spread, doctors say asymptomatic people can have high levels of the virus in their respiratory secretions and therefore spread the virus unknowingly.

Now let’s talk about outbreak vs. epidemic vs. pandemic.

OUTBREAK: An increase, often sudden, in the number of cases of a disease above what is normally expected among the population in a limited area.

EPIDEMIC: A large outbreak, one that spreads among a population or region.

PANDEMIC: Generally refers to an epidemic that has spread on a more global scale, affecting large numbers of people. Exactly when enough places have enough infections to declare one isn’t a black-and-white decision. But generally, the WHO looks for sustained outbreaks on different continents.

Are we currently in quarantine or isolation?

QUARANTINE: When someone who has been exposed to a disease but is not visibly sick stays away from others for a period of time in case they are infected. By keeping their distance, they can avoid spreading the disease to others. A quarantine usually lasts a little longer than the incubation period for the disease, just to be safe.
For example, the passengers on the Diamond Princess cruise ship in Japan were quarantined.
A quarantine can be ordered by authorities.

ISOLATION: When someone who is definitely sick stays away from others so that they don't infect anyone else. In the case of this coronavirus, isolation should continue until the risk of infecting someone else is thought to be low. The decision to end isolation should be made on a case-by-case basis, in consultation with health care providers and the local health department.
Isolation can be ordered by public authorities as well.

So what the general public is doing at the moment is not either of these, it is...

SOCIAL DISTANCING: To keep away from crowded places where a virus could more easily spread. In the case of COVID-19, health officials are encouraging members of the public to work from home, cancel mass events and maintain about six feet of space between themselves and others. A radical measure is to close most businesses and order the public to shelter at home except for essential activities, such as purchasing food and caring for relatives, while allowing people to go outside for a walk.

If successful, social distancing measures will help slow the pace of new infections and "flatten the curve."

Slowing the spread of the virus can help prevent the hospital system from being overwhelmed by too many patients. If that were to happen, critical care units could run out of the ventilators that are needed to help people breathe if their lungs fail.

During the 1918 Spanish flu pandemic, officials in Philadelphia failed to cancel a citywide parade and acted far more slowly to ban public gatherings than their counterparts in St. Louis. As a result, the peak death rate in Philadelphia was much worse than in St. Louis, according to a study in the Proceedings of the National Academy of Sciences published in 2007.

CLOSE CONTACT: In the case of COVID-19, it's anyone who is within 1.8 meters of a person infected with SARS-CoV-2 for a prolonged period of time.
This includes people who live with, care for or visit an infected person. It can also describe people who merely share a waiting room with an infected patient or who have direct contact with a patient's infectious secretions (such as by being coughed on).

What about the legal side of things and lockdowns?

PUBLIC HEALTH ORDERS: These are legally enforceable directives that may place restrictions on the activities of individuals or groups in the name of protecting the public's health. Officials may issue public health orders, such as restricting people's movements or requiring that their movements be monitored by health authorities.

LOCKDOWN: This is a government-imposed emergency protocol/order to close down public places and enforce people to stay in their homes usually via police forces.

But what are the people who still have to go to work supposed to do? There are jobs that need to be done to maintain order and continuation of services and they are classified as essential workers.

ESSENTIAL WORKER: Basically, it is the people whose jobs require them to continue working and are therefore exempt from a lockdown. Anyone that works in healthcare and public health, social care, financial services, transport, communications, including the media, as well as delivery personnel, public and civil service personnel, as well as some janitorial/cleaning personnel, are considered key workers.

What about our (current and past) strategies to combat the disease and its spread?

CONTAINMENT: A public health strategy in which officials aim to prevent the spread of an infectious disease beyond a small group of people to the broader community.
Containment actions include restricting travel from affected regions, identifying infected people and tracking down everyone they live with or have spent time with (contact tracing), and asking those who have been exposed to the virus to stay at home for a period of time. Although it did not work for COVID-19, containment has been used to keep a measles outbreak from spreading out of control within communities with low immunization, for instance.

MITIGATION: The public health goal once a virus has spread so widely that it's impossible to keep it away – this is what Italy, Turkey, and many others are doing. Instead of mainly relying on public health authorities to do things like locate sick people and identify their contacts, health officials ask the public to help slow the spread of the virus. Useful actions can include reminding people to stay home when they're sick and disinfecting commonly touched surfaces in buildings daily.