COVID-19: Could accelerating testing for a vaccine just make everything worse? 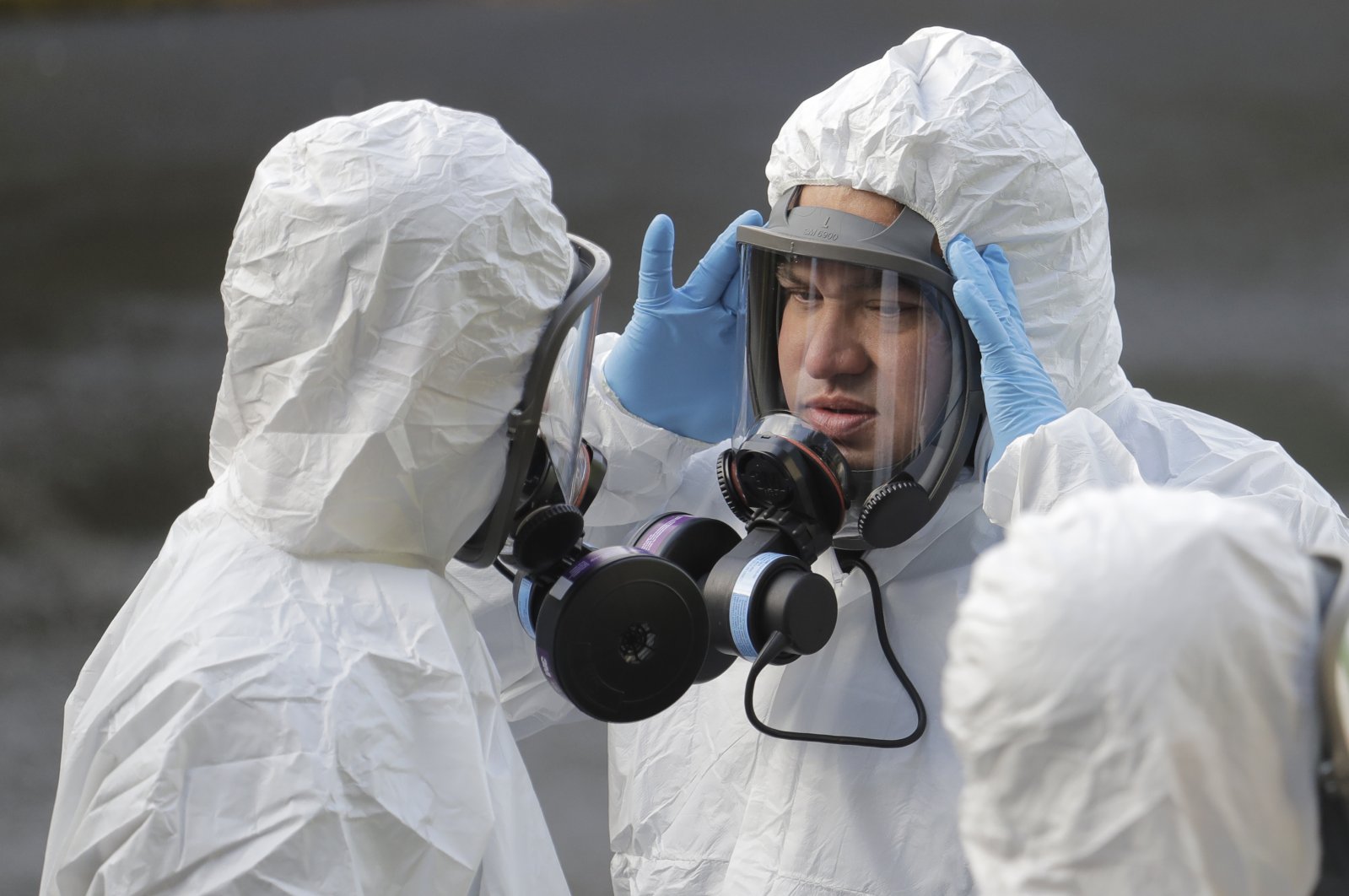 A worker from a Servpro disaster recovery team wearing a protective suit and respirator adjusts his mask before entering the Life Care Center in Kirkland, Wash. to begin cleaning and disinfecting the facility, Wednesday, March 11, 2020, near Seattle. The nursing home is at the center of the outbreak of the COVID-19 coronavirus in Washington state. (AP Photo)
by REUTERS Mar 11, 2020 11:16 pm
RECOMMENDED

Drugmakers are working as quickly as possible to develop a vaccine to combat the rapidly spreading coronavirus that has infected more than 100,000 people worldwide.

Behind the scenes, scientists and medical experts are concerned that rushing a vaccine could end up worsening the infection in some patients rather than preventing it.

Studies have suggested that coronavirus vaccines carry the risk of what is known as vaccine enhancement, where instead of protecting against infection, the vaccine can actually make the disease worse when a vaccinated person is infected with the virus. The mechanism that causes that risk is not fully understood and is one of the stumbling blocks that has prevented the successful development of a coronavirus vaccine.

Normally, researchers would take months to test for the possibility of vaccine enhancement in animals. Given the urgency to stem the spread of the new coronavirus, some drugmakers are moving straight into small-scale human tests, without waiting for the completion of such animal tests.

“I understand the importance of accelerating timelines for vaccines in general, but from everything I know, this is not the vaccine to be doing it with,” Dr. Peter Hotez, dean of the National School of Tropical Medicine at Baylor College of Medicine, told Reuters.

Hotez worked on the development of a vaccine for SARS (Severe Acute Respiratory Syndrome), the coronavirus behind a major 2003 outbreak, and found that some vaccinated animals developed more severe disease compared with unvaccinated animals when they were exposed to the virus.

“There is a risk of immune enhancement,” said Hotez. “The way you reduce that risk is first you show it does not occur in laboratory animals.”

Hotez testified last week before the U.S. House Committee on Science, Space and Technology about the need for sustained funding for vaccine research. There remains no vaccine for any of the new coronaviruses that have caused outbreaks in the past 20 years.

At least for now, the world’s experts have concluded that accelerated testing is a risk worth taking.

At a specially convened World Health Organization (WHO) meeting in mid-February, designed to coordinate a global response to the new coronavirus, scientists representing government-funded research organizations and drugmakers around the world agreed that the threat was so great that vaccine developers should move quickly into human trials before animal testing is completed, four people who attended the meeting told Reuters.

“You want to have a vaccine as quickly as possible,” Dr. Marie-Paule Kieny, former assistant director-general at the WHO, who co-chaired the meeting, told Reuters. “You have to balance this with the risk that you impose on a very small number of people, and do all you can do to mitigate this risk as much as possible.”

The conclusion of that meeting, which was not open to media, has not been officially publicized by the WHO. It does not reflect any official position adopted by the WHO, a U.N. body whose job it is to help shape global health policy.

Regulatory oversight of drugmakers and medical research is in the hands of national regulators. The most powerful of those, the U.S. Food and Drug Administration (FDA), has signaled that it is in agreement with the consensus and will not stand in the way of accelerated testing schedules.

“When responding to an urgent public health situation such as novel coronavirus, we intend to exercise regulatory flexibility and consider all data relevant to a certain vaccine platform,” FDA spokeswoman Stephanie Caccomo said in a statement. The agency had no comment specifically on animal testing for vaccine enhancement.

Coronavirus vaccine developers are still required to conduct routine animal testing to make sure the vaccine itself is not toxic and is likely to help the immune system respond to the virus.

Some 20 coronavirus vaccine candidates are being developed by research institutes and drugmakers including America’s Johnson & Johnson and France’s Sanofi SA. The U.S. government has earmarked more than $3 billion for coronavirus treatments and vaccines.

Biotechnology company Moderna Inc, which is working with the U.S.-funded National Institutes of Health (NIH), is the closest to human testing, announcing plans to start a trial with 45 people in Seattle this month.

Testing for the specific risk of vaccine enhancement in animals will proceed simultaneously with human trials, the NIH told Reuters, which it said should establish whether it is safe to expose larger numbers of people to the vaccine. Moderna did not respond to requests for comment.

Dr. Gregory Poland, a virologist and vaccine researcher with the Mayo Clinic in Rochester, Minnesota, expressed doubts about that approach. “This is important, but it has to be done in a way that reassures scientists and the public that these (vaccines) are not only efficacious but safe,” he told Reuters.

Hotez said he was surprised human trials were going ahead. “If there is immune enhancement in laboratory animals vaccinated with the Moderna vaccine, that’s a showstopper,” he said.

U.S. immunotherapy company, Inovio Pharmaceuticals Inc., which is developing a coronavirus vaccine in collaboration with a Chinese company, also expects to start human clinical trials in 30 U.S. volunteers in April rather than wait for animal studies on vaccine enhancement.

“The community as a whole weighed that and said we don’t want to delay the clinical process. We’ve been encouraged to go as rapidly as possible into Phase 1 studies,” Inovio Chief Executive Joseph Kim told Reuters.

The company plans to start human safety trials shortly thereafter in China and South Korea – two countries that have been hit hard by the virus. Kim said he expects to have an answer to the question of vaccine enhancement at some point this year.

The Moderna/NIH trial is enrolling patients at the Kaiser Permanente Washington Health Research Institute in Seattle. The choice of location, made several weeks ago, could prove to be problematic.

To reduce the risk to volunteers, scientists at the WHO meeting recommended that drugmakers restrict early clinical trials to small groups of healthy people and conduct them in places where the virus is not spreading, according to Kieny, who now works at French research institute Inserm. That lowers the chances that people who get the vaccine could encounter the virus and trigger a more severe reaction.

Since the location was chosen, the Seattle metro area has emerged as the epicenter of infections in the U.S. Washington state has reported 162 coronavirus infections and 22 deaths, out of a total of 755 infections and 26 deaths in the country as of Tuesday, according to a tally by Johns Hopkins University.

Nevertheless, Moderna and the NIH plan to go ahead.

“We think there is no reason to have to change the site. If you change it, there might be community transmission in another site over the next couple of weeks,” Erbelding said. “Any risk of that to participants is very small. It would be manageable as the trial progresses. People are being observed very, very carefully.”

Tragic lessons from other vaccines and prior work on coronaviruses have raised some warning flags for developers.

The best-known example occurred in a U.S. trial in the 1960s of a vaccine created by the NIH and licensed to Pfizer Inc to fight the respiratory syncytial virus (RSV), which causes pneumonia in infants. The vast majority of babies who received the vaccine developed the more severe disease, and two toddlers died. A more recent example occurred in the Philippines, where some 800,000 children were vaccinated with Sanofi’s dengue vaccine, Dengvaxia. Only afterward did the company learn that it could increase the risk of more severe disease in a small percentage of individuals.

Research, including that conducted by Hotez, has shown that coronaviruses, in particular, have the potential to produce this kind of response. But testing for the risk of vaccine enhancement is time-consuming because it requires scientists to breed mice that are genetically altered to respond to the virus-like humans. Work on these and other animal models is just getting underway in several laboratories around the world.

Moderna, Inovio and several other vaccine developers are not waiting for that process to be completed and are planning to launch human trials in record time for a virus that was only discovered in December.

Both Moderna and Inovio say their vaccines are likely to have a lower risk of vaccine enhancement because they are made using newer technology that focuses on specific genes on the outer ‘spike’ portion of the virus. Coronavirus vaccines that caused vaccine enhancement were typically made using an inactivated version of the entire virus. Neither company has produced a licensed vaccine to date.

J&J said it is developing animal models to test for vaccine enhancement and hopes to have a vaccine candidate ready for human trials in October. A Sanofi spokeswoman said the company will examine this risk before testing the vaccine in clinical trials.

“People know how traumatic the RSV experience was,” said Dr. Johan Van Hoof, global head of Janssen Vaccines, J&J’s vaccine unit. “When you see signals in animals like this, we should not ignore them.”