COVID-19, face masks and rule-breaking: To comply or not to comply? That's the question 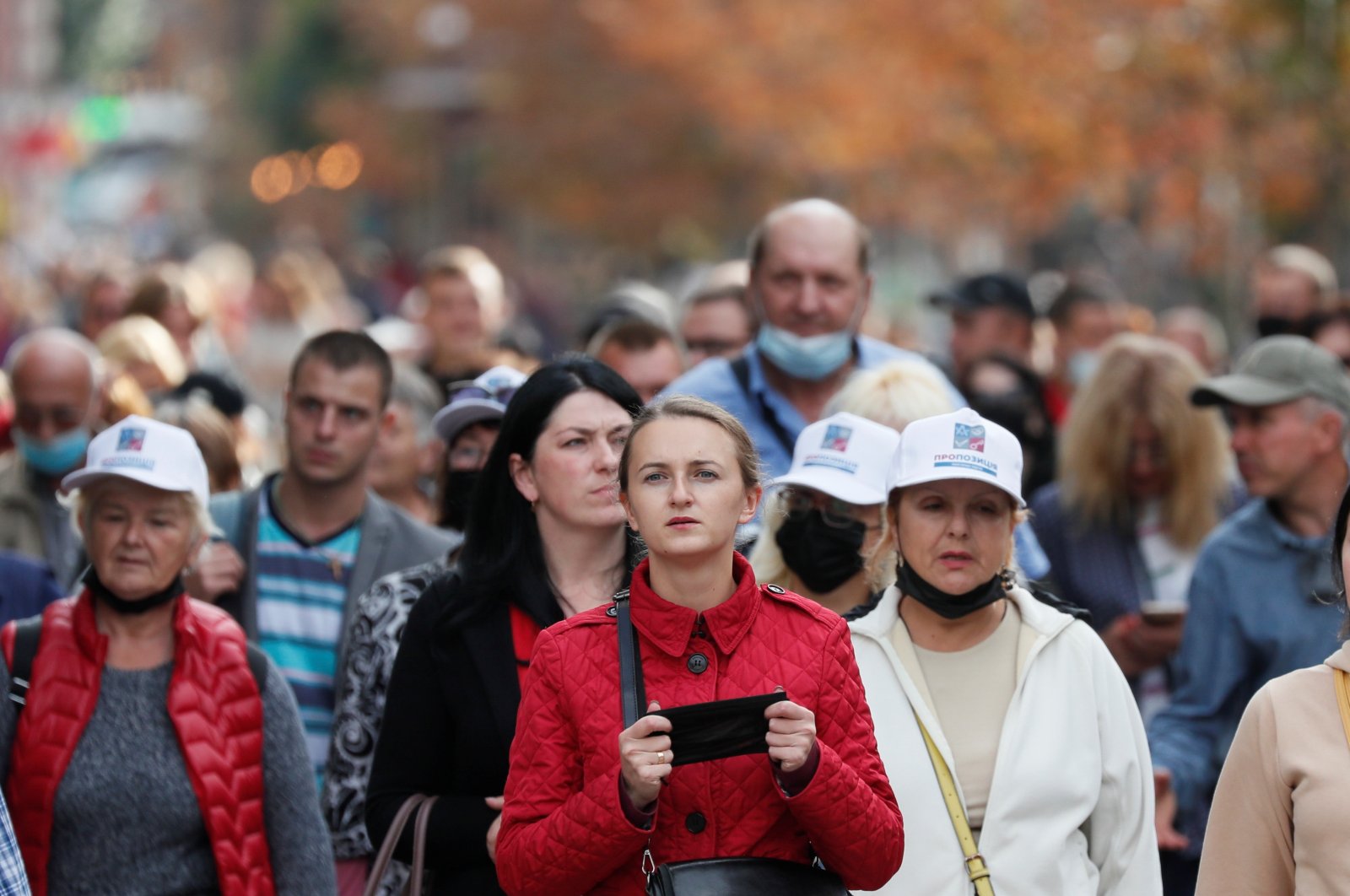 Despite a raging pandemic, rising cases and repeated warnings, some are choosing not to wear masks or comply with the rules. This is true for every country on Earth, but why do some people not play by the rules?

When you look at the global response to the COVID-19 pandemic, it is easy to see that it differs greatly when it comes to individual countries. On one side in the far west we have the United States, a tough denier of the public threat in the early days of the pandemic and now left to deal with the fallout of the first wave. Across the pond we have China, with Wuhan as its epicenter of the coronavirus outbreak, employing every possible tracking and tracing method since day one to control its spread.

In between both countries, we have Turkey and Europe as a whole, but even in a seemingly smaller region, there have been wildly different practices surrounding these countries’ responses to the pandemic. In the early days of the pandemic, Turkey, too, had encouraged only citizens exhibiting obvious symptoms to wear face masks, as per the guidance of the World Health Organization (WHO). However, scientists soon found that particles of the coronavirus could remain in the air for up to eight hours or more and that as much as 20% of cases were asymptomatic, meaning the disease was silently being transmitted by superspreaders. Social distancing measures followed as well as nationwide lockdowns and obligatory face-mask wearing in enclosed spaces such as public transportation or offices.

Despite the mounting evidence, however, some countries still insisted on going face mask-free, such as the Netherlands and the U.K. Only months later, after thousands of deaths and increasingly overwhelmed hospital staff's cries did such governments take more stringent measures.

One interesting point of similarity between countries where the response to the pandemic was much more relaxed is that they share kindred beliefs and cultures. The same could be said for countries with more decisive approaches. But why do some countries, and some people, stick to the rules and others don't?

One reason for this is culture, and this is where we see the great West-East divide. According to professor of psychology Arzu Karakulak, societal culture is the biggest determinant of people's behavior in such crises. Asian countries, spearheaded by China, Japan and Korea, without a doubt, have the West beat when it comes to wearing a mask.

Though health experts attribute this to widespread mask-wearing to combat air pollution as well as the severe acute respiratory syndrome (SARS) epidemic of 2002-2004, Karakulak believes the cultural structures of these countries are a big driving force behind this behavior.

Karakulak says Asian countries' previous experience with SARS may have prompted people to take this virus more seriously and be consistent in the application of government-introduced measures across the whole community but that it boils done to cultural norms and behavior.

“In collectivist cultures that have a sense of community, individuals care more about the well-being of others and maintaining order and peace within the group. It is more common to see in these cultures that people adapt to society, abide by community norms and rules, and condemn those who do not," she says.

However, this does not necessarily mean these cultures will follow the rules to a T. In fact, individualistic cultures may be more advantageous when it comes to abiding by the rules.

As the behavior of following measures taken to combat the coronavirus pandemic targets the health of the whole society, the results are not directly visible and only to be seen long-term, it becomes a matter of social responsibility. At this point, individualistic cultures can be more advantageous. Those with an acute sense of social responsibility will be supporting a mask, no matter others' behavior in any given group.

The effectiveness of a culture that favors a sense of community in adopting mask-wearing practices and internalizing this behavior, however, is also undeniable.

"Some countries ... tend to be higher on individualism, which is about expressing your sense of identity and who you are as an individual," Jay Van Bavel, an associate professor of psychology at New York University, told Reuters. An individual brought up in individualist cultures will be more likely to disregard public authorities' attempts to elicit change via risk warnings or appeals for altruism, rejecting rules.

"If you say, for example, that wearing a mask will help protect others, people in individualistic cultures just care less," said Michael Sanders, an expert at the Policy Institute at King's College London, as carried by Reuters.

Meanwhile, in collectivist cultures, people are more likely to do what's best for the group or act out of fear of "what would others say."

"When compared to western countries, most Asian countries accept more hierarchical structures (in society) and obey the rules more; they are less individualistic and look at things from a long-term perspective. Asian countries are more inclined to obey the rules, maintaining social peace and harmony, and sacrificing short-term individual gains for long-term social gains," Karakulak says.

Similarly, a large-scale study published in the past weeks analyzed data from 67 countries and found that cultures that adopted a nationalistic identity were more likely to comply with measures.

"In this sense, Turkey would be more likely to comply than many Western countries, " she added.

Another factor that increases compliance with rules is the motivation to protect oneself.

Karakulak says those who do not see the coronavirus as a valid and dangerous threat, and instead see themselves as powerful and superior, will have low motivation to take precautionary measures. Hence, they will be less likely to take action or wear a mask. This could also stem from the "I am invincible" mentality such people have.

This supports previous research in Brazil and Poland that found that people who had sociopathic tendencies or with psychopathic or narcissistic traits were more likely to refuse to wear a face mask, disobey rules and hoard items like toilet paper.

But there is also a social dimension to the coronavirus pandemic. Those who do not see the virus as a personal threat but have accepted wearing a mask to protect the lives of others will actually comply with such measures and sport a mask, Karakulak says.

"Therefore, making calls targeting social responsibility is especially important in order to increase the compliance of individuals who do not see the virus as a threat."

How to get more people to comply

Punishment is never as effective as rewards or positive reinforcement. Stating that punishments will only change behavior in the short-term, Karakulak says as soon as these punishments are lifted or people feel as if they are no longer at risk, rule-breaking behaviors will be amplified.

"We saw such behavior when lockdowns were lifted in Turkey and people flooded the streets like never before," she said.

This behavior can be explained simply by the concept of reasoning.

"People always look for excuses and reasons for their behavior. For example, they will ask themselves why they are wearing this mask. If you impose heavy penalties for not wearing one, people will explain the reasoning for their behavior as 'to avoid punishment.'"

The problem with this approach is that people lose sight of the real reason and what's really important. If individual behavior is dependent on avoiding heavy punishment, that behavior will not be embraced by the said individual.

Karakulak says for people to internalize mask-wearing, punishments should be deterrent enough but not too severe. And in the long-term, punishment always reduces motivation to comply with the rules, she added.

When personal comfort should take a backseat

In a world built on living in the moment, prioritizing personal gains and comfort over everything, it is only natural for people to reject things that cause even the slightest inconvenience.

Karakulak says people are likely to succumb to their immediate and selfish impulses by ignoring the long-term social consequences of their actions and therefore may not wear a mask because it is "difficult." However, Karakulak warns that such negative behavior can quickly turn into a snowball effect.

Even if a certain individual was initially following the rules, after seeing people not wearing masks and breaking the rules, they, too, will give up on being collaborative and act contrary to the common good.

"'Why bother wearing a mask when others aren't?' will be the thought circulating in their heads. In psychology, we call this the 'tragedy of the commons,'" said Karakulak.

But one can't help ask: if only a few people are not wearing a mask and they are the minority, does it really matter?

"The problem is that, in a massive collective problem like the one we're facing now, if everybody breaks the rules a little bit, then it's not dissimilar to lots of people not following the rules at all," said Sanders.