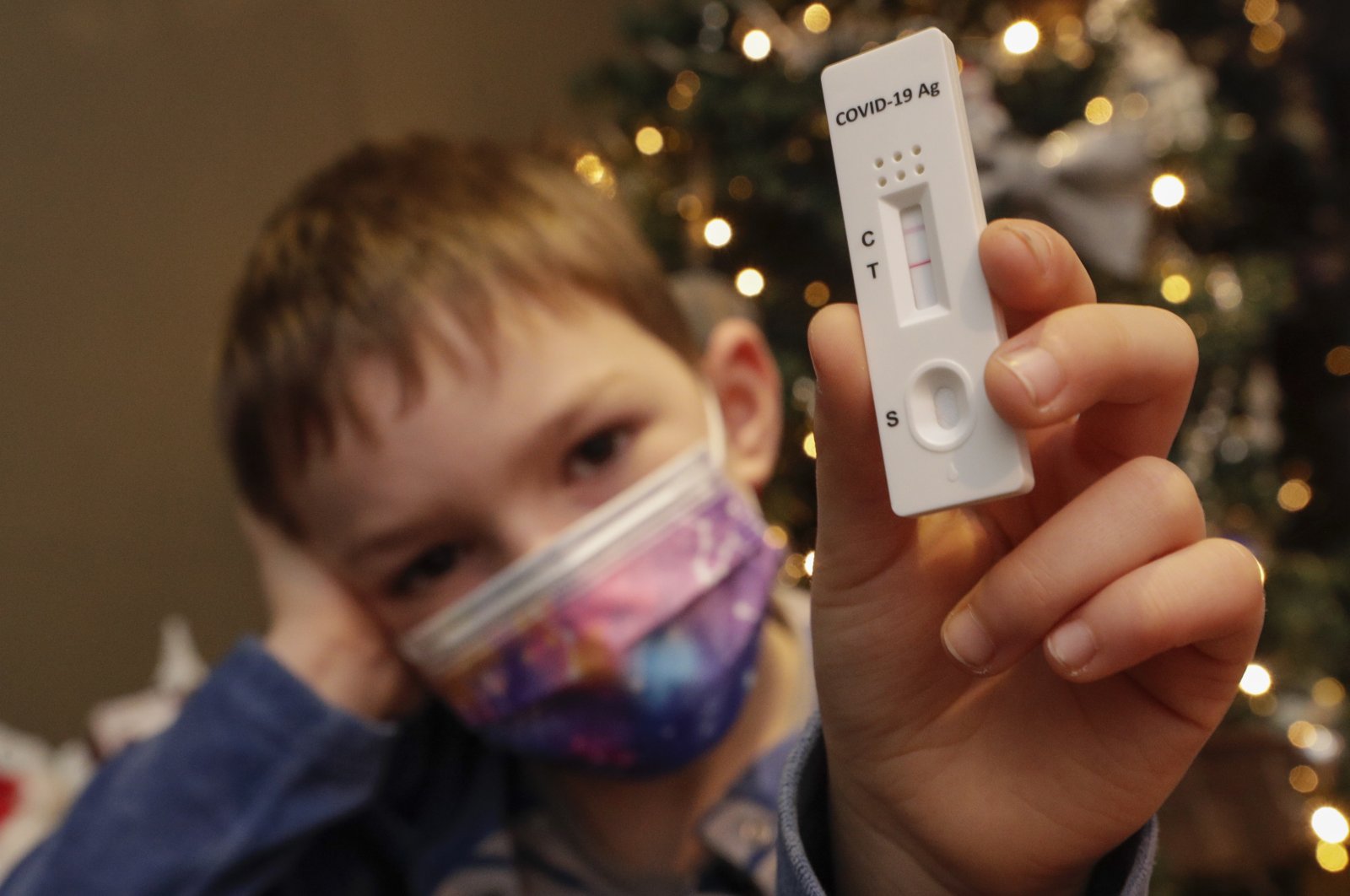 In this week's roundup, the latest scientific research on the coronavirus and efforts to find treatments and vaccines suggest that antibody drug bamlanivimab for COVID-19 pneumonia may differ depending on whether the patient's immune system is already producing its own antibodies and that common health issues increase the risk for severe COVID-19.

Omicron infections no less severe based on early UK data

Infections caused by the omicron variant of the coronavirus do not appear to be less severe than infections from delta, according to early data from the U.K.

Researchers at Imperial College London compared 11,329 people with confirmed or likely omicron infections with nearly 200,000 people infected with other variants. So far, according to a report issued ahead of peer review and updated on Monday, they see "no evidence of Omicron having lower severity than Delta, judged by either the proportion of people testing positive who report symptoms, or by the proportion of cases seeking hospital care after infection."

For vaccines available in the U.K., effectiveness against symptomatic omicron infection ranged from 0% to 20% after two doses, and from 55% to 80% following a booster dose. The report also estimated that after taking individual risk factors into account, the odds of reinfection with omicron are 5.4 times greater than for reinfection with delta. A study of healthcare workers in the pre-omicron era estimated that a prior SARS-CoV-2 infection afforded 85% protection against a second infection over 6 months, the researchers said, while "the protection against reinfection by Omicron afforded by past infection may be as low as 19%."

Sperm count, motility may be low for months after COVID-19

Sperm quality is impaired for months for some people after recovery from COVID-19, researchers have found.

The semen itself was not infectious, the researchers found. But among 35 men who provided samples within a month after recovery from symptomatic infection, reductions in sperm motility were evident in 60% and sperm counts were reduced in 37%. As reported on Monday in Fertility and Sterility, semen samples were obtained from 120 Belgian men with an average age of 35 years, at an average of 52 days after their COVID-19 symptoms had resolved. Among 51 men tested between one and two months after recovery, 37% had reduced sperm motility and 29% had low sperm counts. Among 34 men who provided semen samples at least two months after recovery, sperm motility was impaired in 28% and sperm counts were low in 6%. The severity of COVID-19 infection was not correlated with sperm characteristics.

"Couples with a desire for pregnancy should be warned that sperm quality after COVID-19 infection can be suboptimal," the researchers concluded. "The estimated recovery time is 3 months, but further follow-up studies are under way to confirm this and to determine if permanent damage occurred in a minority of men."

Neutralizing molecule could be cheaper than antibodies

An experimental molecule that neutralizes the coronavirus in the same way antibodies do would be cheaper and easier to manufacture, researchers said.

The molecule belongs to a class of compounds known as aptamers. Because they are made from RNA or DNA, aptamers are easier to synthesize than protein-based antibodies that can only be produced in living cells, said Julian Valero of Aarhus University in Denmark. Like antibodies, the aptamers attach themselves to protein targets – in this case, the spike protein on the virus surface – by folding into a three-dimensional conformation. A study published in PNAS shows that in test tube experiments, the aptamer binds tightly to the coronavirus spike, preventing it from breaking into human cells. It inhibits earlier variants of the virus, including delta, the researchers said. They are planning tests to see whether it also recognizes and binds to omicron.

Use of the aptamer in patients is still far off, with tests in mice only recently begun. In terms of use in humans, "we're much closer" to being able to use the aptamer to help diagnose SARS-CoV-2 infections, said Jorgen Kjemsa, also of Aarhus University. Experiments comparing the use of the aptamer to antibodies in widely used rapid COVID-19 tests for infection are underway, he said.

Common conditions that put people at risk for serious illnesses like diabetes, heart attack and stroke also put them at risk for critical illness and death from COVID-19, researchers have found.

"If you have high cholesterol, high blood pressure, mild obesity and pre-diabetes or diabetes and are hospitalized with COVID-19, you have a one-in-four chance of developing ARDS, which is significant," study leader Dr. Joshua Denson of Tulane University School of Medicine said in a statement. Metabolic syndrome was significantly more common among patients in U.S. hospitals (18.8%) than in other countries (8%), leading the researchers to suggest that one reason the United States leads the world in COVID-19 deaths could be its high rates of metabolic syndrome, obesity and diabetes.

Sudden food aversion in toddlers can be clue to COVID-19

In toddlers, one clue to a diagnosis of COVID-19 may be a sudden complete or nearly complete avoidance of solid foods due to alterations in the child's sense of smell and taste, doctors in California suggest.

In a report published on Tuesday in Pediatrics, they describe two small children, both younger than 18 months, who suddenly developed an aversion to solid food around the time they were diagnosed with COVID-19. When they did eat, they gagged or spit up the food immediately afterward. One toddler also became acutely sensitive to the smell of any fragrant products at the same time as the food aversion, another sign of an impaired sense of smell. Six to eight months after diagnosis, both toddlers had started to tolerate some solid food, but neither had fully resumed their baseline intake.

"This delayed and variable clinical course in our patients is consistent with recent studies in adults" showing that COVID-19-related problems with smell and taste "can wax and wane, and one-third of patients may have persistent symptoms," the doctors said. They said they hope to see more data from other pediatricians to add to their findings. But based on their limited data, they said food aversion in young, preverbal children "should be a trigger to test for the presence of SARS-CoV-2 infection."

The efficacy and safety of Eli Lilly and Co.'s monoclonal antibody drug bamlanivimab for COVID-19 pneumonia may differ depending on whether the patient's immune system is already producing its own antibodies, a new analysis suggests.

Researchers reanalyzed data from a randomized trial in which 163 hospitalized COVID-19 patients had received bamlanivimab. Roughly half of those patients did not have their own antibodies against the virus at the start of the study, and these patients appear to have been more likely to have recovered faster. In patients who did already have their own antibodies, however, bamlanivimab was linked to higher risks for death, organ failure, or serious adverse events compared to a placebo, the researchers reported on Monday in Annals of Internal Medicine.

Reanalyses of trial data are less reliable than if the trial had been designed to answer the question in the first place. Still, this analysis provides "two main messages," said Dr. Jens Lundgren of the University of Copenhagen. Monoclonal antibodies may be helpful in hospitalized COVID-19 patients without their own antibodies, but they "may be harmful" when the patient's immune system is responding, Lundgren said. The U.S. Food and Drug Administration has granted emergency use authorization to several monoclonal antibodies that neutralize SARS-CoV-2, including bamlanivimab, which is given together with Lilly's etesevimab.