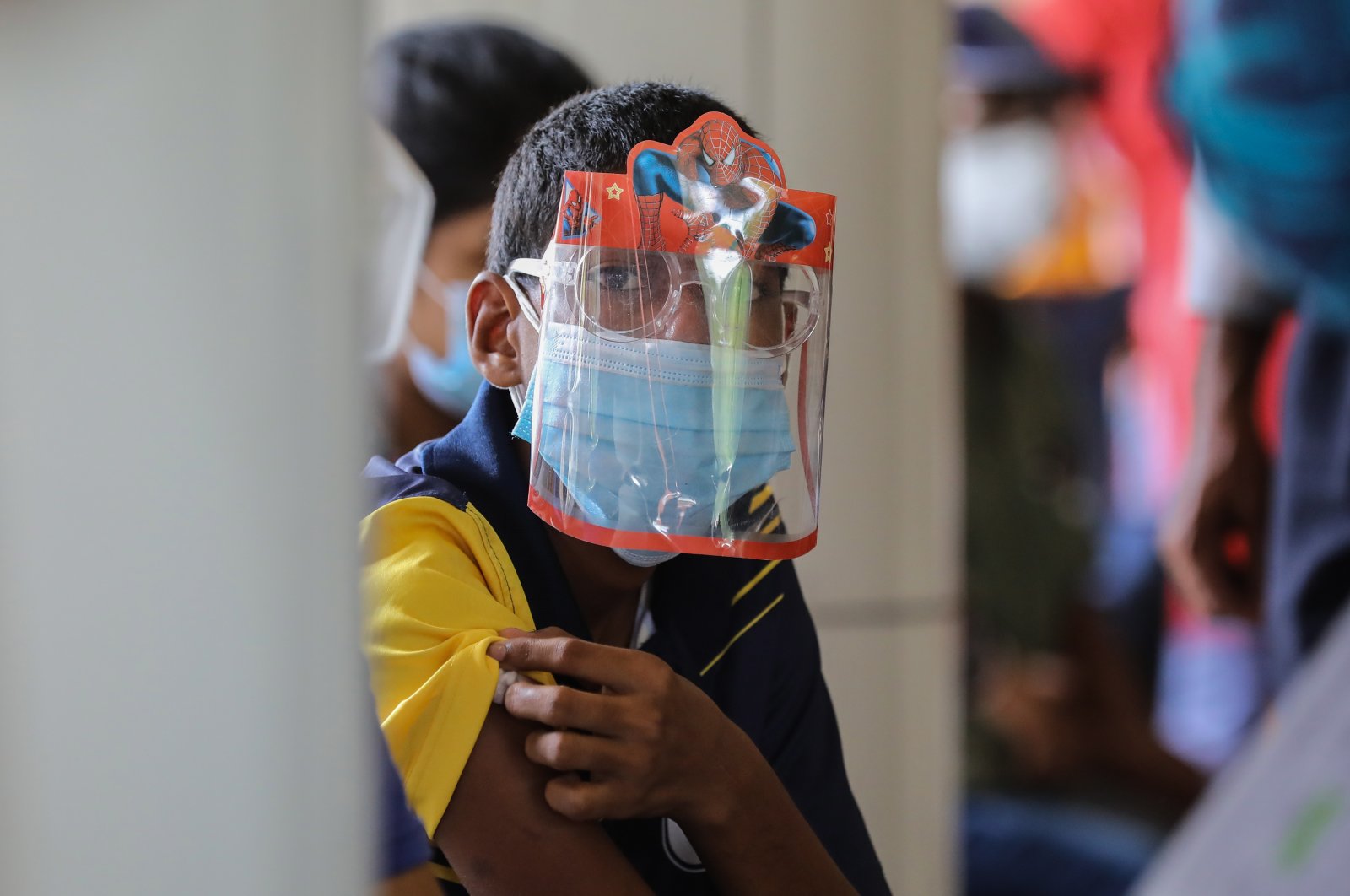 A Sri Lankan boy with a face shield with his hero receives his COVID-19 vaccine at a Hospital during an island-wide lockdown as a preventive measure against the spread of COVID-19, Colombo, Sri Lanka, Sept. 30, 2021. (EPA Photo)
by REUTERS
Oct 03, 2021 11:29 am

In this week's roundup, the latest scientific research on the coronavirus and efforts to find treatments and vaccines suggest that antiviral drug remdesivir helped keep high-risk COVID-19 patients out of hospital and that when the coronavirus infects cells, it not only impairs their activity but can also change their function.

A protein called CD47 that helps damaged cells avoid destruction by the immune system may be contributing to severe cases of COVID-19, researchers believe. Drugs in development targeting CD47 may result in improved COVID-19 therapies, they suggested in a report published in Current Issues in Molecular Biology. "We may have identified a major factor associated with severe COVID-19," co-author Martin Michaelis of the University of Kent said in a statement. "We can now look forward to further progress in the design of therapeutics." In lab experiments, the researchers found that CD47 – which in effect tells the immune system, "Do not eat me!" – is present in increased amounts on the surfaces of cells infected with the coronavirus. SARS-CoV-2 infection also increases levels of another protein, SIRPalpha, that partners with CD47 to trick the immune system into ignoring the sick cells. Previous studies have shown that CD47 levels are also elevated in conditions that put people at higher risk for critical illness from COVID-19, such as old age, diabetes, high blood pressure and clogged blood vessels. In these groups, "high CD47 levels may predispose ... to severe COVID-19," the researchers said. "Further research will be needed to define the roles of CD47 and/or SIRPalpha in COVID-19 in more detail," they added.

Remdesivir keeps high-risk patients out of the hospital

Gilead Sciences Inc's intravenous antiviral drug remdesivir helped keep high-risk COVID-19 patients out of hospital in a randomized trial, the company announced. The 562 patients in the study all had conditions that increased their risk for becoming critically ill. Half received three days of treatment with remdesivir – sold under the brand name Veklury – while the rest received a placebo. Four weeks later, 5.3% of patients in the placebo group had been hospitalized or died, compared to 0.7% of those who received remdesivir. That translated into an 87% lower risk of hospitalization or death. Remdesivir-treated patients also had significantly fewer medical visits, the company said. The drug is currently authorized for emergency use in hospitalized patients. "These latest data show remdesivir's potential to help high-risk patients recover before they get sicker and stay out of the hospital altogether," study leader Dr. Robert Gottlieb of Baylor University Medical Center said in a statement. His team plans to formally report the data at an upcoming medical conference.

Pandemic cuts life expectancy by most since WWII

When the coronavirus infects cells, it not only impairs their activity but can also change their function, new findings suggest. For example, when insulin-producing beta cells in the pancreas become infected with the virus, they not only produce much less insulin than usual but also start to produce glucose and digestive enzymes, which is not their job, researchers found. "We call this a change of cell fate," said study leader Dr. Shuibing Chen, who described the work in a presentation Tuesday at the annual meeting of the European Association for the Study of Diabetes, held virtually this year. It is not clear whether the changes are long-lasting, or if they might be reversible, the researchers noted earlier in a report published in Cell Metabolism. Chen noted that some COVID-19 survivors have developed diabetes shortly after infection. "It is definitely worth investigating the rate of new-onset diabetes patients in this COVID-19 pandemic," she said in a statement. Her team has been experimenting with the coronavirus in clusters of cells engineered to create mini-organs, or organoids, that resemble the lungs, liver, intestines, heart and nervous system. Their findings suggest loss of cell fate/function may be happening in lung tissues as well, Chen, from Weill Cornell Medicine in New York, told Reuters.

A study of couples in which both partners were exposed to the coronavirus but only one person got infected is helping to shed light on why some people may be naturally resistant to the virus. The researchers had believed such cases were rare, but a call for volunteers who fit that profile turned up roughly a thousand couples. Ultimately, they took blood samples from 86 couples for detailed analysis. The results suggest resistant partners more often have genes that contribute to more efficient activation of so-called natural killer (NK) cells, which are part of the immune system's initial response to germs. When NKs are correctly activated, they are able to recognize and destroy infected cells, preventing the disease from developing, the researchers explained in a report published Tuesday in Frontiers in Immunology. "Our hypothesis is that the genomic variants most frequently found in the susceptible spouse lead to the production of molecules that inhibit activation of NKs," study leader Mayana Zatz of the University of São Paulo, Brazil, said in a statement. The current study cannot prove this is happening, she added. Even if the findings are confirmed with more research, the contributions of other immune mechanisms would also need to be investigated, the researchers said.

Laboratory studies show that Merck & Co's experimental oral COVID-19 antiviral drug, molnupiravir, is likely to be effective in patients infected with any of the known variants of the coronavirus, including the dominant, highly transmissible delta, researchers said Wednesday in a presentation during IDWeek 2021, the virtual annual meeting of infectious disease organizations. Molnupiravir does not target the spike protein of the virus, which is the target of all current COVID-19 vaccines. Instead, it targets an enzyme the virus uses to make copies of itself. It is designed to work by introducing errors into the genetic code of the virus. Data showed that the cdrug is most effective when given early in the course of infection, Merck said. The company is conducting two large late-stage trials of the drug – one for treatment of COVID-19 and another as a preventive.