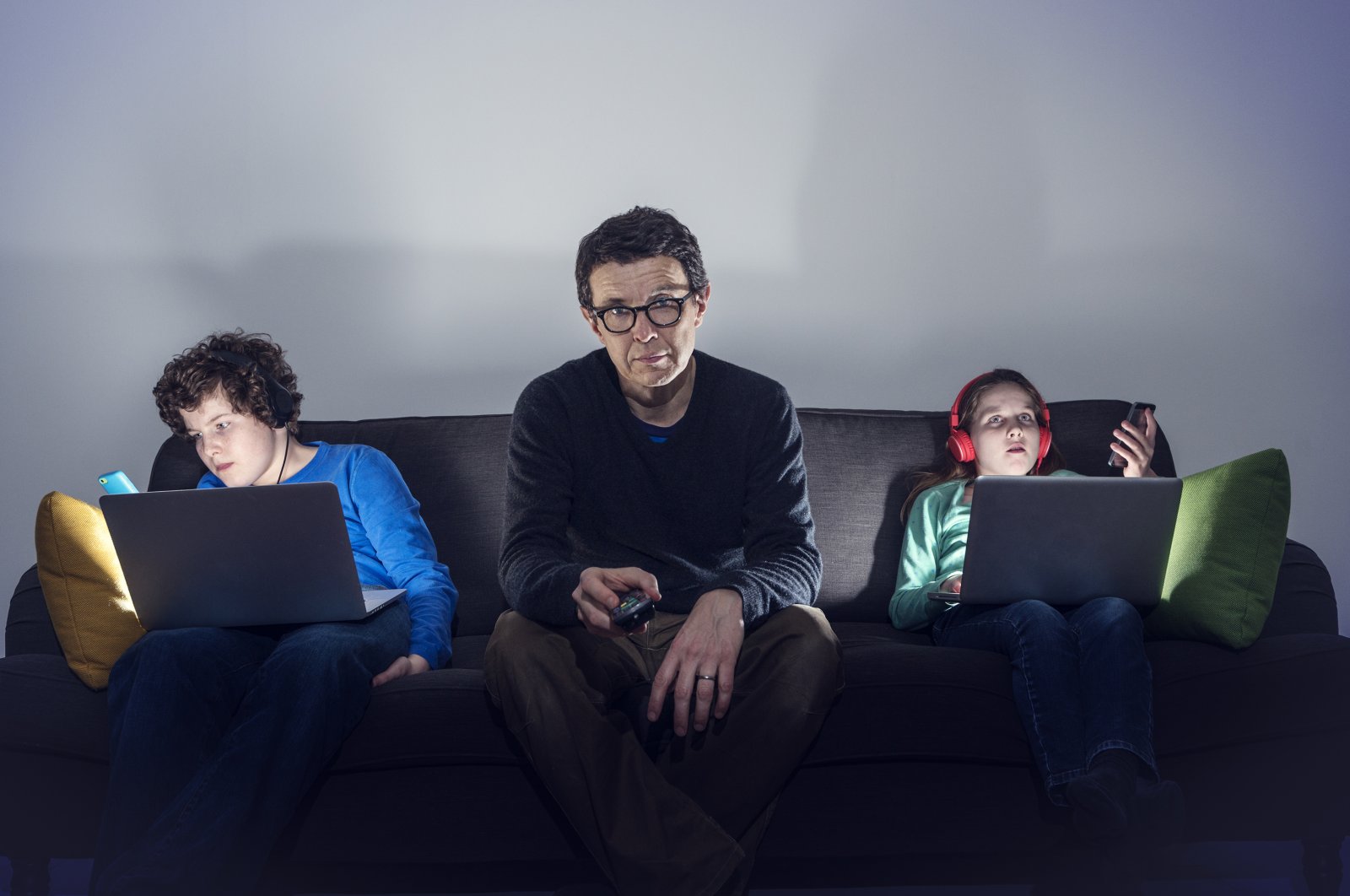 During the stay-at-home period, we all tend to spend more time with TV, mobile phones and computers.
by Anadolu Agency Apr 22, 2020 10:51 am
Edited By Irem Yaşar

While staying at home during the pandemic, all of us have started spending more time online. People should avoid becoming addicted to technology by applying digital detoxes, a Turkish social media expert says

With the spread of the novel coronavirus, the world has been spending more time at home as a precaution, and the more time people spend at home, the more they surf the web.

Unay, who shared his ideas on technology addiction and digital detox during the time of the pandemic, said COVID-19 has affected people more than anything else and made them stay in their homes, adding that remaining isolated and avoiding physical contact is the biggest duty for people in order to overcome the virus.

“It is an indisputable fact that after the closing of schools, the transfer of education to a digital medium and fitting social life into the home, use of the internet and social media massively increased. We can say that the use of smart devices has risen compared to the pre-pandemic period," Unay said.

He said television, which is used in distance education, mobile phones used to communicate with loved ones, especially during isolation, and computers used in working from home are technological devices that people nowadays cannot be separated from.

"This situation is known to be the same in Turkey and other countries," Unay said.

"Apps offering videoconferencing like Google Hangouts Meet, Microsoft Teams and Zoom Cloud Meetings have been downloaded 62 million times from the App Store and Google Play during the pandemic, especially in the third week of March. It is obvious that the viewing rates of digital broadcast platforms have increased," he said.

Unay also said people in isolation at home use digital broadcast platforms much more often to pass the time.

He stressed that the number of mobile visitors to TV+, a digital TV platform which belongs to Turkish telecommunication giant Turkcell, also climbed by 60% in the third quarter of March.

"As of March 12, the number of new members per day had increased by 100% and watch time had increased by 40% compared to previous weeks," Unay said, referring to a statement by BluTV, an internet television platform in the country.

The social media expert underlined that it is common to encounter some problems as a result of using technological tools for such a long time.

He said the excessive use of technological devices such as televisions, computers, tablets and smartphones might cause addiction as well as several health problems.

"For example, visual impairment due to prolonged screen exposure, spinal disorders and pain because of leaning forward while looking at the screen, finger numbness and pain in the arms, eating orders and obesity, and mental problems such as anxiety disorder and depression are some possible problems," he said.

Unay said Kimberly Young, a psychologist and expert on internet addiction disorder and online behavior, evaluated technology dependency based on a number of criteria such as establishing an extreme mental connection with technology and the internet, constantly thinking about activities on the internet, spending more and more time on the internet and with digital devices such as computers, smartphones and tablets to stimulate the pleasure center in the brain and failing in attempts to reduce or eliminate technology addiction.

Restlessness, depression and anger as signs of withdrawal symptoms in cases of reduced use of technology, exceeding the planned technology usage period, disruption of relationships with family, work colleagues and friends as a result of excessively using technological tools, trying to prove that you are not dependent on technology by lying to a therapist or someone else, and using the internet and technology as a means of protection to avoid negative situations are also among the main symptoms Young determined, Unay added.

Referring to Young, an academic and psychology professor who founded the Center for Internet Addiction in 1995, Unay said experiencing five of the eight diagnostic criteria listed above is sufficient to say one is a technology addict.

Unay underlined that people should use technology to make life easier. "Technology will make our lives easier if it is used properly. But it has now been scientifically proven that it causes addiction due to overuse and misuse. To protect ourselves from this situation, we need to stop using technological devices, that is, to detox."

Addiction can be explained as an inevitable desire for something that cannot be resisted and suffering when it is not there, he stressed.

"Detox is trying to get rid of addictions that poison us physically and spiritually. It should always be remembered that technology addiction, like other bad habits, gives us mental and physical harm and poison. That is why doing a digital detox saves people from this dangerous addiction and serves as a precaution against it," Unay added.

On how to avoid adverse effects of this addiction, Unay said: “We can start detoxing by disconnecting from smart devices for short periods and reading books that you have not read yet. Turn off your phone's notifications. You do not have to know, control and share everything."

The expert said that extending the "interval" of checking emails will diminish continuous use.

He advised cleaning up the groups one has joined on social media platforms, removing people that one hardly or never communicates with, and leaving social media groups that might be unnecessary.

"Spend a certain period in your home to be completely away from technological devices," he said.

Unay said that during these days when people stay at home, they should avoid excessive use of the internet, television and smart devices. To succeed in this, he said, people should engage in different activities at home as a family or individually.

"We can play games with our children in our house such as Taboo, Monopoly and Ludo, which we can be played in groups," he said, adding that while at home, families can also find new hobbies.

"For example, it will be useful to try different recipes and find various recreational activities. We can plan reading hours for the family or have a habit of listening to audiobooks on the internet, or read books on different topics and genres as well," he added.

Unay concluded by saying that during this period, they should be "conscious users" of technology to benefit from it effectively and efficiently.