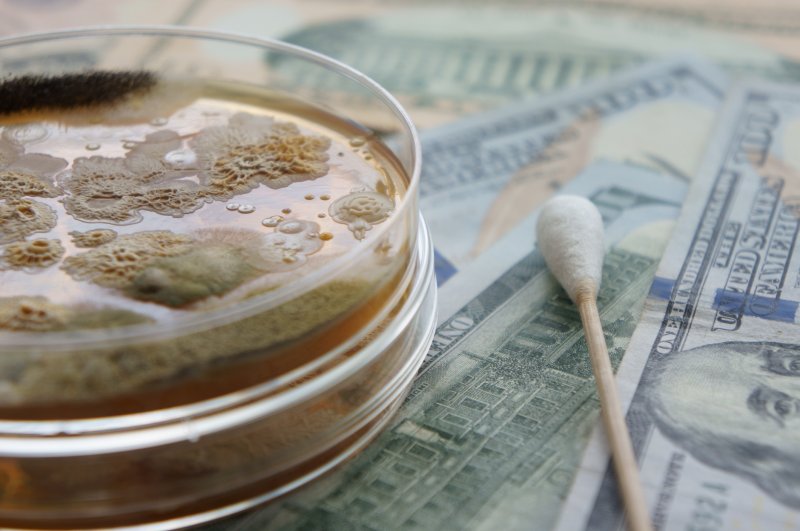 Money is constantly changing hands – literally. In doing so, it collects lots of bacteria. (I repeat, bacteria, not viruses). While many of them are harmless to healthy people, pharmacists say, you should nevertheless wash your hands regularly and thoroughly if you handle money.

The germ load on banknotes and coins is similar to that on door handles in public toilets and grab bars in public transport, pharmacists point out, adding that only a fraction of them normally stick to your fingers, though.

The most common microbes found on paper money include mouth microbes from licking fingers to separate new bills, and fecal matter, which serves to show that some people do not wash their hands after using the bathroom. Bacteria that cause stomach ulcers, staph infections, including MRSA, and acne have also been found on paper currencies.

After entering the body through breaks in the skin or by swallowing, for example, these germs can cause serious infections in people with a weakened immune system. Contaminated money can cause food poisoning as well as skin, respiratory and gastrointestinal diseases.

Special care is called for when handling food. If you touch germ-contaminated money and then, say, minced meat, the germs can multiply in the meat. So, it's important to wash your hands for about 30 seconds both before and after handling food.

Scientists have long known that various types of germs and bacteria can survive on paper currency, and have issued warnings about handling banknotes. And also, contrary to popular belief, the copper in coins doesn't have an antibacterial effect. Copper ions can prevent the growth of some germs, but they can't kill them.