How does COVID-19 typically progress? A timeline for majority of cases 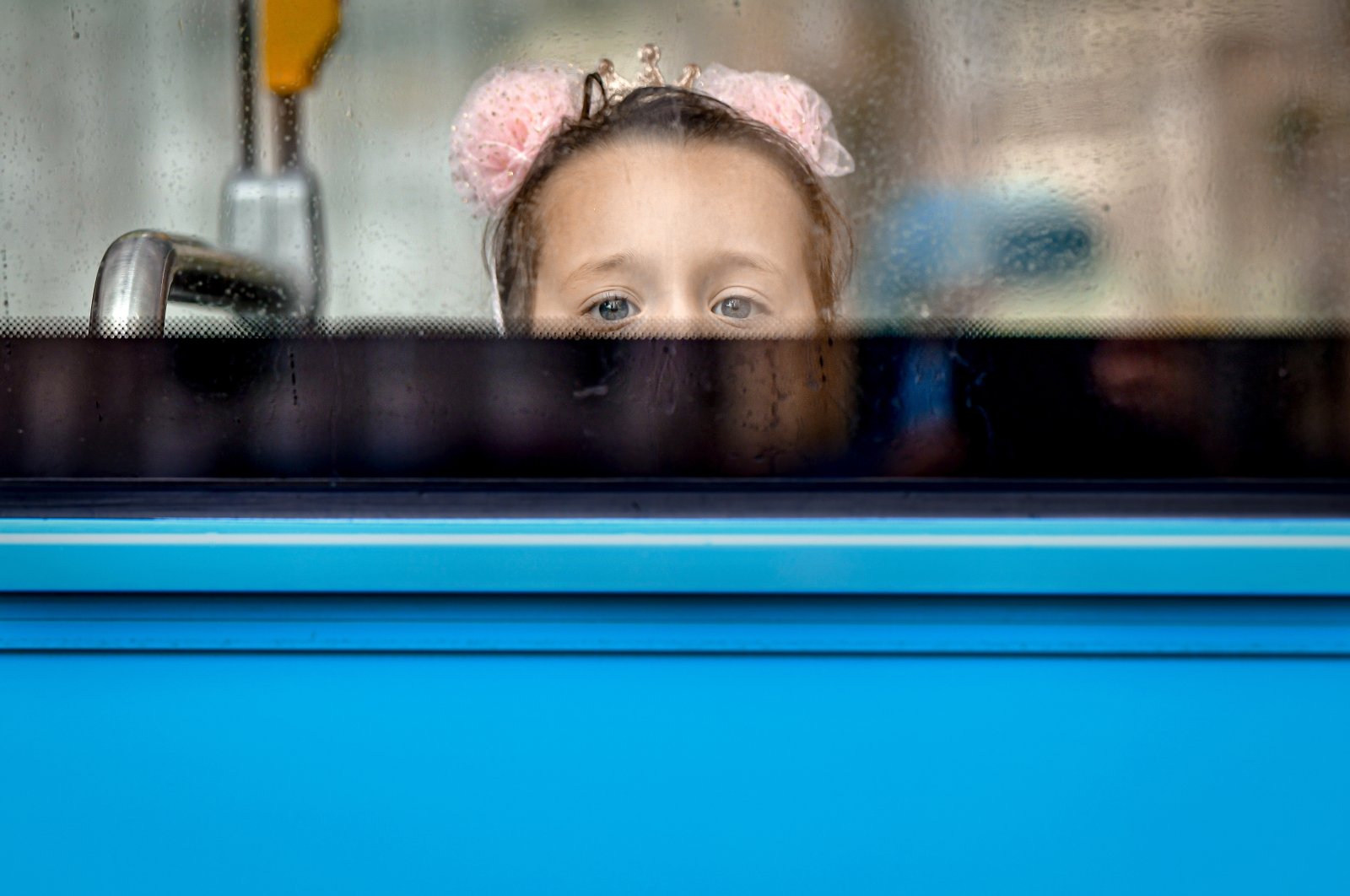 A little girl peers from behind a window bus upon arriving with kindergarten colleagues for a day of joint activities in Bucharest, Romania, Wednesday, Aug. 19, 2020. (AP Photo)
by Yasemin Nicola Sakay Sep 01, 2020 2:30 pm

When are COVID-19 patients most infectious? When does the disease reach its decisive peak? When is it safe to visit those who have recovered? Here’s a timeline of the coronavirus’ progression and what experts have to say about it

The higher the mercury rose, the lower those face masks got – under the nose, under the chin and now they seem to be permanently glued to people's elbows. But this irresponsible behavior has been costing Turkey greatly, and the country is almost back to figures pre-lockdown when it comes to the number of daily cases.

While a tired health minister with sunken eyes continues to shout down social media every day and urges people not to flush health personnel's months-long diligent work down the drain, these warnings are only resonating with some, meanwhile, some local and international tourists continue to endanger others by refusing to partake in social distancing and mask-wearing practices.

However, this recent worrying rise in COVID-19 cases across Turkey has prompted closer examinations into positive cases and analysis of the recovery process. Coupled with expedited vaccine trials and research for possible treatments, this has enabled medical experts to better gauge the coronavirus' incubation and transmission periods, giving doctors a rough timeline on how the disease develops.

Speaking to Demirören News Agency (DHA) last week, Prof. Yeşim Taşova from the Ministry of Health's Coronavirus Scientific Advisory Board and the head of the Infectious Diseases Department at Çukurova University's (CU) Balcalı Hospital in southern Adana province, the first 48 hours before symptoms surface and the first day when they start showing such signs were the periods with the highest level of contagion.

The first week and specifically the first 48 hours before the patient exhibits symptoms is the most infectious because a lot of viral shedding happens. On average, people start to exhibit symptoms on day five of being infected with or exposed to the coronavirus.

In the first two days of COVID-19's onset, patients have a heavy viral load, meaning they have a lot of viruses circulating in their bodies. A Hong Kong study from March found that viral load peaks within the first week of symptoms' onset. Severe cases have also been found to have a heavier viral load, according to another study in China.

By wandering out in the streets and mingling with others, these infected people put others at risk of infection, making them the silent superspreaders with their high viral load. This is where masks play a preventative and crucial role as these people, unknowingly a carrier of the virus, are likely to pass the virus on.

Although the spreader may not get that sick, the next person to catch the virus might end up severely ill, such as a person with chronic illness or the elderly.

Taşova says the most contagious periods are the incubation and prodromal periods when symptoms such as cough, fever, generalized muscle pain and body ache first start to appear after contact with a positive case.

"This could be as short as two days and last as long as, if not longer than 14 days," she added.

The first week of onset

The first week of disease onset is when all the symptoms start to appear – for some it's gradual, while for others it hits all at once and hard on. Fever, joint and muscle aches, changes in smell and taste and diarrhea surface in patients, and the respiratory symptoms follow soon after. After the 7-day mark, generally and not always, is when patients start experiencing shortness of breath, coughing and pneumonia-like symptoms. Some have the infamous dry cough while others' may present with mucus, full of the lung cells killed off by the virus.

These markers could indicate the start of the acute period when symptoms reach their height and the illness presents itself full-on.

As with many diseases, the earlier the disease is detected the better the prognosis and easier to treat, or at least control, before widespread damage occurs in the body. Symptoms approximately last nine-10 days.

If the illness goes unnoticed or the patient doesn't receive treatment in time, around eight and 10 days after infection is when things go downhill and more intervention is needed. Yeşimova says that's the timeline they have seen oft-times in cases across Turkey. Some cases do recover on their own at home.

"Roughly eight days after admission to hospital, we see patients needing to be admitted to the ICU with acute respiratory distress (ARD)," she said, adding that this progress can continue for two to three weeks, getting progressively worse if not treated.

"The more severe the case, the longer it takes for the symptoms to disappear," she added.

No transmission during recovery?

Noting that in all infections, the "convalescence period" or the recovery period after the disease can see patients feeling completely well or still experiencing symptoms such as fatigue and body aches, Taşova said they have not observed instances of the virus being transmitted in this phase.

Taşova, however, says current findings show that this period has extended in COVID-19 cases, especially over the summer. In China, the earliest cases have tested positive as much as 70 days after recovering.

Calling this a transitionary period toward healing, she says recovery starts when symptoms start to improve or get resolved.

"Contagion happens in the first 48 hours when no symptoms have even appeared but gradually start to in the following days. After that, the reproduction rate of the virus gradually decreases and contagiousness decreases. We know that the person who has had the disease is not contagious in the light of our current knowledge," she said.

This doesn't mean that the patient can immediately venture outside and start mingling with others again the first day they feel better, though.

When is the illness really over?

Considering that the currently-advised self-isolation period is 10 to 14 days, doctors recommend waiting at least three days after symptoms start to subside. The first symptoms also must have surfaced at least 10 days prior. Meanwhile, experts at the U.S. Center for Disease Control (CDC) say patients should wait at least 10 days after they get a positive result from testing to leave self-isolation.

Clinics and health care facilities across Turkey are currently running polymerase chain reaction (PCR) tests on the daily for tourists coming from countries where being COVID-19-negative is mandated for flying and to avoid quarantine, such as Germany. These tests are done by taking swabs of the nose and throat to detect active infection.

Private enterprises and labs can charge anywhere from 30 to 120 euros, while tourists also have the option of going the government route by making a TL 110 ($14.93) payment to Halkbank and going to the nearest state hospital with approved testing facilities with the receipt. Here is a list of the labs and hospitals authorized to do the testing. The test results can take anywhere from an hour to 48 hours to come through.

Testing, however, may not be the most reliable indicator of recovery.

Stating that PCR tests can continue to turn out positive for 30 or even 47 days in some patients, Taşova said: "PCR finds a part of the nucleus of a microorganism. So it can also detect a dead microorganism. Studies on this were also carried out in Ankara ... But at that point, they were not contagious."

Though recent re-infection cases have raised doubts about immunity and made scientists revisit contagiousness.

Taşova said researchers are investigating whether such reinfection cases are happening because of the virus mutating or the immune system being insufficient.

"We know that (severe cases develop) antibodies and vaccination studies are going well. Although the reason is still not clear, 160 people in South Korea have tested positive again for the virus for the second time, coming out negative, entering recovery but then turning positive again. Whether these people are infectious or not, only time will tell."