How will this coronavirus pandemic end? 3 possible scenarios 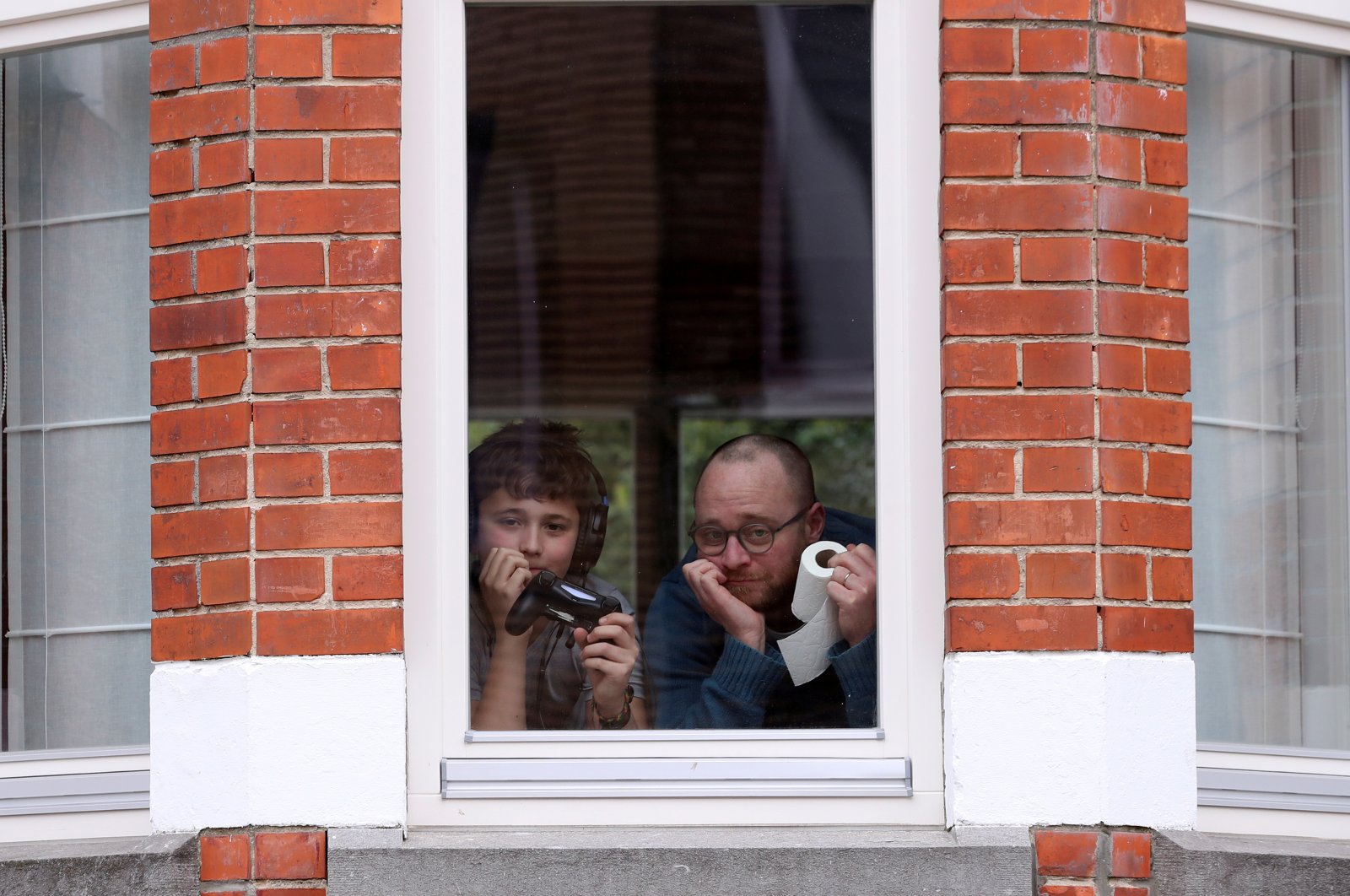 Resident Laurent Lanthier and his son Robin pose behind the window of their home during a coronavirus lockdown imposed by the Belgian government in an attempt to slow down the coronavirus outbreak, in Brussels, Belgium, March 19, 2020. (Reuters Photo)
by Yasemin Nicola Sakay Mar 24, 2020 2:10 pm

The coronavirus outbreak recently took a troubling turn when it was declared a pandemic, and although it erased hopes of containment, there is still much that can be done to defeat it. Here are a few ways how this pandemic could play, or hopefully die, out

The spread of the novel coronavirus SARS-CoV-2 is showing no signs of stopping in parts of the world, infecting an increasing number of people and taking more lives every day. The rapid rate of transmission has left the health care systems in some countries under great strain, pushing governments to turn malls into makeshift pandemic hospitals (Iran), empty dorms and hotels into quarantine zones for the infected (the U.S.) and ice rinks into temporary morgues (Spain). However, not all hope is lost.

Out of over 382,000 confirmed cases, more than 102,000 people have recovered, in contrast to 16,500 who have died due to COVID-19, the disease caused by the virus, according to Worldometer data. On top of that, only 5% of the cases have been deemed critical, while 95% show only mild symptoms.

Meanwhile, there’s a heated race going on in the pharma world with drugmakers and researchers desperately trying to come up with a vaccine or a treatment to end the pandemic once and for all. Gilead Sciences Inc.'s experimental drug, remdesivir, is already in clinical trials, the Japanese-made flu drug favipiravir has shown to be effective in some cases in China, and Moderna says its messenger RNA-based vaccine could be ready by fall.

But these developments aside, there’s only one thing on everyone’s minds: When will this pandemic finally end? And how?

The first line of defense and the most hopeful scenario was containment. By identifying and quarantining the sick, medical experts hoped they could stem the virus from spreading in communities and restrict it only to China and nearby territories. After all, this was the strategy used to contain the 2003 SARS (severe acute respiratory syndrome) outbreak, which ended in success.

However, if there is anything the last two months have shown us, it is that we’ve exhausted all of our chances to contain the outbreak to just a few locations, hence the World Health Organization (WHO)'s declaration of the coronavirus as a pandemic after its widespread and unstoppable global march. Containment was, indeed, the biggest hope of the science world, but it gave humanity a very small window of opportunity to do so. The lack of containment is not surprising, given that the “R0” (pronounced "R naught," a throwback to the 2011 movie "Contagion") – which is the reproduction number of the virus showing how many people one person can infect – is thought to be between 1.5 and 3.5, according to The Imperial College group. The fact that many were late to recognize the dangers posed by such a disease and continued to go about their daily lives throwing caution to the wind made matters worse much quicker.

Besides its easy spread, which happens through respiratory droplets of an infected person’s sneezes or coughs and contaminated objects, there were also other challenges that came with containing the virus' transmission. Its spread was silent but deadly. Most cases of COVID-19 went unnoticed as they were either asymptomatic or showed very mild symptoms, and the virus had a long incubation period to boot – scientists have said it can be anywhere from two to 27 days, with a median of 5.1 days.

The ever-slow rollout of diagnostic kits and long testing times also didn't help. Despite the WHO's Tedros Adhanom Ghebreyesus saying on March 2 that he believed this spread of disease still could be contained, many virologists and epidemiologists now concur that the horse is out of the barn and containment has been checked off the list.

But just because containment failed doesn't mean we should be awaiting infection or certain death. We can still save many, many lives, limit its spread and buy precious time so that scientists can come up with a cure.

Considering the current path we are going down, the coronavirus pandemic could still end in three ways. These three possible scenarios are: people will become immune to the virus, an effective vaccine will be developed or the virus will mutate and lose its potency with time.

"Many people will eventually become immune, stopping the virus from spreading, or the vaccine will be found and people will be made immune in this way. The third possibility is that the virus will mutate and will lose its ability to infect humans. The pandemic can only end with one of these three scenarios," Mehmet Ceyhan, a professor at Ankara's Hacettepe University, told Anadolu Agency.

The first scenario refers to herd immunity, which the U.K. first wanted to achieve and then backtracked after criticism for risking the lives of the elderly and the chronically ill. Herd immunity is achieved when enough people in a population are immunized against the virus, either by becoming infected and recovering or by being vaccinated, to be able to effectively stop that disease from spreading.

The threshold for collective immunity is thought to be about 50 to 70%; however, the more contagious the disease, the higher the number of immunized people we need to stop it in its tracks. Hence, quarantine, confinement and isolation measures are important. Once the contagion rates drop to one or below, the epidemic more or less comes to an end.

The U.K. initially claimed that herd immunity would slow the spread of the virus and delay its peak until the summer months when the National Health Service (NHS) would be less overwhelmed. But, of course, the high risks and fast spread associated with COVID-19 would have led to high rates of hospitalization and use of critical care facilities.

Especially with no effective vaccine in sight, herd immunity still seems to be a risky gamble.

The second scenario is seen as the most probable option to eradicate the disease for good. Scientists are working at breakneck speeds to develop antiviral treatments or a vaccine. From mRNA vaccines, which do not introduce any virus to the subjects and constitute no viral risk, to antibody tests to identify powerhouses within to fight the virus, there are many promising developments.

The problem with this approach is it is, unfortunately, very time-consuming and expensive. It still could be a year or more before such vaccines pass the necessary safety and efficacy tests in clinical trials. Investment costs for inoculation are also estimated to cost as much as $800 million.

In some cases, a rushed vaccine that hasn't gone through the usual protocol and phases that require lengthy testing on animals before human trials could end up making people sicker rather than preventing infections.

Studies have suggested that coronavirus vaccines could cause immune enhancement, which leads to the inoculated person developing a much more severe form of the disease, instead of protecting against the infection. Toxicity and side effects also remain an important concern.

The last scenario is a mutation. All viruses accumulate mutations over time or undergo changes in their genomes. Scientists are hoping that SARS-CoV-2, which shares 85% genetic similarity to original the SARS virus, will mutate in a potentially beneficial way, similarly to how the SARS virus behaved in the 2002 outbreak when it mutated into something much more severe but with a much lower infection rate for humans, practically spelling its own death.

Compared to rhinoviruses (the primary cause of the common cold), coronaviruses have a slower mutation rate because they have a process called "proofreading" which causes them to move not quite so rapidly. This process happens during DNA replication (copying) when they “check their work” with each base they add to their genomes. This gives a better chance of developing a vaccine.

For example, if the virus mutates to cause more severe symptoms, it may reduce infection rates as it makes people sick enough to stay in bed. This also brings the possibility of vaccine ineffectiveness and resistance.

One thing is for sure, there's still much we still don't know about the new coronavirus, so it's hard to tell just how high a mutation rate it has. Its ancestor SARS had a relatively low mutation rate, but influenza is on the other end of the spectrum and thus reoccurs every year. Experts are nevertheless closely tracking the virus and its behavior to understand how it spreads and whether different strains of it are emerging.