Hydroxychloroquine for COVID-19? Self-medicating with malaria drugs could be lethal, doctors warn 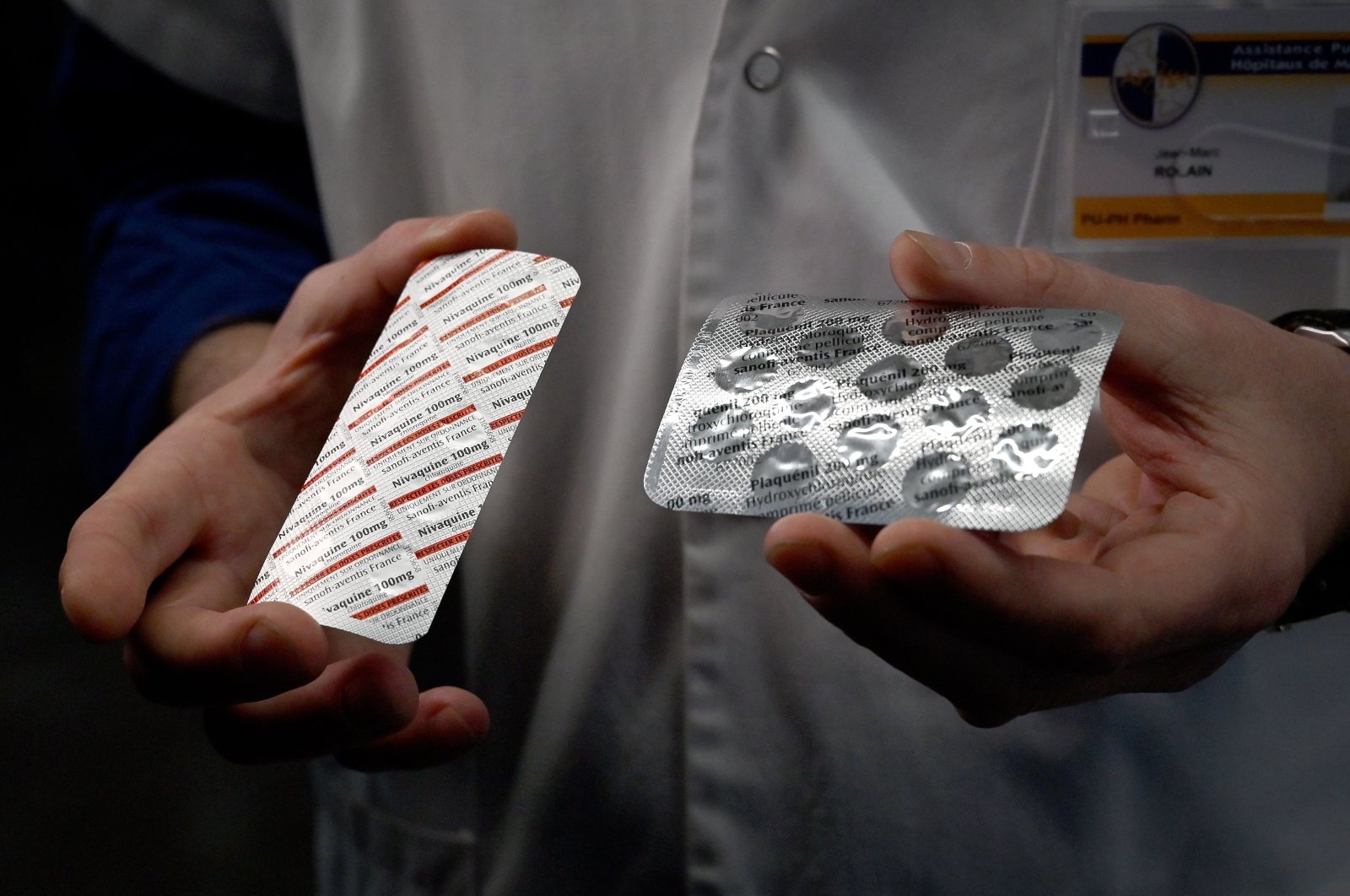 In this file photo taken on February 26, 2020, a medical staff shows at the IHU Mediterranee Infection Institute in Marseille, packets of a Nivaquine, tablets containing chloroquine and Plaqueril, tablets containing hydroxychloroquine, drugs that have shown signs of effectiveness against coronavirus. (AFP Photo)
by Daily Sabah with Wires Mar 29, 2020 2:40 pm
RECOMMENDED

Could a pair of decades-old, relatively inexpensive drugs be the solution to the novel coronavirus pandemic? Especially recently, since a few trials have shown promise for chloroquine and hydroxychloroquine and President Donald Trump made groundless claims that their risks are “low” and “well-known,” more and more people have rushed to pharmacies to stock up on the antimalarial drugs.

But hey, hold your horses and do not – under any circumstances – try to self-medicate or use these drugs as a way to ward off COVID-19 without medical supervision.

Doctors have amped up their warnings ever since an Arizona man died and his wife was left battling for her life in critical condition after they ingested chloroquine phosphate – an aquarium cleaning product similar to the drugs that have been hailed as a "gift from God," per Trump.

Instead of using the antimalaria drug itself, the couple, in their 60s, swallowed an additive used in cleaning aquariums and fish tanks which shares the same active ingredients as those drugs – chloroquine phosphate – prompted by Trump's tweet about the combination of hydroxychloroquine and azithromycin and it having “a real chance to be one of the biggest game-changers in the history of medicine.”

Experts have played down claims that the pair of malaria drugs will become go-to medications for treating COVID-19, saying the therapy must be tested rigorously to assure its safety and efficacy.

Chloroquine has been used to treat malaria since the 1930s. Hydroxychloroquine came along a decade later and has fewer side effects. The latter is sold in generic form and under the brand name Plaquenil for use against several diseases.

The drugs can cause heart rhythm problems, severely low blood pressure and muscle or nerve damage. Plaquenil's label warns of possible damage to the retina, especially when used at higher doses, for longer times and with certain other medicines such as the breast cancer drug tamoxifen.

"Chloroquine is an extremely toxic drug with a terrible side effect profile. Hydroxychloroquine is far safer, but its side effects are still significant," Meghan May, a microbiologist at the University of New England College of Osteopathic Medicine in Biddeford, Maine, wrote in an email. "If it is not abundantly clear that it is beneficial, giving this drug to a critically ill patient feels risky."

Saying these drugs are safe to use for COVID-19 poses a great danger to people's health, according to professor Dr. Ahmet Aydın, the head of the Pharmaceutical Toxicology Department and vice-rector of Yeditepe University.

Pointing out that these drugs are also used to treat disorders like rheumatoid arthritis, juvenile idiopathic arthritis, discoid and systemic lupus erythematosus in combination with other treatments, Aydın said apart from a few limited studies, no clinical research or controlled studies is proving the effectiveness of these drugs in treating COVID-19 yet.

Aydın echoed May's views, stressing that trying to self-medicate with these drugs can also lead to eye disorders such as seeing abnormal colors, impaired visual field, difficulty in focusing the eye or opacity in the corneal layer of the eye, as well as movement and muscle disorders.

Aydın listed other possible side effects, as such some cases of cardiomyopathy with fatal consequences and severe heart failure and heart palpitations or abnormal beating of the heart.

The drugs can cause bone marrow suppression, leading to anemia, a decrease in the number of white blood cells and platelets.

Experimental data has shown that the drugs have the potential to cause gene mutations, DNA breaks and chromosome breaks.

Limited studies have been conducted on the cancer-causing potential of quinine-derived drugs, including hydroxychloroquine. That’s why this drug should be used only if absolutely necessary.

Aydın emphasized that drugs are vital health products that have been developed for the prevention, diagnosis and treatment of certain diseases and are used for specific cases.

“Drugs are among the most critical health products for sustaining life,” he said.

“Medicines should be used only on the recommendations of professionals such as physicians and pharmacists, after weighing the benefits and associated risks. When these principles are followed, they protect human health, and when not followed, they cause undesirable effects,” he added.