Is a coronavirus treatment on the horizon? Turkey to start testing plasma therapy with survivors' blood 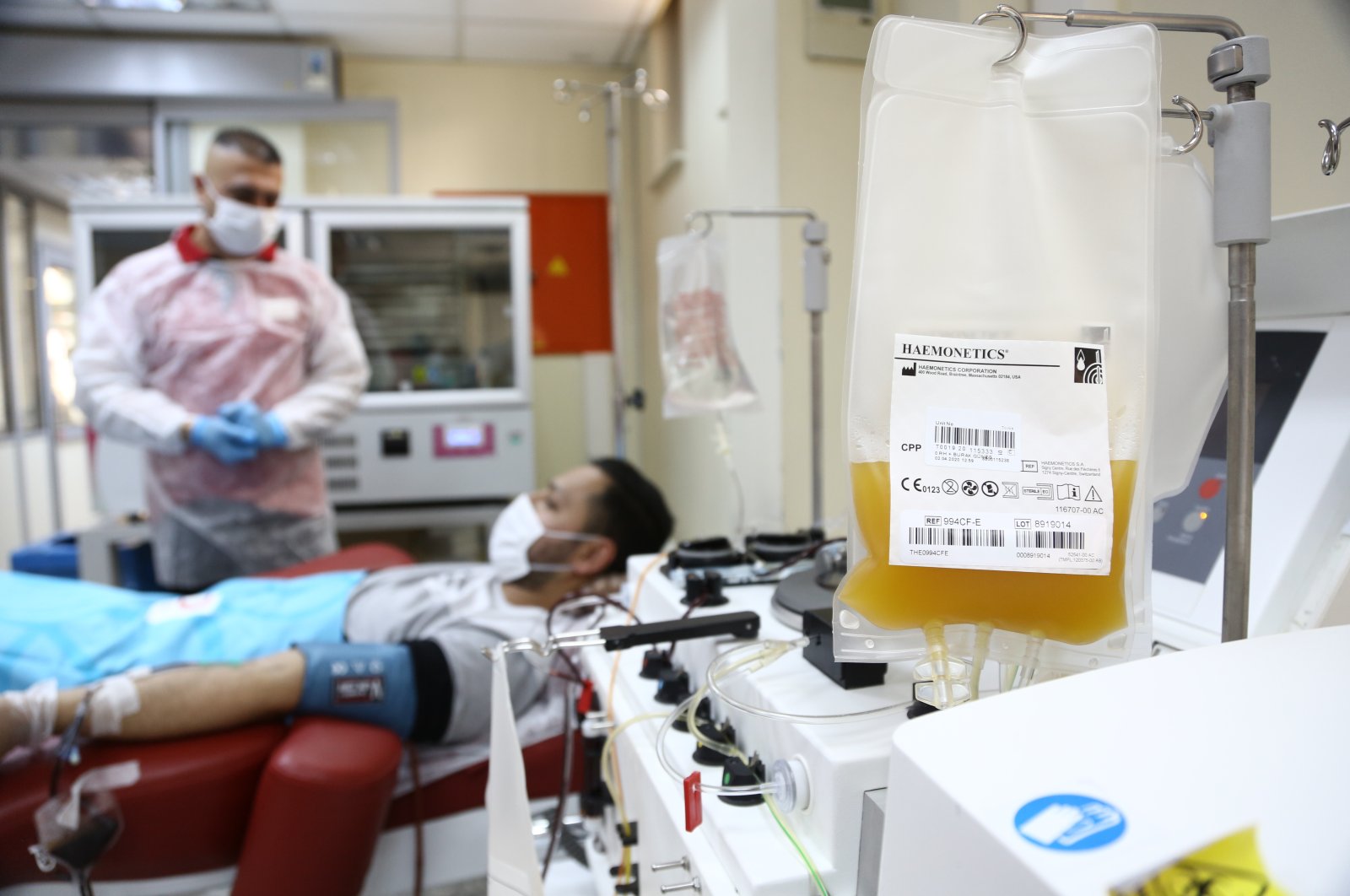 The yellow liquid part of the blood is called the plasma, and it will be used to create an immune response in current patients. (Courtesy of the Turkish Red Crescent)
by Daily Sabah with AP Apr 03, 2020 2:55 pm
Edited By Yasemin Nicola Sakay

Pandemic hospitals and Turkish Red Crescent (Kızılay) health centers across Turkey are gearing up to test if a 100-year-old treatment used to fight off flu and measles outbreaks in the days before humanity had vaccines might just work for COVID-19, too. Using blood donated by patients who have recovered, medical experts are hoping that the serum therapy, tried more recently against SARS and Ebola, will offer effective treatment for the sick and offer vaccine-like temporary protection for health care workers and those with weak or suppressed immune systems.

Doctors in China attempted the first COVID-19 treatments using what the history books call “convalescent serum” – today, known as donated plasma – from survivors of the new virus. Besides China, Israel and the U.S. have also started to get positive results from the therapy.

Now, with permission from the Health Ministry and the Turkish Red Crescent, a network of Turkish hospitals are also waiting to begin infusions.

There's no guarantee it will work in everyone, nonetheless, it is hugely promising and the historical evidence is there to back it up.

Speaking to the press via Zoom on Friday, Kerem Kınık, the president of the largest humanitarian organization in Turkey, said they are working day and night to facilitate the process and make the availability of the experimental therapy widespread.

But how exactly does this therapy work and who can partake? Let's have a look.

What exactly is this therapy?

When a person gets infected by a particular germ, the body starts making specially designed proteins called antibodies to fight the infection. After the person recovers, those antibodies float in survivors’ blood – specifically plasma, the yellow liquid part of blood – for months, even years.

The therapy will test if giving infusions of survivors' antibody-rich plasma to COVID-19 patients, who have been intubated in ICUs and begun to show alveolar damage or those having trouble with breathing, would boost their own body’s defenses to help fight off the virus. Instead of therapy to replace all other conventional treatments, it will be used as a complementary therapy in severe cases, Kınık said.

He said the possible therapy would become "one of the world's most effective applications" in the fight against the coronavirus.

Acknowledging that there still is no perfect cure, Kınık said, for the time being, we have to give all the options a shot. However, he also cautioned that the therapy can have some side effects in certain people.

"This method is no miracle or cure, but it is one that has been known and used for years as a method of treatment. The advantage of this method is that these antibodies mean extra support for patients with weakened immune systems. This method drastically speeds up the recovery process, lessens virulence and reduces the destruction of lung tissue," he said.

As much as regular plasma transfusions are a mainstay of medicine, they can cause lung damage, coronary failure or delayed immune response, although rarely, he added.

Could it act as a vaccine?

Sort of, it works around the same principle but unlike a vaccine, any protection would only be temporary and offer passive immunization.

A vaccine trains people’s immune systems to make their own antibodies against a target germ – which could be attenuated or inactivated viruses and bacteria or small parts of them. When these germs enter our bodies again, they know how to deal with or defeat them. The plasma infusion approach would similarly give people a temporary dose of someone else’s antibodies that are short-lived and require repeated doses.

These plasma infusions were used most famously during the 1918 flu pandemic and against numerous other infections, such as measles and bacterial pneumonia, before vaccines and modern medicines came along. Long ago research was sketchy. But in the Journal of Clinical Investigation earlier this month, Dr. Arturo Casadevall of Johns Hopkins University’s school of public health and Dr. Liise-anne Pirofski of New York’s Montefiore Health System and Albert Einstein College of Medicine.cited evidence that 1918 flu patients given the infusions were less likely to die. And a 1935 medical report detailed how doctors stopped a measles outbreak from sweeping through a boarding school using “serum” from prior patients.

The old-fashioned approach still is dusted off every so often to tackle surprise outbreaks such as SARS in 2002 and in 2014 when Ebola survivors’ plasma was used to treat other patients during the West Africa epidemic. Even during those recent outbreaks, strict studies of the technique were not done, but Casadevall said there were clues that the plasma helped.

A more modern approach is to brew this type of antibody in the lab, something Regeneron Pharmaceuticals and other companies are working on. Using blood from COVID-19 survivors is a decidedly more labor-intensive approach.

How is the plasma extracted?

Blood banks take plasma donations much like they take donations of whole blood; regular plasma is used in hospitals and emergency rooms every day. If someone’s donating only plasma, their blood is drawn through a tube, the plasma is separated and the rest is infused back into the donor’s body. Then that plasma is tested and purified to be sure it doesn't harbor any blood-borne viruses and is safe to use.

For COVID-19 research, the difference would be who does the donating – only confirmed people who have completely recovered from the coronavirus. The Turkish Red Crescent says medical experts will measure how many antibodies are in the unit of donated plasma and then from there, figure out what's a good dose for each individual.

"Here, 14 is the magical number," he said, adding: " After you recover from a disease like COVID-19, your blood has many fighters, or anti-coronavirus antibodies called anti-SARS-CoV-2s in this case. These peak in a recovered patient's blood on the 14th day after recovery."

Kınık said they aren’t worried about finding volunteer donors but acknowledge that it will take some time to find the appropriate ones and build up a stock.

"We are inviting all those eligible to stop by our centers 14 days after they have recovered. We will also be in contact with them, calling to invite them to the designated centers."

There are several prerequisites to be a plasma donor as part of the scheme. Kınık says the first and most important one is that the patient must have tested positive for the coronavirus, so there must be evidence that they were, indeed, infected by it. Secondly, they must be discharged from the hospital and declared virus-free. Then the waiting game begins. 14 days after the patient shows no symptoms of the disease, they are again tested via nasopharyngeal swab, the results of which should be negative for the virus and via blood tests, which see if the patient has produced the necessary antibodies. For this process, Kınık says, they will use the molecular polymerase chain reaction (PCR) method.

Those younger than 18 and older than 65, those with chronic illnesses, those taking certain medications such as corticosteroids, those who are pregnant, those who are underweight or suffering from unexplained weight loss as well as those with hepatitis, syphilis or HIV are not allowed to donate.

When will this process start?

Kınık said starting from next week, the Red Crescent and hospitals across Turkey will start collecting plasma.

He said the logistical details are still being worked out, but that they have chosen four hospitals in Istanbul to operate under this scheme and a number of centers for collecting plasma in Ankara and İzmir. The donated plasma will be transferred to the places that need it the most, he added.