Not my tempo: Hungarian conductor gets COVID-19 shot onstage 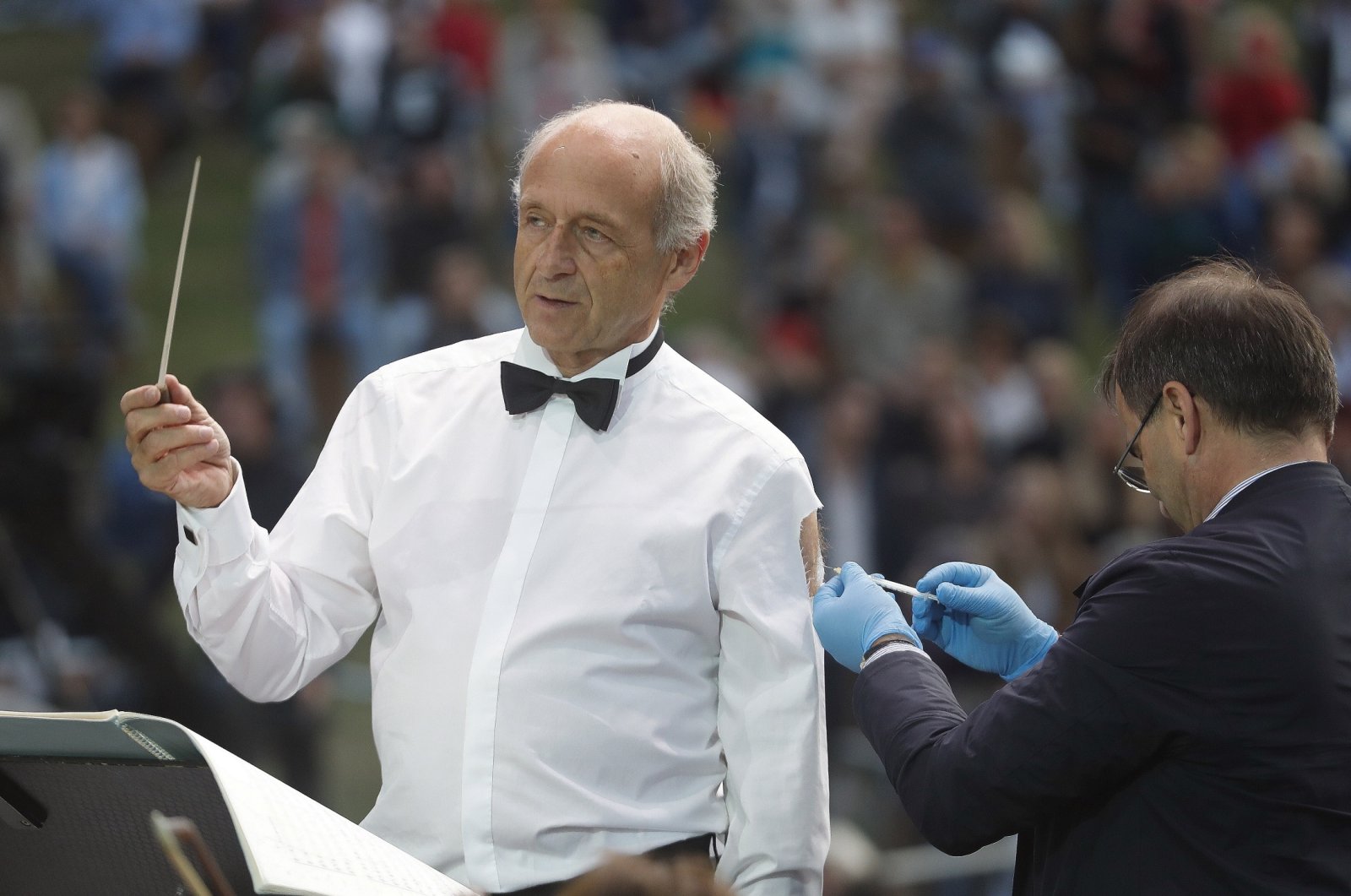 Ivan Fischer, the founder of the Budapest Festival Orchestra, receives his third dose of the COVID-19 vaccine as he conducts the orchestra, during their free concert in Budapest, Hungary, Aug. 25, 2021. (AP Photo)
by Associated Press Aug 27, 2021 2:01 pm
RECOMMENDED

Vaccination efforts are ongoing across the globe as the COVID-19 pandemic rages on with new outbreaks, particularly with the delta variant. So, it is important to encourage people to get their jabs. What is art good for, if not for encouragement? A Hungarian orchestra seems to agree with that sentiment as its conductor received his booster shot onstage during a free open-air concert in Budapest.

Budapest Festival Orchestra conductor Ivan Fischer removed his jacket on Wednesday, to reveal a white dress shirt with a hole cut out of the sleeve. As he kept his baton moving and as the orchestra played on a doctor administered the shot, Fischer's third dose, to applause from the crowd.

The carefully choreographed action was an attempt to "further raise awareness of the need for vaccination" in Hungary, the orchestra's managing director, Orsolya Erdodi, said.

"Vaccination can give us the chance to live and work in a normal way of life again, just as we did before the coronavirus pandemic," she said.

Hungary has enjoyed a comparative summer reprieve from the COVID-19 pandemic after a devastating spring, when the country for a time had the world's highest number of virus deaths per capita.

While confirmed cases and deaths are down, the vaccination rate has also slowed dramatically. Hungary was an early vaccination leader, using doses from Russia and China as well as ones procured through the European Union to conduct one of the EU's fastest immunization campaigns.

More than 32% of the Central European country's adult population has not received the first shot amid stubborn vaccine hesitancy. Many other European countries have since overtaken Hungary's vaccination rate.

Hungary's chief medical officer has described a recent slow uptick in cases as the beginning of a "fourth wave," dominated by the highly transmissible delta variant.

With the threat of another surge in cases looming, the Budapest Festival Orchestra decided to make a push for vaccines and vigilance against the coronavirus.

Fischer, a frequent champion of progressive social causes, not only received his booster shot, but members of his prestigious orchestra took rapid COVID-19 tests on stage Wednesday as the music played on.

"Further vaccination and testing are the most important thing in order to prevent the spread of the coronavirus, to maintain a normal life and to allow people to go to concerts," Erdodi, the orchestra's managing director, said.

After reports emerged in July that China's Sinopharm vaccine, which Hungary uses, may provide poor protection to older adults, Hungary became the first country in the 27-member EU to offer booster shots to individuals who want them.

As of Thursday, 240,000 people in Hungary had received a booster jab.