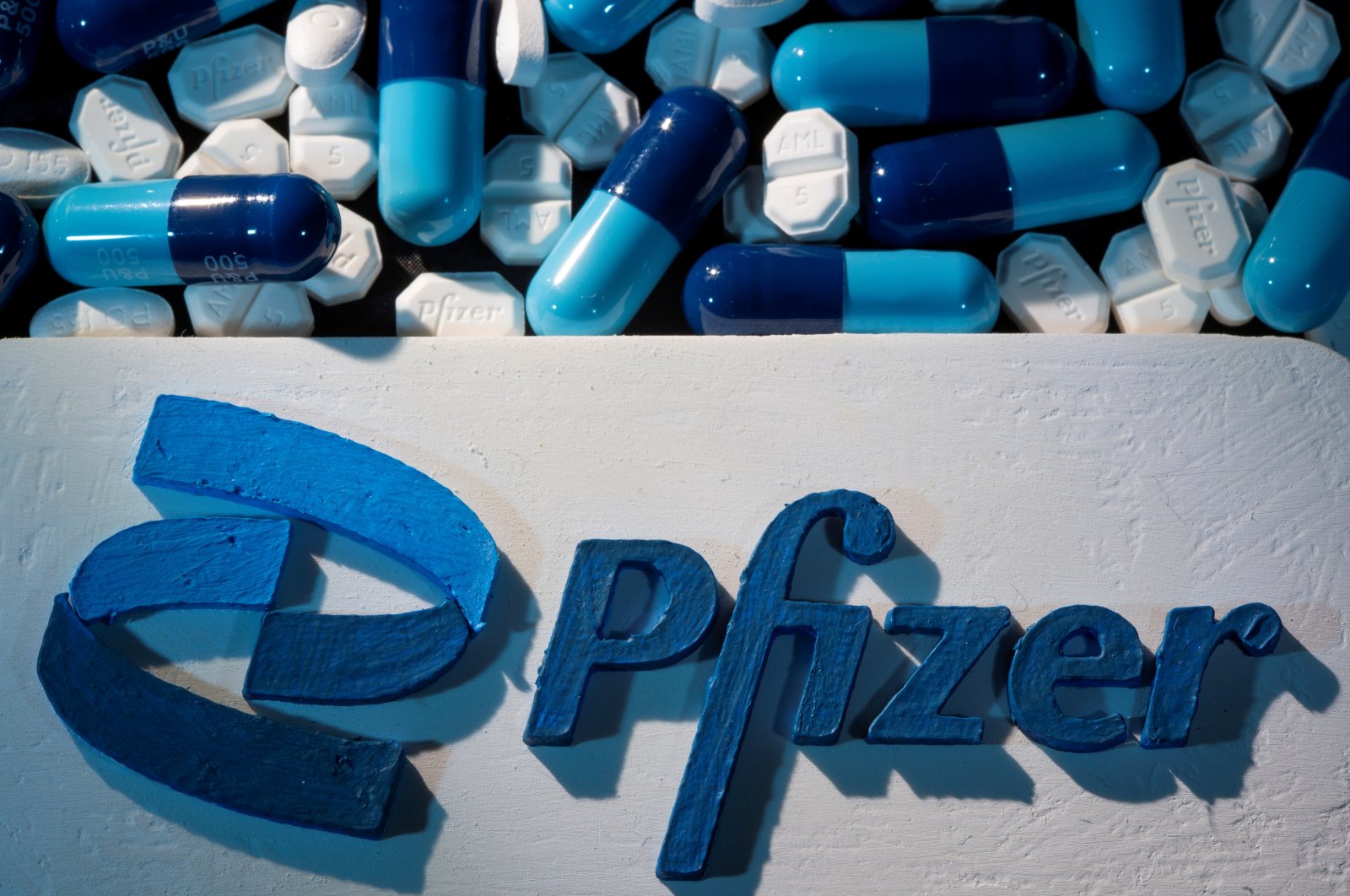 A 3D printed Pfizer logo is placed near medicines from the same manufacturer in this illustration taken Sept. 29, 2021. (Reuters Phoot)
by ASSOCIATED PRESS Nov 05, 2021 2:00 pm
RECOMMENDED

Pfizer Inc. said Friday that its experimental antiviral pill for COVID-19 cut rates of hospitalization and death by nearly 90% as the drugmaker joins the race to bring the first easy-to-use medication against the coronavirus to the U.S. market.

Currently, all COVID-19 treatments used in the U.S. require an IV or injection. Competitor Merck’s COVID-19 pill is already under review at the Food and Drug Administration (FDA) after showing strong initial results, and on Thursday the United Kingdom became the first country to OK it.

Pfizer said it will ask the FDA and international regulators to authorize its pill as soon as possible after independent experts recommended halting the company’s study based on the strength of its results. Once Pfizer applies, the FDA could make a decision within weeks or months.

Researchers worldwide have been racing to find a pill against COVID-19 that can be taken at home to ease symptoms, speed recovery and reduce the crushing burden on hospitals and doctors.

“We were hoping that we had something extraordinary, but it’s rare that you see great drugs come through with almost 90% efficacy and 100% protection for death,” said Dr. Mikael Dolsten, Pfizer’s chief scientific officer, in an interview.

Study participants were unvaccinated, with mild-to-moderate COVID-19, and were considered high risk for hospitalization due to health problems like obesity, diabetes or heart disease. Treatment began within three to five days of initial symptoms, and lasted for five days.

Pfizer reported few details on side effects but said rates of problems were similar between the groups at about 20%.

An independent group of medical experts monitoring the trial recommended stopping it early, standard procedure when interim results show such a clear benefit. The data have not yet been published for outside review, the normal process for vetting new medical research.

Top U.S. health officials continue to stress that vaccination will remain the best way to protect against infection. But with tens of millions of adults still unvaccinated – and many more globally – effective, easy-to-use treatments will be critical to curbing future waves of infections.

The FDA has set a public meeting later this month to review Merck’s pill, known as molnupiravir. The company reported in September that its drug cut rates of hospitalization and death by 50%. Experts warn against comparing preliminary results because of differences in studies.

Although Merck’s pill is further along in the U.S. regulatory process, Pfizer’s drug could benefit from a safety profile that is more familiar to regulators with fewer red flags. While pregnant women were excluded from the Merck trial due to a potential risk of birth defects, Pfizer’s drug did not have any similar restrictions. The Merck drug works by interfering with the coronavirus’ genetic code, a novel approach to disrupting the virus.

Pfizer’s drug is part of a decades-old family of antiviral drugs known as protease inhibitors, which revolutionized the treatment of HIV and hepatitis C. The drugs block a key enzyme that viruses need to multiply in the human body.

The drug, which has not yet been named, was first identified during the SARS outbreak originating in Asia during 2003. Last year, company researchers decided to revive the medication and study it for COVID-19, given the similarities between the two coronaviruses.

The U.S. has approved one other antiviral drug for COVID-19, remdesivir, and authorized three antibody therapies that help the immune system fight the virus. But they have to be given by IV or injection at hospitals or clinics, and limited supplies were strained by the last surge of the delta variant.