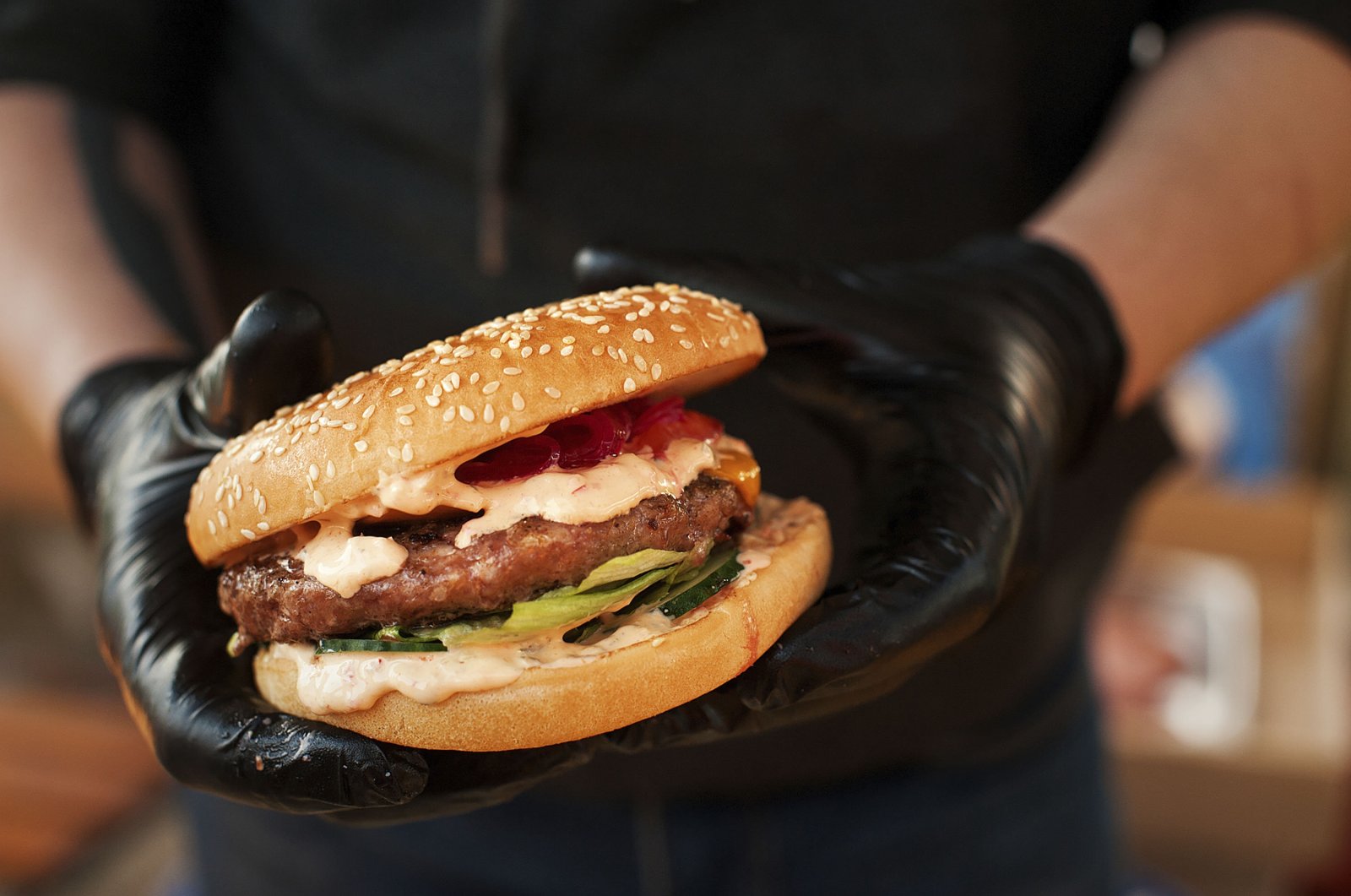 A photo showing a person wearing plastic gloves and holding a burger in hand. (Photo by Shutterstock)
by Daily Sabah Oct 29, 2021 2:21 pm
RECOMMENDED

A first-of-its-kind study published Wednesday revealed that potentially harmful chemicals linked with serious health problems including infertility and heart diseases were detected in cheeseburgers, chicken burritos and other popular foods purchased at fast-food restaurants in the United States.

According to a recent report by George Washington University, the researchers and their colleagues purchased fast-food items alongside three pairs of unused food handling gloves from popular outlets.

The report published Tuesday said: “Researchers found 10 of 11 potentially harmful chemicals in the samples, including phthalates, a group of chemicals that are used to make plastics soft and are known to disrupt the endocrine system. The research team also found other plasticizers, chemicals that are emerging as replacements to phthalates.”

Another study published in October by New York University had found approximately 100,000 deaths in older Americans annually may be caused by daily exposure to phthalates.

The lead author of the study and a postdoctoral scientist at the university, said in the report, “We found phthalates and other plasticizers are widespread in prepared foods available at U.S. fast-food chains, a finding that means many consumers are getting a side of potentially unhealthy chemicals along with their meal.” She added, “Stronger regulations are needed to help keep these harmful chemicals out of the food supply.”

The report noted the following in the results of the study:

The report went on to explain: “Phthalates and replacement plasticizers are chemicals used to make plastics soft and can migrate out of plastics into the food, which is ingested. Some sources of plastics include food handling gloves, industrial tubing, food conveyor belts and the outer packaging used to wrap fast food meals available in restaurants.”

“Previously, a university research team led by Ami Zota, a professor of environmental and occupational health, looked at fast-food consumption in a national survey and found people who reported eating more fast foods had higher levels of phthalates. No one has looked at the link between fast food and non-phthalate plasticizers, which are used in place of banned or restricted phthalates in food packaging and processing equipment,” the report said.

Previous research by Zota’s team suggests that people who eat food cooked at home have lower levels of these chemicals in their bodies, probably because home cooks do not use food handling gloves or plastic packaging. To avoid these industrial chemicals, consumers can switch to mostly home-cooked meals, which are often healthier than fast food, Edwards said in the report.

The report noted: “Both Edwards and Zota say their study suggests the need for greater scrutiny and regulation of chemicals used to make food. They point out that replacement plasticizers are increasingly used to replace banned or restricted phthalates yet the studies needed to show that they are safe, have yet to be done."

“The study also raises the concern that certain racial/minority groups may be disproportionately affected by these chemicals,” the report said.

“Disadvantaged neighborhoods often have plenty of fast food outlets, but limited access to healthier foods like fruits and vegetables,” Zota said in the report. “Additional research needs to be done to find out whether people living in such food deserts are at higher risk of exposure to these harmful chemicals,” it added.

The study, “Phthalate and Novel Plasticizer Concentrations in Food Items from U.S. Fast Food Chains: A Preliminary Analysis,” was published in the Journal of Exposure Science and Environmental Epidemiology.