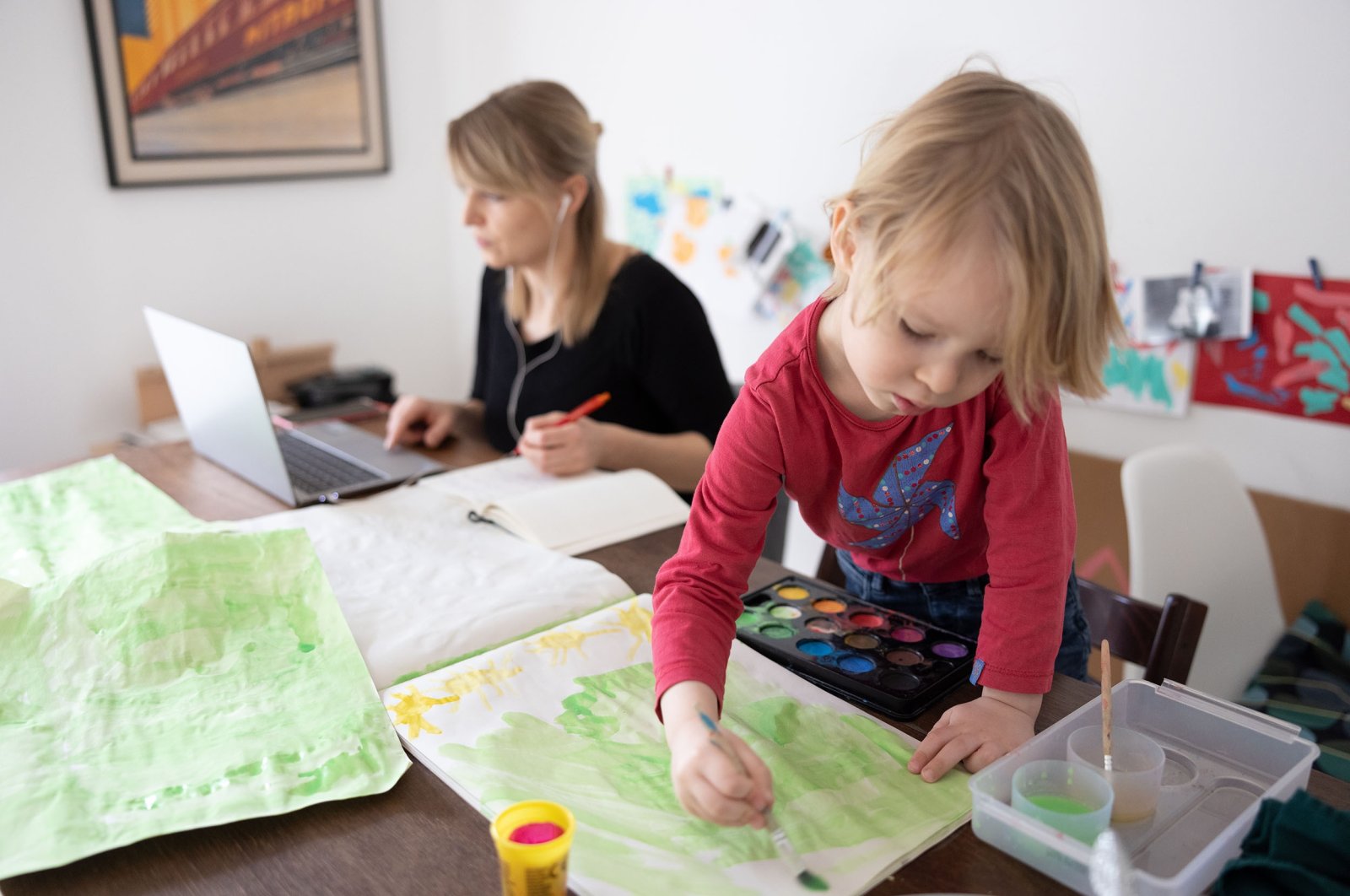 A woman works and attends a digital conference at home while her son paints beside her, during the second wave of COVID-19 pandemic in Zehlendorf district of Berlin, Germany, Feb. 18, 2021. (Getty Images)
by French Press Agency - AFP Aug 27, 2021 9:47 am
RECOMMENDED

Ever since the start of the global COVID-19 pandemic most people, and pupils, have been working from home, and there are significant benefits in this model in terms of controlling the spread of the virus. However, online classes cannot take the place of in-person lessons, especially in the case of education, so the best route for businesses and schools is to have two rotating groups, a French study showed Thursday.

Several research institutions including the CNRS and the University of Paris mapped real-world contact networks using data from a high school, a primary school and a business in France.

They then used the networks to simulate the spread of coronavirus from a single case, testing what method of partial teleworking would most efficiently mitigate an outbreak.

For all three settings, two groups rotating weekly work best to slow transmission of an infection, the study published in the journal PLOS Computational Biology concluded.

The second most effective method is to have two groups rotate daily, it found.

Alternating the presence of a whole population of students or workers on a weekly or daily basis, however, was found to be least effective for social cohesion.

Researchers used information on real-world interactions between individuals and simulated the spread of coronavirus using known information about the virus' behavior.

They accounted for the fact that COVID-19 can be contagious before symptoms appear and included random "super-spreader" events in their models.

In a baseline scenario – a primary school with normal attendance – there was a 27% chance that a positive case will lead to an outbreak, which is defined as one person infecting at least five others.

The weekly rotation model is also the most efficient at delaying an outbreak and at limiting the overall number of infections.

But these strategies only work if the amount of virus circulating in the local population remains limited.

If the average number of persons infected by a single case is more than 1.7, "then none of these strategies, except for the full-time telecommuting, suffices to prevent the onset of an outbreak," the study says.

But if the virus is spreading at a rate of 1.4 new cases for each infected person, "all four of these strategies are satisfactory and manage to curb the epidemic," the study shows.

An in-person return to school is planned for all students in France next week.

A system of weekly rotating groups applied to some middle- and high-schools across the country could return if cases start to rise again, officials have said.