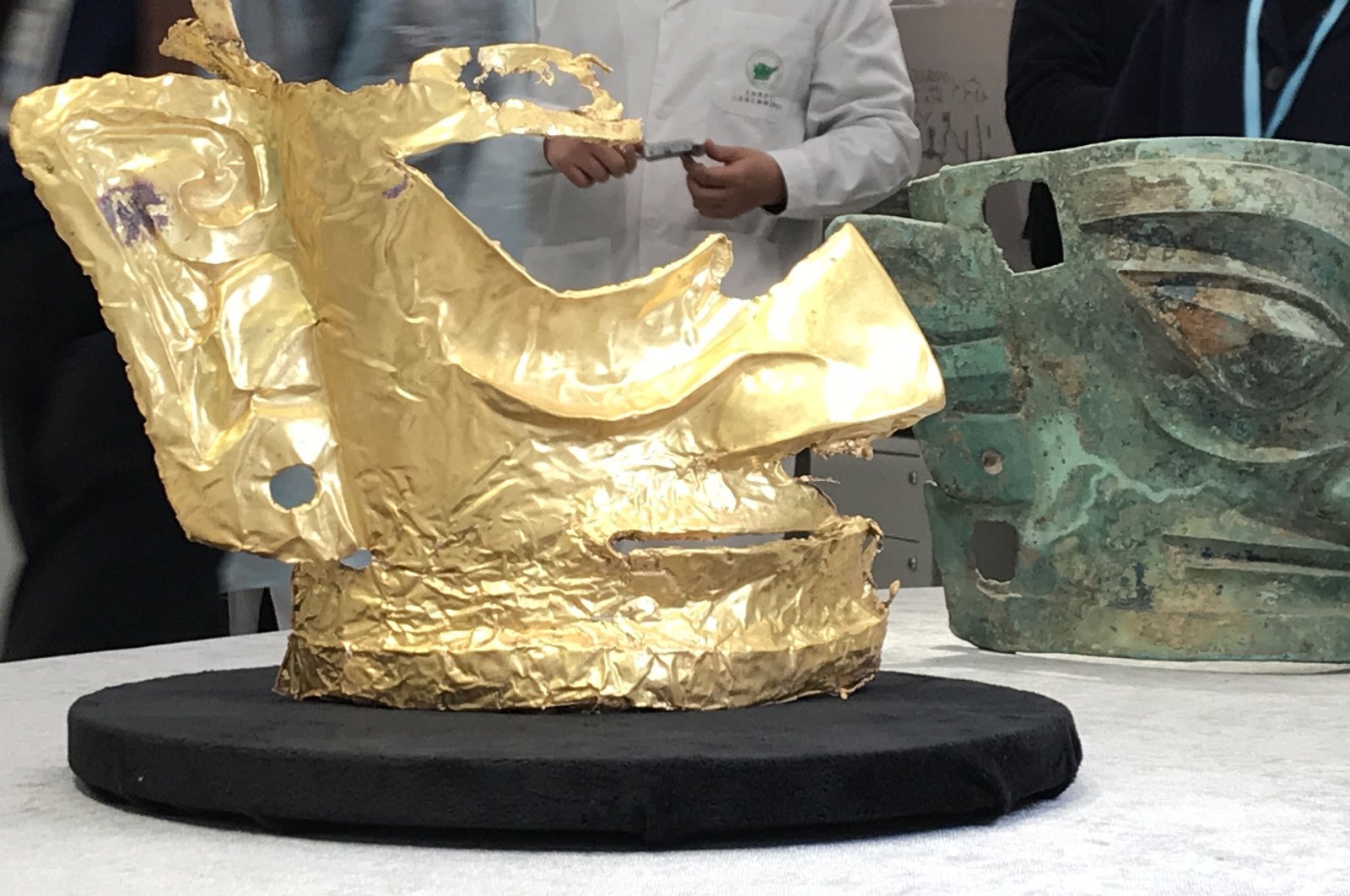 Chinese archaeologists have made major discoveries at the legendary Sanxingdui Ruins site in southwest China's Sichuan province that could help shed light on the cultural origins of the Chinese nation. Among those discovered are six new sacrificial pits and more than 500 items dating back about 3,000 years, with a golden face mask taking the spotlight.

Ranging from 3.5 to 19 square meters (37 to 204 square feet), the six sacrificial pits, which were discovered between November 2019 and May 2020, are rectangular in shape, according to the announcement of the National Cultural Heritage Administration (NCHA).

Among them, pits No.3, No.4, No.5 and No.6 have been excavated to the utensil layer so far, while pits No.7 and No.8 are being backfilled.

Together they form an area in which people of the ancient Shu civilization offered sacrifices to heaven, Earth and their ancestors, and prayed for prosperity and peace, according to Tang Fei, head of the excavation team at Sanxingdui and chief of the Sichuan Provincial Cultural Relics and Archaeology Research Institute.

The discoveries have shown the distinctiveness of the Shu civilization and the diversity of the Chinese civilization, said Ran Honglin, another researcher with the institute.

With an area of about three square meters, No.5 is the smallest sacrificial pit, but it's where the most gold pieces have been unearthed including a gold mask from the Bronze Age, according to archaeologists.

The ceremonial gold mask, which weighs around 280 grams (0.6 pounds), is estimated to be made from 84% gold, according to the NCHA.

Many gold leaves were also scattered on the bottom of the pit, and most of which are small and thin, with the extraction work very difficult, and careful. Based on the distribution, experts speculate that those gold leaves may be related to textiles.

The gold leaves that have been successfully extracted will be measured one by one, numbered, put into the sample box and sent to the Sanxingdui Cultural Relics Restoration Center for further inspection.

The staff will scan them with hyperspectral imaging technology. The technique allows the archaeologists to see the initial state of the gold article, which will help to provide a comparison for the repair and protection of the gold article in the future.

In addition, some of the gold items excavated previously in the pit have already completed the preliminary shape restoration work. The exquisite carving skills on the thin gold leaves of the ancient Shu civilization are sure to once again amaze the archaeology world.

Located in the city of Guanghan, some 40 kilometers (24.8 miles) from Sichuan's provincial capital Chengdu, the Sanxingdui Ruins site is regarded as one of the most important archaeological discoveries in the 20th century.

The excavation at Sanxingdui, which is on the UNESCO Tentative World Heritage List, has lasted for nearly 100 years since the first discovery in the late 1920s.

In 1986, archaeologists found two large-scale sacrificial pits dating back to the Shang Dynasty (1600-1046 B.C.). Thousands of rare treasures were discovered in the two pits.