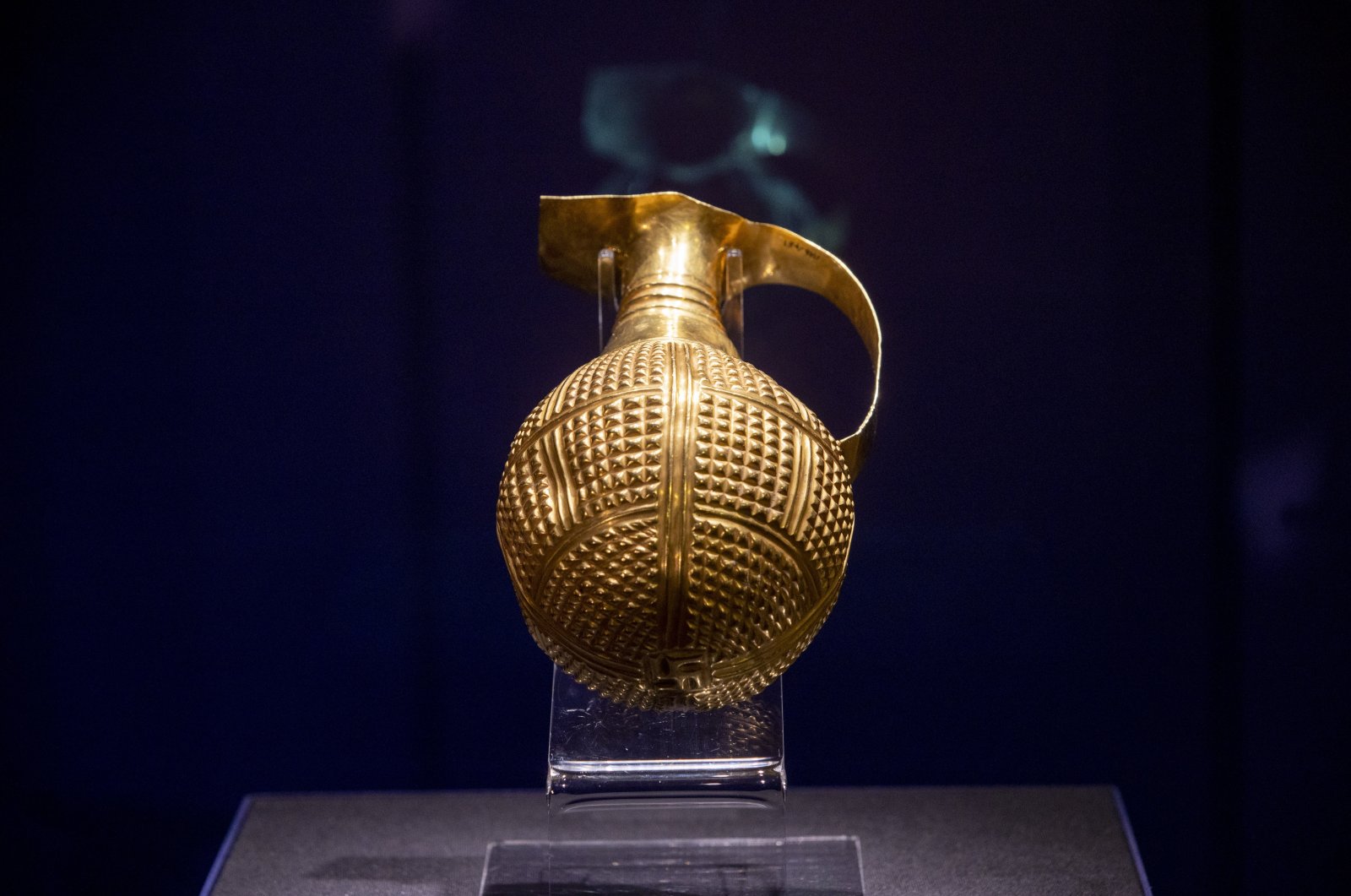 A photo showing the golden beak-spouted ewer on display in the Museum of Anatolian Civilization. (Photo by Anadolu Agency)
by Demirören News Agency Oct 26, 2021 5:06 pm
RECOMMENDED

Identified in a museum in London, an ancient golden beak-spouted ewer belonging to the Hattian people that lived in Anatolia in the third century B.C. has been returned to Turkey. Minister of Culture and Tourism Mehmet Nuri Ersoy said in a statement, “This cultural heritage returned to the land it belongs to.”

The identification came from the General Directorate of Museums and Cultural Heritage’s department of anti-smuggling. It was found that the ewer was purchased by art collector Arthur Gilbert from Los Angeles in 1989 to add to his collection of gold and silver artifacts and was loaned to the Victoria-Albert Museum in London. The Gilbert Art Foundation, founded by Arthur Gilbert, was contacted for the return of the artifact, which was found to have been illegally obtained from excavations and smuggled out of Anatolia.

Gilbert Art Foundation officials reported having no knowledge of illegal ties when the artifact was received.

In cooperation with the foundation, ministry experts were able to compare it with similar artifacts, confirmed that the piece was dated to the Hatti period and notified the foundation. The foundation shared the results of the chemical analysis of the metal components of the work with the ministry. It was determined that the beak-spouted ewer was closely related to other artifacts found in the archaeological excavations in Alacahöyük and Mahmatlar, and similar examples were found during the archaeological excavations of the Hatti settlement in Çorum and Amasya. Finally, the ewer, which is thought to have been used for drinking during holy ceremonies by distinguished rulers, was returned to its homeland.

A ceremony was held for the work of art that is now housed in the Museum of Anatolian Civilizations located in Ankara, Turkey. Speaking at the ceremony, Minister Ersoy said that Turkey is resolutely continuing its efforts for the return of cultural assets that have been illegally taken from their lands. Minister Ersoy noted that they had to struggle with biased decisions, meaningless discussions, and unrealistic and unscientific perspectives to secure the return of artifacts that were illegally taken abroad, but added, "Sometimes witnessing the existence of ethical approaches, such as in this case, is a driving force for us in tackling difficulties."

Providing additional information on the return process of the artifact, Minister Ersoy said: "Comparisons of the metal component data related to the artifact were made by the experts of Ankara Restoration and Conservation Regional Laboratory affiliated to our ministry. The results were also confirmed by mining expert Professor Ünsal Yalçın, an academician of Bochum University.”

“After our correspondence, we found the Museum of Anatolian Civilizations to be the right address for the exhibition and preservation of this piece, due to its magnificent Hatti collection,” said Minister Ersoy.

Also explaining that the ceremonial nature of the beak-spouted ewer can be understood from the craftsmanship of the work, he added, "This artifact, which was presumably placed on the ground as a grave gift, was taken out of its context by unidentified people."