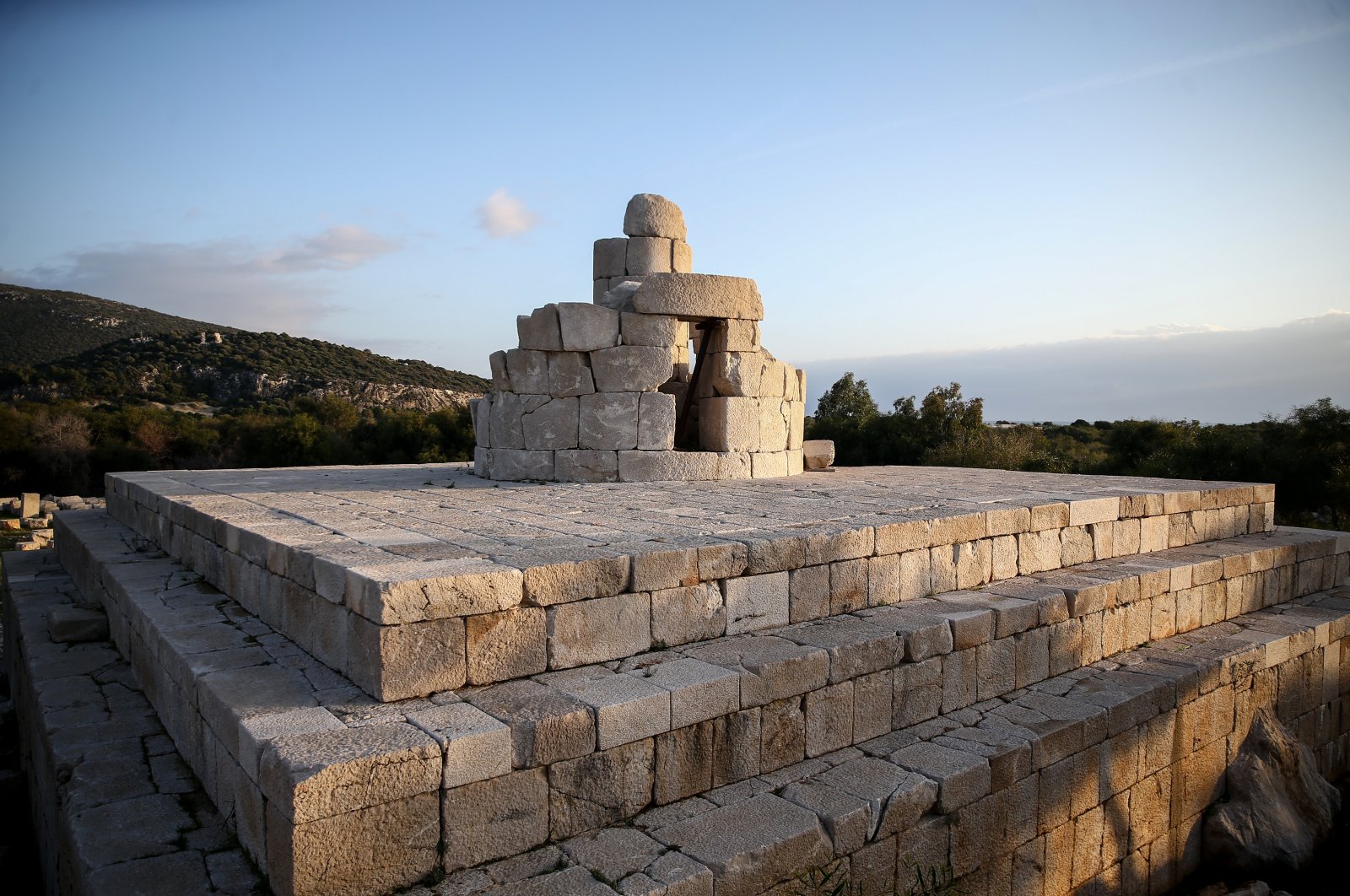 A hospital for stones has been established in the ruins of the Patara ancient city, located in the Kaş district of southern Turkey's Antalya province, in order to reerect the city's lighthouse, which was built as the prestige work of the Roman Emperor Nero, with its original stone material.

The restitution project prepared for the reconstruction of the lighthouse in Patara with its original stone materials has been finalized. During the archaeological excavations around the structure, the stones that are the original material of the lighthouse were unearthed. Stacked in the archaeological area, the stones are being examined by a team coordinated by professor Havva Işkan Işık, the head of the excavation committee, in the stone hospital built in the area.

The company that was contracted to restore the structure under the supervision of the scientific committee set up the building site in the area. In the stone hospital, the stones belonging to the lighthouse have been examined, arranged and cleaned to be ready to use for the revival of the structure.

Işık, who is also a faculty member at the Department of Archaeology, Faculty of Letters at Akdeniz University, told Anadolu Agency (AA) that Patara has a lighthouse which they regard as a “jewel.”

Stating that the lighthouse is one of the most exciting works for her in Patara, Işık said that there was a gold inscription on the structure, which was built by one of Rome's most famous emperors, Nero, in 54 A.D. According to Işık, the inscription bears Nero’s statements about the date of the construction of the lighthouse and which governors helped build it. The inscription also says: “I am Emperor Nero. I built this lighthouse for the safety of sailors.”

Işık confirmed that all the original stone materials used in the construction of the lighthouse have been unearthed and numbered during the excavation works. “The lighthouse in Patara is not the first lighthouse in the world, but it will be the only one to be revived with its original material," she said.

Işık said that the original stone materials belonging to the structure are being processed at the stone hospital in the area where the contracting company set up the worksite for them.

Indicating that stones are individually restored with meticulous work, Işık said: “The lighthouse will begin to rise above the stones. This is literally a hospital. Each of the original blocks to be returned to the structure will undergo individual laser scanning at this hospital and be modeled in 3-D form. These models will be printed in 3D again. So, we will have the opportunity to acquire all the original blocks of the lighthouse and check all our trials and installations in the restitution project we created earlier.”

According to Işık, after this scan, the carrying capacity of the stones will be measured with special measuring instruments and the amount of weight each can bear will be determined. “We will see whether a stone in the first meter can carry a load of 26 meters. Those with capillary cracks will be repaired and strengthened," she said.

"The stones will be reerected after many examinations and operations are performed on them. It is a restoration project that requires great responsibility. We are going to do all this work at the stone hospital,” Işık added.

Emphasizing that the stones in the lighthouse are in quite good and durable condition, Işık noted that, taking advantage of this, they will put the lighthouse back on its feet as soon as possible.