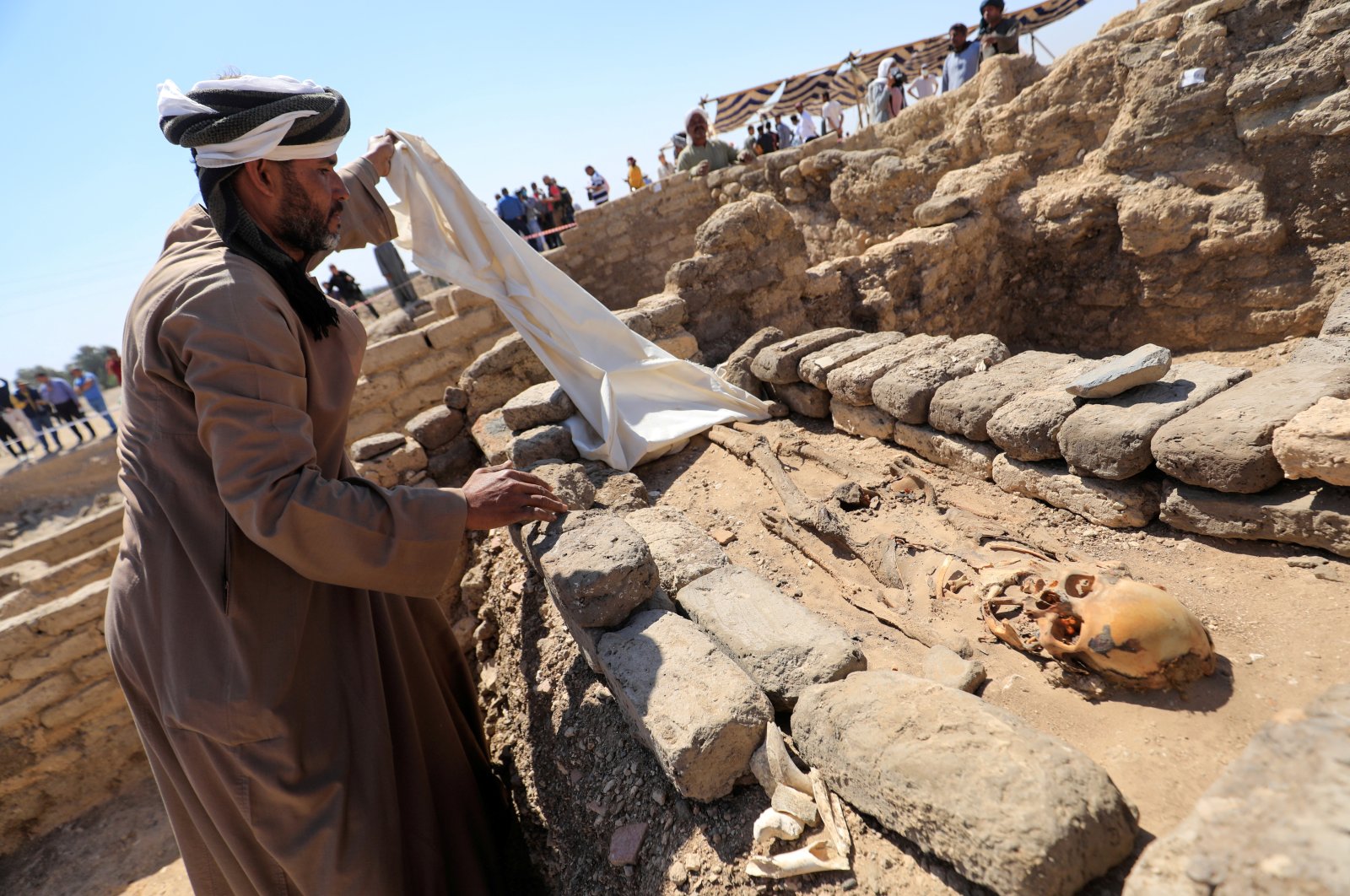 A man looks at skeletal human remains at the site of the 'Lost Golden City', which was recently discovered by archaeologists, in the West Bank of Luxor, upper Egypt, April 10, 2021. (Reuters Photo)
by French Press Agency - AFP Apr 10, 2021 1:05 pm
RECOMMENDED

A portion of the largest ancient city ever found in Egypt was unearthed near Luxor, officials said Saturday, as the city is thought to date back to a golden Pharaonic age 3,000 years ago.

Famed Egyptologist Zahi Hawass had announced earlier this week the discovery of the "lost golden city," saying the site was uncovered near Luxor, home of the legendary Valley of the Kings.

"We found one portion of the city only. But the city extends to the west and the north," Hawass told AFP Saturday ahead of a press conference in the archaeologically rich area.

Betsy Bryan, professor of Egyptian art and archaeology at Johns Hopkins University, had said the find was the "second most important archeological discovery since the tomb of Tutankhamun" nearly a century ago, according to the excavation team's statement Thursday.

Items of jewelry have been unearthed, along with colored pottery vessels, scarab beetle amulets and mud bricks bearing seals of Amenhotep III.

The team began excavations in September between the temples of Ramses III and Amenhotep III near Luxor, some 500 kilometers (300 miles) south of Cairo.

Amenhotep III inherited an empire that stretched from the Euphrates River in modern Iraq and Syria to Sudan and died around 1354 BC, ancient historians say.

He ruled for nearly four decades, a reign known for its opulence and the grandeur of its monuments, including the Colossi of Memnon – two massive stone statues near Luxor that represent him and his wife.

"It's not only a city – we can see ... economic activity, workshops and ovens," Mostafa Waziri, head of the country's Supreme Council of Antiquities, said Saturday.

Since the announcement, some scholars have disputed that Hawass and his team have succeeded where others had failed by locating the city.

Egyptologist Tarek Farag posted Friday on Facebook that the area was first excavated more than a century ago by a team from New York's Metropolitan Museum.

But Waziri dismissed these concerns, saying previous digs had taken place further afield to the south of the site.

Several other ancient discoveries have been made in Egypt in recent times, particularly at the UNESCO World Heritage site of Saqqara with nearly a hundred sarcophagi and statues discovered in mid-November, some of them thought to rewrite the ancient history of the site.