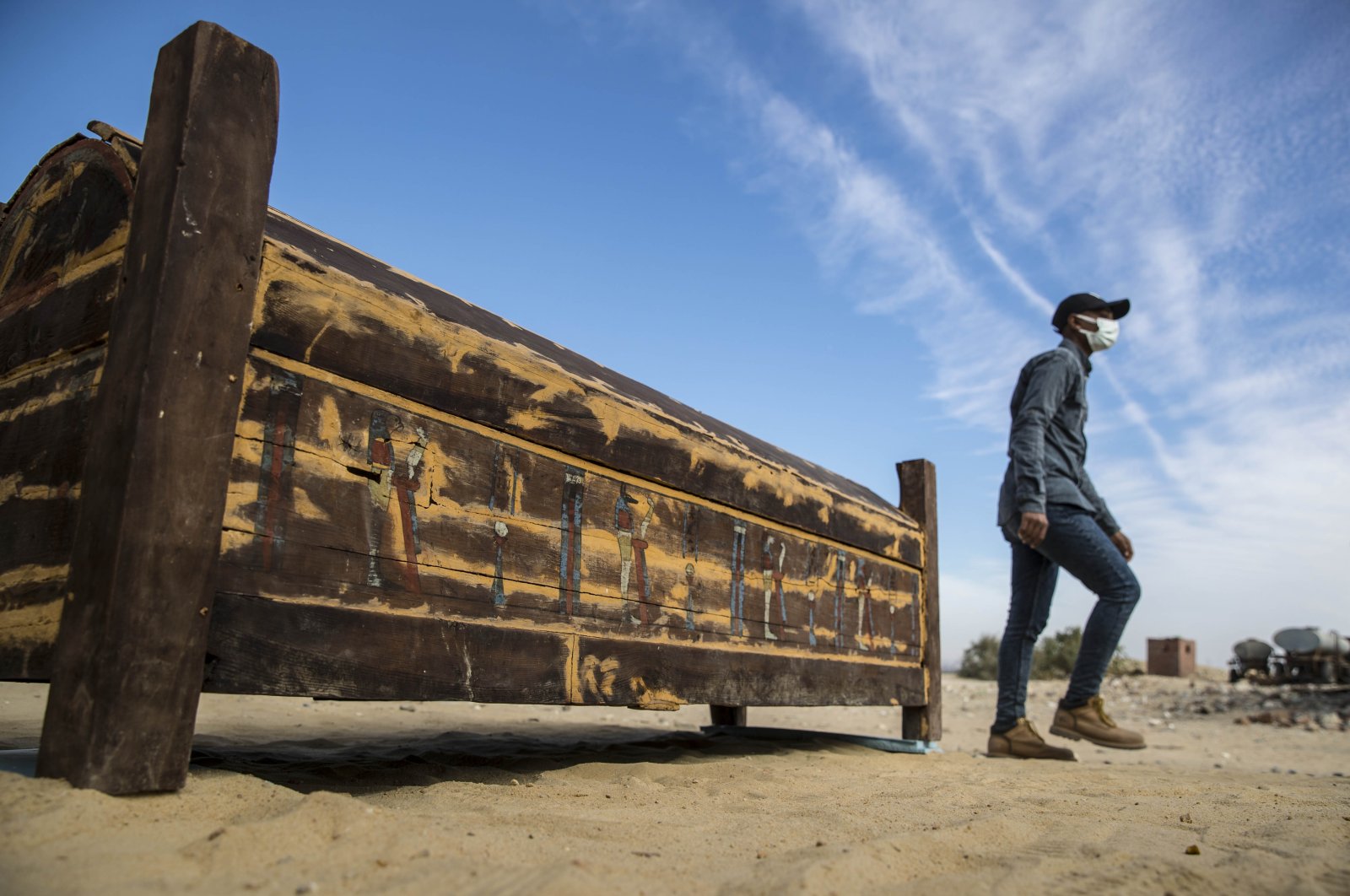 Egypt unveiled on Sunday ancient treasures found at the Saqqara archaeological site south of Cairo, including sarcophagi over 3,000 years old, a discovery that "rewrites history," according to famed Egyptologist Zahi Hawass.

Saqqara is a vast necropolis of the ancient Egyptian capital of Memphis, a UNESCO World Heritage Site home to more than a dozen pyramids, ancient monasteries and animal burial sites.

A team headed by Hawass made the finds near the pyramid of King Teti, the first pharaoh of the Sixth Dynasty of the Old Kingdom. More than 50 wooden sarcophagi dating to the New Kingdom, which ruled between the 16th century BC and 11th century BC, were found in a burial shaft.

"This discovery re-writes the history of Saqqara and more specifically the history of the New Kingdom, which began 3,000 years ago," Hawass told Agence France-Presse (AFP) on Sunday. He said his team had discovered a total of 22 shafts and added "one of the coffins belonged to a soldier. We found the axe that he used to fight."

A stone sarcophagus was also found, as well as "a papyrus around five meters long containing the 17th chapter of the book of the dead... masks, wooden boats, games the ancient Egyptians used to play."

The games, known as Senet and Game 20, he said, were placed in the tombs so the dead could play on in the afterlife. Those who win at Senet "will go to the other world, to the field of Aaru – this is the paradise of ancient Egypt," said Hawass.

"It is a rare and new discovery because most of the artefacts we found are dated back to the New Kingdom, whereas in Saqqara, it's usually more around 500 BC," Hawass pointed out.

Objects including human skulls and bones were displayed to the media on Sunday, while excavations of the site are ongoing. The artifacts unearthed by the team so far represent only 30% of what is expected, Hawass said, adding that 70% still remains buried under the sands of Saqqara.

Egypt's tourism and antiquities ministry had announced on Saturday "major discoveries" at Saqqara, where there has been a flurry of excavations in recent years. The ministry said the team had also discovered the "funerary temple of Queen Nearit, the wife of King Teti, which had already been partially discovered in recent years."

Three warehouses made of bricks were also found on the site where ancient people used to store ritual offerings to the deities.

The Saqqara site is also home to the step pyramid of Djoser, one of the earliest built in ancient Egypt. Later this year, and after several delays, authorities hope to inaugurate a new museum – the Grand Egyptian Museum – at the Giza plateau, home to the famed Giza pyramids.

Egypt hopes archaeological discoveries will spur tourism, a sector that has suffered multiple shocks, from a 2011 uprising to today's coronavirus pandemic.