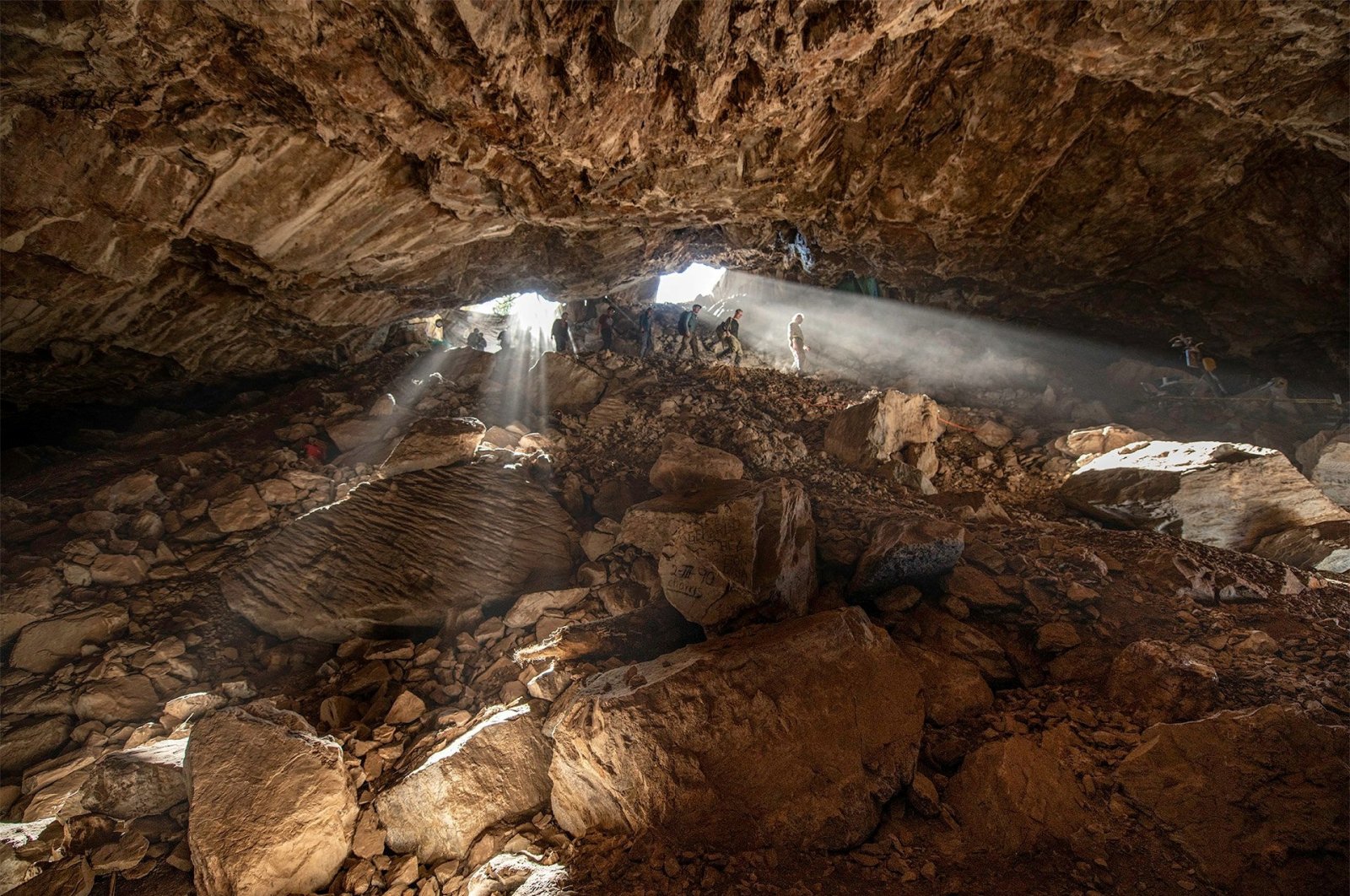 Researchers entering at a cave in Zacatecas in central Mexico, which contained stone tools and other evidence of the presence of prehistoric human populations, are seen in this image released on July 22, 2020. (Devlin A. Gandy/Handout via Reuters)
by French Press Agency - AFP Jul 22, 2020 8:06 pm
RECOMMENDED

Tools excavated from a cave in central Mexico are strong evidence that humans were living in North America at least 30,000 years ago, some 15,000 years earlier than previously thought, scientists said Wednesday.

Artifacts, including 1,900 stone tools, showed human occupation of the high-altitude Chiquihuite Cave over a roughly 20,000 year period, they reported in two studies, published in Nature.

"Our results provide new evidence for the antiquity of humans in the Americas," Ciprian Ardelean, an archeologist at the Universidad Autonoma de Zacatecas and lead author of one of the studies, told French Press Agency (AFP).

"There are only a few artifacts and a couple of dates from that range," he said, referring radiocarbon dating results putting the oldest samples at 33,000 to 31,000 years ago.

"However, the presence is there."

No traces of human bones or DNA were found at the site.

"It is likely that humans used this site on a relatively constant basis, perhaps in recurrent seasonal episodes part of larger migratory cycles," the study concluded.

The stone tools – unique in the Americas – revealed a "mature technology" which the authors speculate was brought in from elsewhere.

The saga of how and when Homo sapiens arrived in the Americas – the last major landmass to be populated by our species – is fiercely debated among experts and the new findings will likely be contested.

"That happens every time that anybody finds sites older than 16,000 years – the first reaction is denial or hard acceptance," said Ardelean, who first excavated the cave in 2012 but did not discover the oldest items until 2017.

Until recently, the widely accepted storyline was that the first humans to set foot in the Americas crossed a land bridge from present-day Russia to Alaska some 13,500 years ago and moved south through a corridor between two massive ice sheets.

But the so-called Clovis-first model has fallen apart over the last two decades with the discovery of several ancient human settlements dating back two or three thousand years before earlier.

Moreover, the tool and weapon remnants at these sites were not the same, showing distinct origins.

"Clearly, people were in the Americas long before the development of Clovis technology in North America," said Ruth Gruhn, an anthropology professor emerita at the University of Alberta, in commenting on the new findings.

In a second study, Lorena Becerra-Valdivia and Thomas Higham, researchers at the University of Oxford's Radiocarbon Accelerator Unit, used radiocarbon – backed up by another technique based on luminescence – to date samples from 42 sites across North America.

Using a statistical model, they showed widespread human presence "before, during and immediately after the Last Glacial Maximum" (LGM), which lasted from 27,000 to 19,000 years ago.

The timing of this deep chill is crucial because it is widely agreed that humans migrating from Asia could not have penetrated the massive ice sheets that covered much of the continent during this period.

"So if humans were here DURING the Last Glacial Maximum, that's because they had already arrived BEFORE it," Ardelean noted in an email.

Human populations scattered across the continent during an earlier period also coincide with the disappearance of once-abundant megafauna, including mammoths and extinct species of camels and horses.

"Our analysis suggests that the widespread expansion of humans through North America was a key factor in the extinction of large terrestrial mammals," the second study concluded.

Many key questions remain unanswered, including whether the first of our species to wander across the frozen tundra of Beringia made their way south via an interior route or – as recent research suggests – by moving along the coast, either on foot or in boats of some kind.

It is also a mystery as to "why no archaeological site of equivalent age to Chiquihuite Cave has been recognized in the continental United States," said Gruhn.

"With a Bering Straits entry point, the earliest people expanding south must have passed through that area."