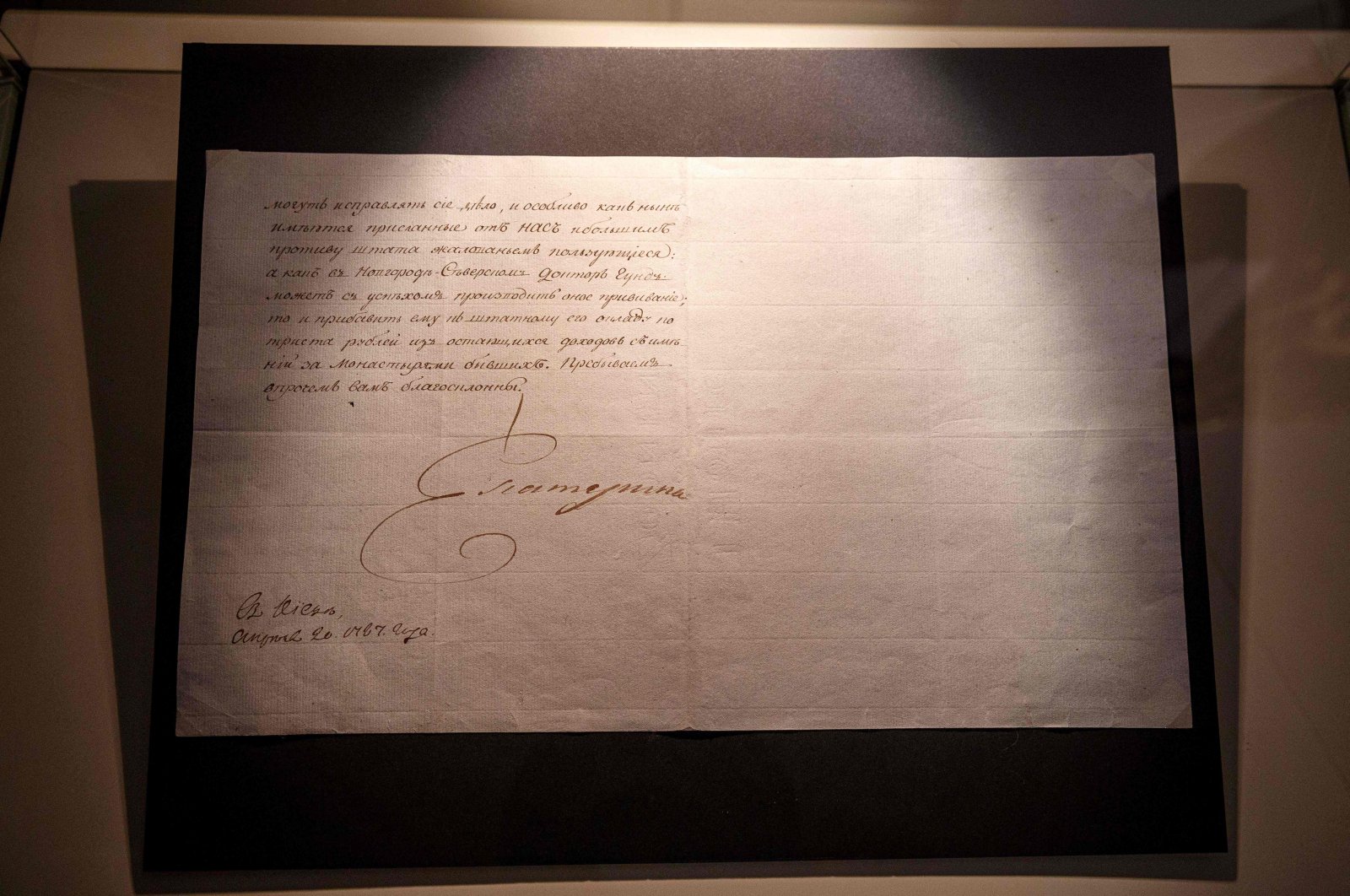 A rare letter written by Russian Empress Catherine the Great urging her subjects to get vaccinated against smallpox has been unveiled in Moscow, as Russia's current leadership struggles with its own vaccination drive more than two centuries later.

In the letter, dated April 20, 1787 and addressed to a count, the German-born ruler who expanded Russia's territory provides detailed instructions to authorities in present-day Ukraine on how to organize an effective inoculation campaign.

Auction house MacDougall's, which specializes in Russian art, put the letter and a portrait of Catherine on public display in Moscow on Friday, before the pieces go on sale in London.

The document and portrait are estimated to have a joint worth of up to 1.2 million pounds ($1.6 million).

Held until now in an anonymous private collection, they will be shown at a Moscow gallery until Nov. 30 and will go up for auction in London on Dec. 1.

"One of the most important (tasks) should be the introduction of inoculation against smallpox, which, as we know, causes great harm, especially among ordinary people," Catherine wrote to Count Pyotr Rumyantsev, reportedly on a trip to Crimea.

"Such inoculation should be common everywhere," she wrote in neat Cyrillic, signing "Catherine" in large script.

She goes on to provide details on how to make vaccinations widely available, including by setting up temporary accommodation in monasteries for those who fall ill after being jabbed.

The Empress was the first person in Russia to be vaccinated against smallpox.

"In today's conditions, we should be very proud of Catherine," the auction house's co-director and Russian art expert Yekaterina MacDougall told reporters during a press viewing on Thursday.

While President Vladimir Putin says he was vaccinated with Russia's home-grown Sputnik V vaccine, he took months into the pandemic to do so – and some have criticized him for not doing so on camera.

'Barbarism' not to get jab

The Empress had organized an "unreal" propaganda campaign to encourage her subjects to be jabbed against smallpox, which was decimating populations across Europe at the time.

But, "as a very intelligent woman," MacDougall said Catherine stopped short of mandating vaccinations. "She knew that the Russian people would rebel against this."

During the COVID-19 pandemic, many Russians have also rebelled against Kremlin instructions, refusing to vaccinate themselves against the virus.

Despite repeated pleas from Putin, only 40% of Russians are fully vaccinated.

Catherine's letter is "unique, especially given this situation we are all in," historian Oleg Khromov told reporters via video link, adding that it was a "miracle" that it had survived.

Catherine, scared of dying of smallpox like many around her, had a doctor come from England to give her the smallpox vaccine.

Khromov said doctors used a sample from a child to inject Catherine with the disease. The youngster was later rewarded with a title.

She was then sick for some time and when she recovered, imperial authorities put out a decree saying the Empress was feeling well and urged others to follow her.

But Khromov said that despite her efforts to convince Russians to get vaccinated, "people were scared, it was new and unusual."

When France's Louis XV died of smallpox in 1774, Catherine reportedly said it was "barbarism" to die of the disease in the enlightened 18th century.

"I very much hope that one day, maybe in the near future, we can say: 'What barbarism to die of COVID in the 21st century,'" Yekaterina MacDougall said.

Catherine is Russia's longest-ruling female leader, occupying the imperial throne between 1762 and 1796.