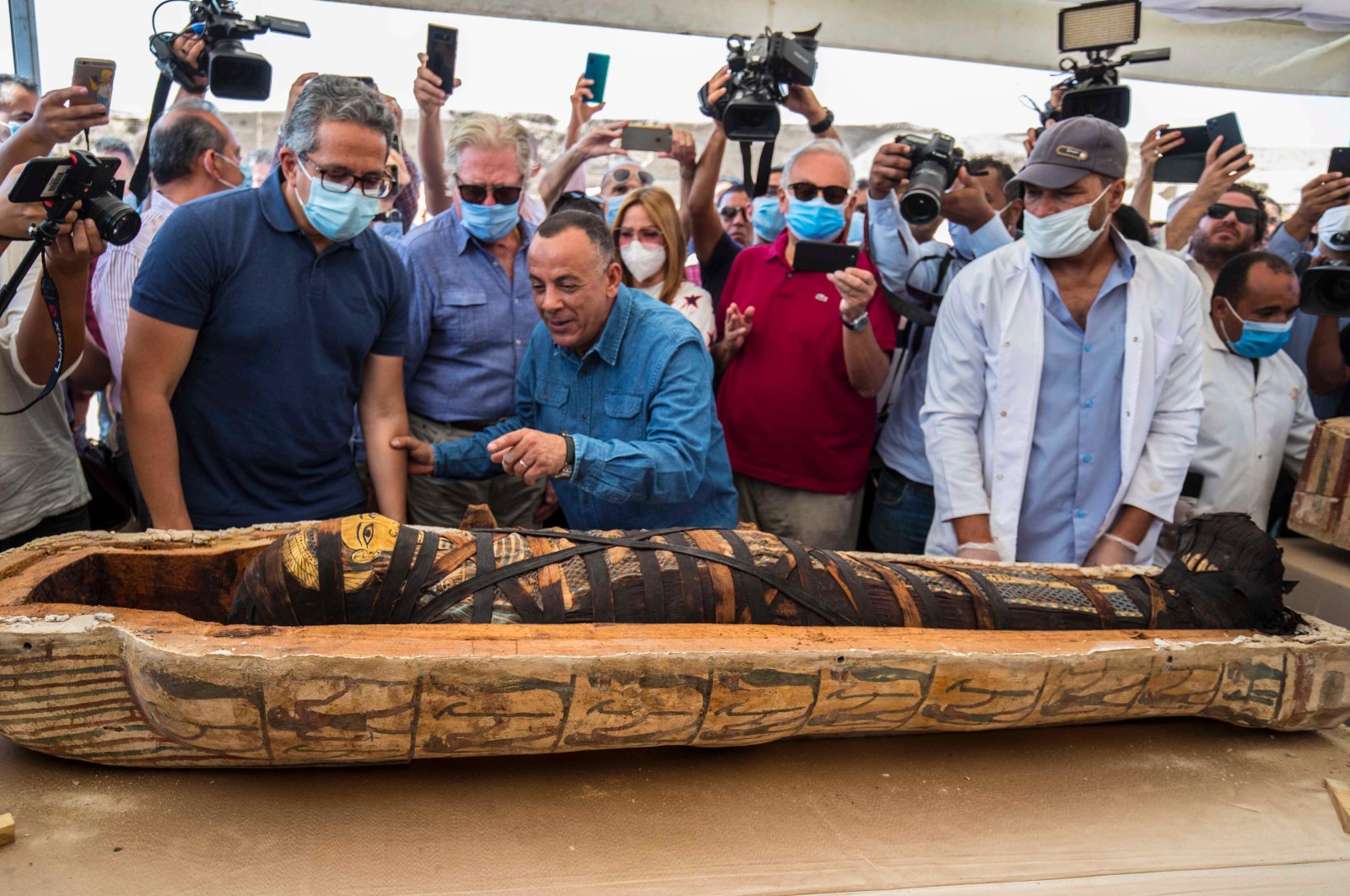 A picture taken on October 3, 2020 shows Egyptian Minister of Tourism and Antiquities Khaled Al-Anani (L), and Mustafa Waziri (R), Secretary General of the Supreme Council of Antiquities, unveil the mummy inside a sarcophagus excavated by the Egyptian archaeological mission working at the Saqqara necropolis, (AFP Photo)
by French Press Agency - AFP
Oct 03, 2020 4:50 pm

Archaeologists in Egypt said Saturday they had found 59 well-preserved and sealed wooden coffins over recent weeks that were buried more than 2,500 years ago.

Opening one of the ornately decorated sarcophagi before assembled media, the team revealed mummified remains wrapped in burial cloth that bore hieroglyphic inscriptions in bright colors.

The dramatic find was unearthed south of Cairo in the sprawling burial ground of Saqqara, the necropolis of the ancient Egyptian capital of Memphis, a UNESCO World Heritage site.

"We are very happy about this discovery," said Mostafa Waziri, secretary-general of the Supreme Council of Antiquities.

Since the find of the first 13 coffins was announced almost three weeks ago, more have been discovered in shafts at depths of up to 12 meters (40 feet).

An unknown number of additional coffins may still lie buried there, the tourism and antiquities minister, Khaled al-Anani, said at the site, near the 4,700-year-old pyramid of Djoser.

"So today is not the end of the discovery, I consider it the beginning of the big discovery," he said.

The coffins, sealed more than 2,500 years ago, date back to the Late Period of ancient Egypt, from about the sixth or seventh century B.C., the minister added.

Excavations in Saqqara have in recent years unearthed troves of artifacts as well as mummified snakes, birds, scarab beetles and other animals.

The discovery of the coffins is the first major announcement since the outbreak of COVID-19 in Egypt, which led to the closure of museums and archaeological sites for around three months from late March.

Anani said all the coffins will be taken to the soon-to-be-opened Grand Egyptian Museum (GEM) at the Giza plateau.

Egypt hopes a flurry of archaeological finds in recent years and the GEM will boost its vital tourism sector, which has suffered multiple shocks since the 2011 Arab Spring uprisings and most recently, the pandemic.