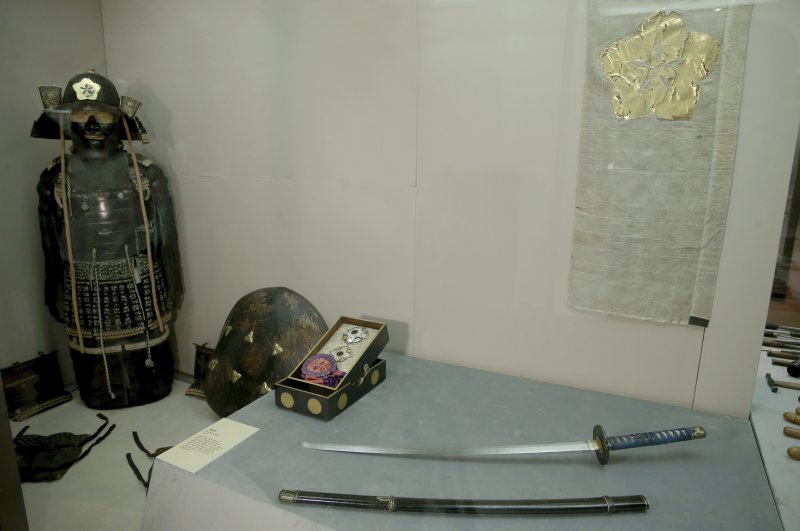 A suit of exquisite Japanese body armor and a number of other items, that are said to have been presented to Sultan Abdülhamid II by Japanese Emperor Meiji, are on display for the very first time at the Palace Collections Museum, in Istanbul’s Beşiktaş district.

The meeting between the two lofty heads of state, which was considered at the time to mark a turning point in Ottoman-Japanese relations, was held in Istanbul in 1887. Prince Komatsu, the nephew of Emperor Meiji, and his wife visited the sultan at Yıldız Palace as part of their travels across Europe. Emperor Meiji is reported to have been very pleased about the unofficial visit, in which the Japanese delegation was presented with Ottoman medals of various rank, returning the honor by sending Abdülhamid II a suit of armor named “The Supreme Order of the Chrysanthemum,” which is considered the greatest order of Japan. The backplates of the outfit are emblazoned with the phrases, “The flag brings victory to the army” and “The flag increases the glory of the army” on its back.

This Japanese armor is being exhibited for the first time in the Palace Collections Museum alongside a small model of a Japanese temple included as part of the gift. The body armor, which has a high symbolic value, bears all the delicacies of traditional Japanese art. However, it is not clear whether this armor was actually presented by Emperor Meiji. A brief Google search shows that Japanese businessperson Torajiro Yamada, a descendant of the Japanese emperors, was the one who actually presented the item to the Ottoman Sultan. This uncertainty has arisen most probably due to the later plunder of Yıldız Palace.

After Sultan Abdülhamid II was dethroned, Yıldız Palace, the administrative center of the state and the official residence of the monarch, was looted for more than 30 years. Collections of objects sent by the foreign state heads to the sultan or collected by the sultan himself were plundered, while most of the furniture was sent to other places. In the later periods, some of the plundered items were granted to museums by then holders. The body armor is highly likely to be one such item, which creates more than one estimation about its coming story to Turkish lands.

Alongside the eastern gifts presented as part of the Palace Collections Museum exhibit, sits an alluring model of a Japanese temple. The artifact, identical to the form of a 19th century Japanese temple, was presented to Sultan Abdülhamid II as a gift for the 25th anniversary of his enthronement.

Güller Karahüseyin, director of the museum, presented various information about the artifacts, saying that they were actually being stored in Topkapı Palace. She mentioned that they decided to offer visitors a glimpse at the Beşiktaş National Palaces Collections Museum.

According to Karahüseyin, the body armor dates back to the 1600s and belongs to the legendary Samurai warriors.

“This armor includes a shield, a sword and a flag and is said to have been used in combat. There is also a dent on it that must have occurred during a battle," Karahüseyin said. This body armor was brought to the Ottoman Empire and presented to Sultan Abdülhamid II in 1892.

Another gift is the Chrysanthemum Order. Upon the welcoming of the Japanese emperor's nephew and his wife during their unofficial visit to Sultan Abdülhamid II, the emperor sent this insignia accompanied by a letter as a token of his satisfaction with this visit. Furthermore, the museum has the model of a Japanese shrine gifted to Sultan Abdülhamid II to celebrate the 25th year of his reign. It has human figures of religious characters and embodies the fine craftsmanship of the Far East, Karahüseyin said.

The artifacts are open to visitors every day from 9 a.m. to 5 p.m. with the exception of Monday.