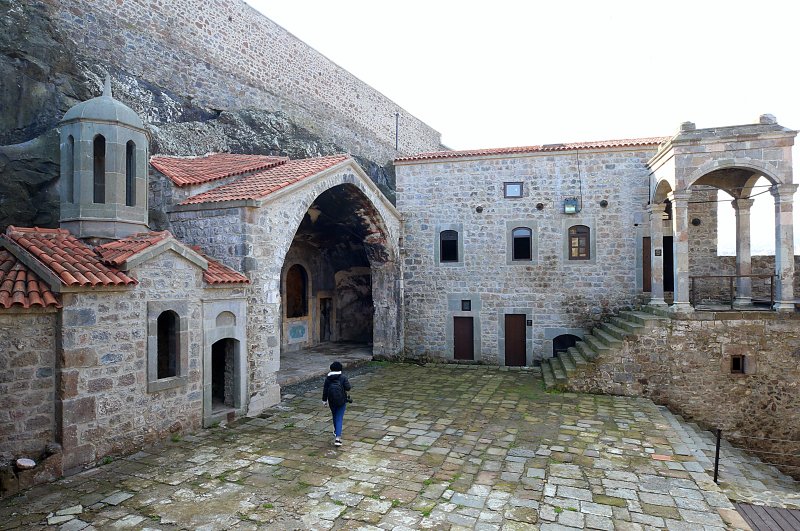 The restoration and relief work on the Panagia Theoskepastos Monastery, also known as the Kızlar Monastery, located in the Ortahisar district of Turkey's Black Sea province of Trabzon, has been completed. The restoration will enhance the already flourishing cultural and artistic life in the city with its living museums, performance events and art galleries.

The monastery complex, built on two terraces, is located on a high point of Trabzon in the Boztepe quarter, surrounded by a high guard wall and presents some views of the city. The monastery, estimated to have been founded during the reign of Byzantine Emperor Alexios III, has been repaired several times and received its last major update in the 19th century.

Notable for its proximity to the city center, the monastery consists of a rock church with holy water in the south and a chapel and several cells at its entrance. The rock church contains inscriptions and the portraits of Alexios III's wife Theodora and his mother Eirene.

The Ministry of Culture and Tourism completed extensive restoration and relief work at the end of last year, bringing the historic fabric of the monastery to the fore. The Trabzon Metropolitan Municipality prepared a project and carried out various studies to highlight the monastery and attract more interest from domestic and foreign tourists.

Trabzon Metropolitan Mayor Murat Zorluoğlu told Anadolu Agency (AA) that the Panagia Theoskepastos Monastery is an important tourism destination in the city. Zorluoğlu stated that the ownership of the monastery was transferred to the Trabzon Metropolitan Municipality in December 2019. The municipality plans to open the monastery in the new tourism season.

“We plan to build a gallery and art center and offer the third and fourth floors of the four-story complex, used by our Metropolitan Municipality, as a guest house to artists and art lovers. In this context, we have started the construction works. We plan to build a modern cafeteria in the monastery to meet the social needs of our visitors. The night lighting in the monastery has been completed and relevant departments of the municipality are working on the solution of the parking lot problem,” he said.

Underlining that the monastery will come to the fore in all aspects of tourism, Zorluoğlu continued: “The Panagia Theoskepastos Monastery, one of the most distinguished places of our city, will contribute to tourism as a cultural and art center in every field of art, from music to theater, from painting to literature, with its new face. In this context, we have accelerated our work before the new tourism season.”