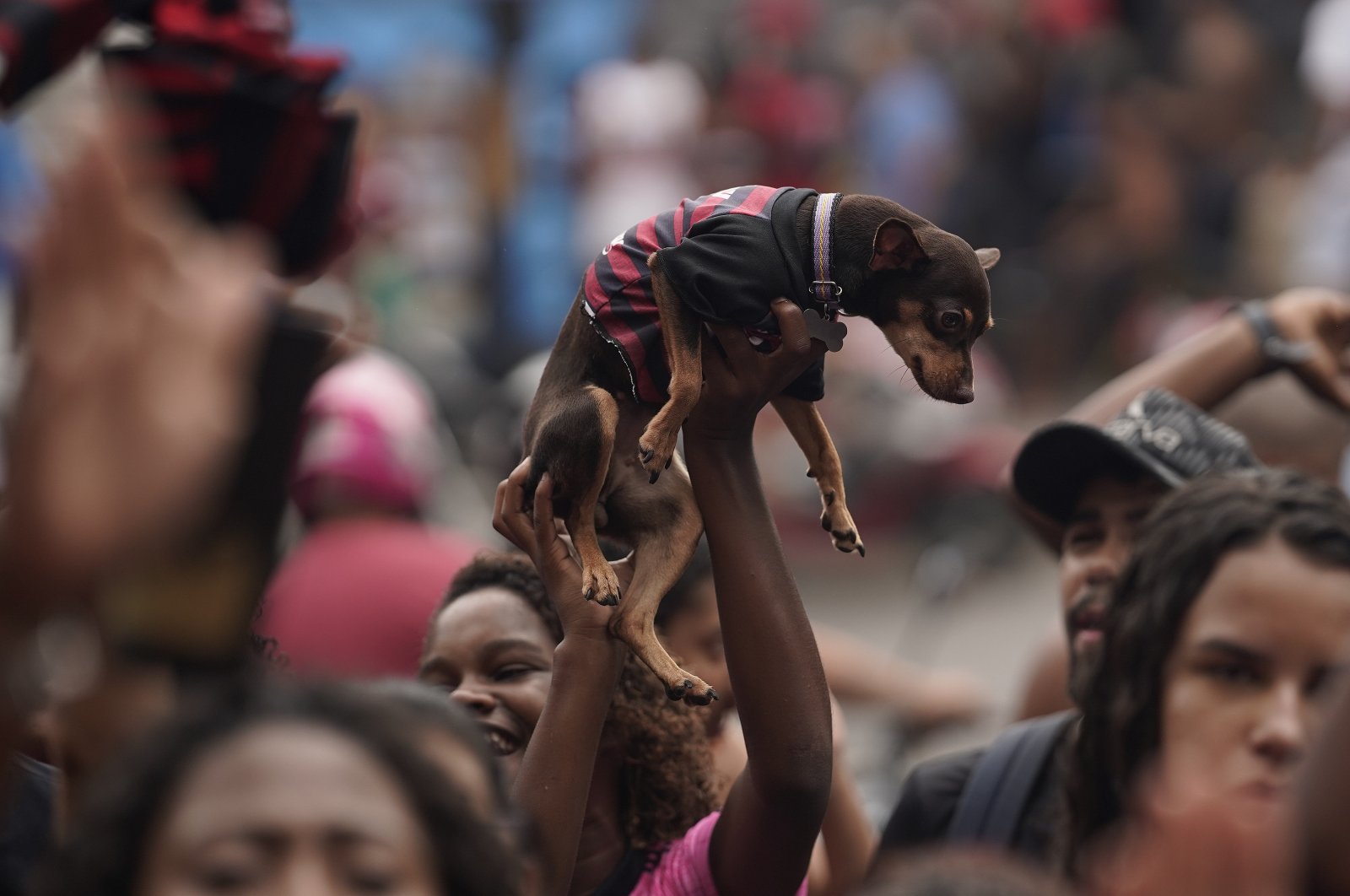 A fan of Brazil's Flamengo soccer team holds up her dog, wearing the colors of her team, after England's Liverpool scored a goal against Flamengo, during a live broadcast of the FIFA Club World Cup final soccer match, at the Rocinha slum in Rio de Janeiro, Brazil, Saturday, Dec. 21, 2019. (AP Photo)
by French Press Agency - AFP
Oct 29, 2020 9:16 pm

Much of the diversity seen in modern dog populations was already present around the time the last Ice Age had ended 11,000 years ago, a global study of ancient DNA revealed Thursday.

The paper, published in Science, showed how our canine companions spread across the world with their masters, but also found intriguing periods when our shared history was decoupled.

A research team led by the Francis Crick Institute sequenced the genomes of 27 dogs, some of which lived nearly 11,000 years ago, across Europe, the Near East and Siberia.

They found that by this time, well before the domestication of any other animal, there were already at least five different types of dogs with distinct genetic ancestries.

Pontus Skoglund of Crick's Ancient Genomics laboratory, the paper's senior author, said: "Some of the variations you see between dogs walking down the street today originated in the Ice Age.

"By the end of this period, dogs were already widespread across the northern hemisphere."

He added this implied that the diversity arose far earlier, "way back in time, during the hunter-gatherer Stone Age, the Paleolithic, way before agriculture."

When and where dogs first diverged from wolves is a contentious matter – analyses of genetic data indicate a window of roughly 25,000-40,000 years ago.

The new paper doesn't enter this vexed debate but does support the idea that, unlike other animals such as pigs which appear to have been domesticated in multiple locations over time, there is a "single origin" from wolves to dogs.

The scientists found that all dogs probably share common ancestry "from a single ancient, now-extinct wolf population," with limited gene flow from wolves since domestication but substantial dog-to-wolf gene flow.

By extracting and analyzing ancient DNA from skeletal material, the researchers were able to see evolutionary changes as they occurred thousands of years ago.

For instance, European dogs around four or five thousand years ago were highly diverse and appeared to originate from highly distinct populations from Near Eastern and Siberian dogs. But over time, this diversity was lost.

"Although the European dogs we see today come in such an extraordinary array of shapes and forms, genetically they derive from only a very narrow subset of the diversity that used to exist," said the paper's lead author Anders Bergstrom.

Evolutionary pathways between our two species have at times followed similar routes.

Humans, for example, have more copies than chimpanzees of a gene that creates a digestive enzyme called salivary amylase, which helps us break down high-starch diets.

Likewise, the paper demonstrated that early dogs carried extra copies of these genes compared to wolves, and this trend only increased over time as their diets adapted to agricultural life.

This builds on previous research that found Arctic sled dogs, like Inuits, have evolved similar metabolic pathways to allow them to process high-fat diets.

There have also been periods when our histories have not run in parallel – for example, the loss of diversity that once existed in dogs in early Europe was caused by the spread of single invasive species, an event not mirrored in human migrations.

The field of ancient DNA study has revolutionized the study of our ancestors and researchers are hopeful it can do the same for dogs, our longest animal allies.

"Understanding the history of dogs teaches us not just about their history but also about our own history," said Bergstrom.