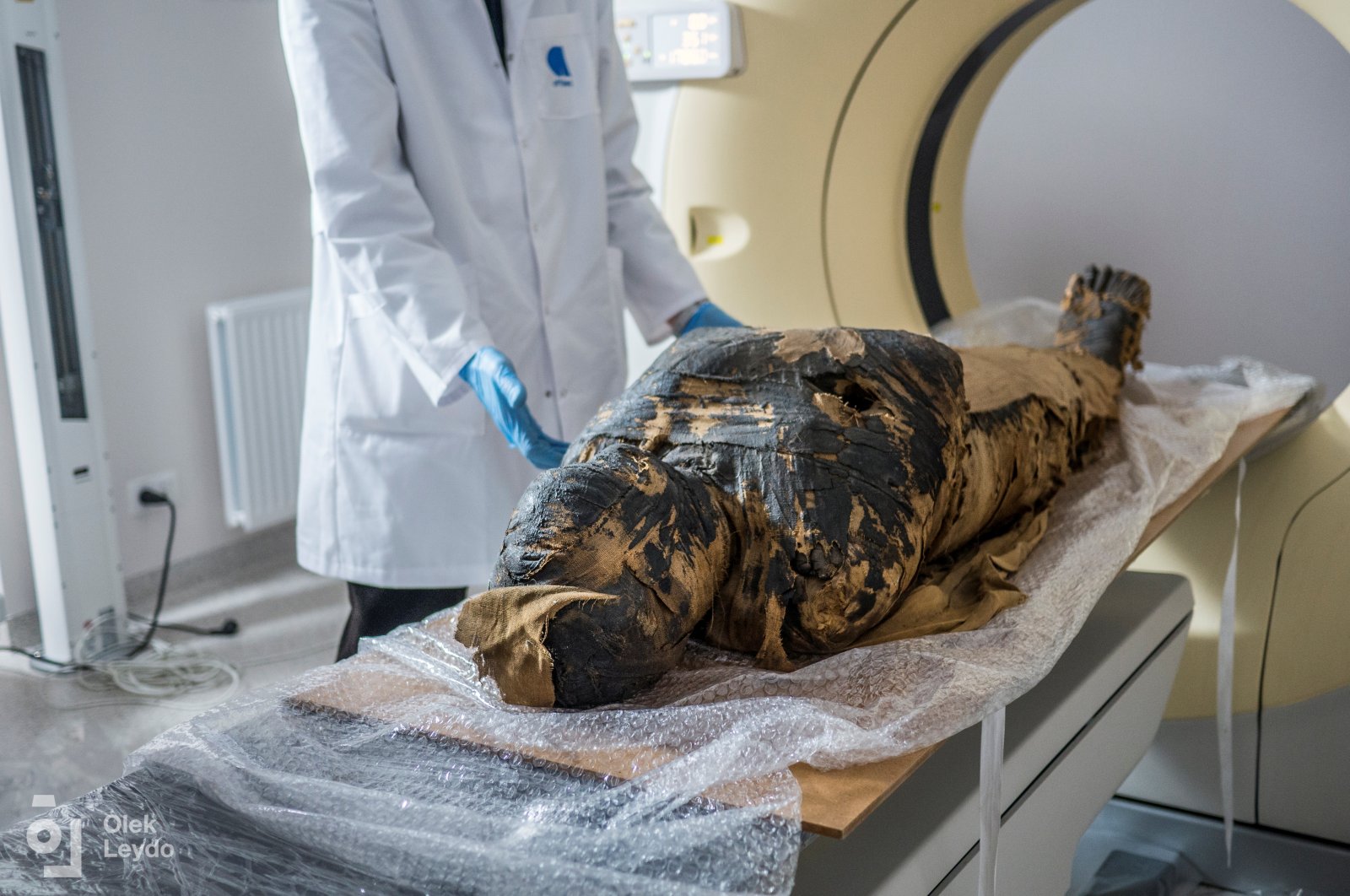 This handout picture made available by the Warsaw Mummy Project on April 29, 2021 shows the pregnant Egyptian mummy being prepared for X-Ray images taken on December 15, 2015, at a medical center in Otwock near Warsaw, Poland. (REUTERS Photo)
by Agencies May 05, 2021 12:44 pm
RECOMMENDED

Polish researchers announced Thursday that they have discovered that a 2000-year-old embalmed body of a woman was seven months pregnant at the time of her death, making the find world's first pregnant Egyptian mummy. The team also did X-rays and computer tests on what they believe to be a male priest.

Marzena Ozarek-Szilke, an anthropologist at the Warsaw Mummy Project, was examining a CT scan of a mummy at the National Museum in the Polish capital when she spotted something peculiar.

"When I looked at the lesser pelvis of our mummy I was interested in what was inside... I thought I saw a tiny foot," Ozarek-Szilke said. She asked her husband, an archaeologist who also worked on the project, to take a look.

"My husband looked at the picture and as a father of three, he said: 'Well, that's a foot'. At that moment ... the whole picture started to come together," Ozarek-Szilke told Reuters.

The mummy came to Poland in the 19th century when the nascent University of Warsaw was creating an antiquities collection. For decades, it was thought the mummy belonged to an ancient Egyptian priest named Hor-Dehuti.

However, in a discovery revealed in the Journal of Archaeological Science on Thursday, scientists at the Warsaw Mummy Project said the mummy was in fact a woman in her twenties who was between 26 and 28 weeks pregnant.

The cause of death is not clear, but Ozarek-Szilke said the pregnancy may have had something to do with it.

"It is possible that the pregnancy itself contributed to the death of this woman. Now we have modern medicine, women who are between 20 and 30 weeks pregnant and something happens to the pregnancy, they have a chance to be rescued. It used to be impossible," she said.

"This is the first known case of a pregnant embalmed body... It opens up new possibilities of researching pregnancy in ancient times and practices related to maternity," the article said.

The discovery sheds some light on the little-known role of children in ancient Egypt and the religious beliefs of the time, but also raises many questions, according to Wojciech Ejsmond, co-director of the Warsaw Mummy Project.

"What was the status of this child in the Egyptian religion? Did it have a soul, could it go to the afterlife on its own, could it be reborn in the afterlife... if it was not yet born?"

"We do not know why the fetus was not taken out of the belly of the deceased during mummification," Ejsmond told Agence France-Presse (AFP) and added, "That is why this mummy is truly unique. We have not been able to find any similar cases. This means that 'our' mummy is the only recognized in the world with a fetus."

Ejsmond said scientists would study the mummy further to determine the cause of death and establish why the fetus not removed from the body.

"We must be open to all possibilities," he said.