Remains of slave room unearthed at Pompeii in 'rare' find 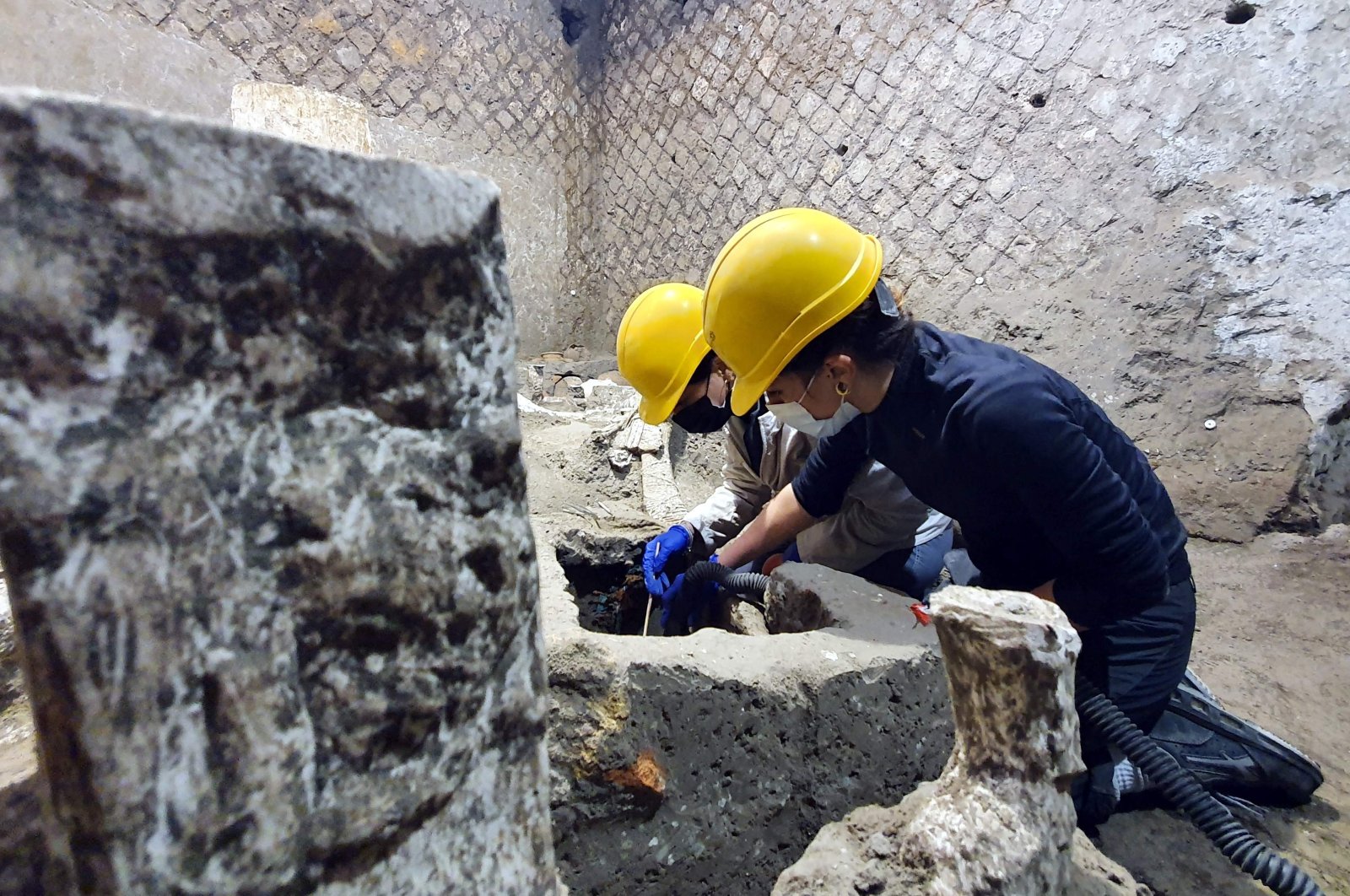 A photo handout on Nov. 6, 2021, by the Pompeii Archaeological Park shows archaeologists working in "The room of Slaves," an exceptionally well-preserved room for the slaves who worked in Villa Civita Giuliana in Pompeii, a villa where a ceremonial chariot and a stable with a harnessed horses were earlier unearthed. (POMPEI ARCHAEOLOGICAL PARK via AFP Photo)
by French Press Agency - AFP Nov 06, 2021 3:18 pm
RECOMMENDED

Ella IDE Pompeii archaeologists said Saturday they have unearthed the remains of a "slave room" in an exceptionally rare find at a Roman villa destroyed by Mount Vesuvius' eruption nearly 2,000 years ago.

The little room with three beds, a ceramic pot and a wooden chest was discovered during a dig at the Villa of Civita Giuliana, a suburban villa just a few hundred meters from the rest of the ancient city.

An almost intact ornate Roman chariot was discovered here at the start of this year, and archaeologists said Saturday that the room likely housed slaves charged with maintaining and prepping the chariot.

"This is a window into the precarious reality of people who rarely appear in historical sources, written almost exclusively by men belonging to the elite," said Pompeii's director general Gabriel Zuchtriegel.

The "unique testimony" into how "the weakest in the ancient society lived ... is certainly one of the most exciting discoveries in my life as an archaeologist," he said in a press release.

Pompeii was buried in ash when Mount Vesuvius erupted in 79 A.D., killing those who hadn't managed to leave the city in time. They were either crushed by collapsing buildings or killed by thermal shock.

The 16-square meter (170-square feet) room was a cross between a bedroom and a storeroom: as well as three beds – one of which was child sized – there were eight amphorae stashed in a corner.

The wooden chest held metal and fabric objects that seem to be part of the harnesses of the chariot horses, and a chariot shaft was found resting on one of the beds.

The remains of three horses were found in a stable in a dig earlier this year.

"The room grants us a rare insight into the daily reality of slaves, thanks to the exceptional state of preservation of the room," the Pompeii archaeological park said.

Experts had been able to make plaster casts of the beds and other objects in perishable materials that left their imprint in the cinerite – the rock made of volcanic ash – that covered them, it said.

The beds were made of several roughly worked wooden planks, which could be adjusted according to the height of the person who used them.

The webbed bases of the beds were made of ropes, covered by blankets.

While two were around 1.7 meters long (5 feet, 7 inches), one measured just 1.4 meters, and may therefore have belonged to a child.

The archaeological park said the three slaves may have been a family.

Archaeologists found several personal objects under the beds, including amphorae for private things, ceramic jugs and what might be a chamber pot.

The room was lit by a small upper window, and there are no traces of wall decorations, save a mark believed to have been left by a lantern hung on a wall.

The excavation is part of a program launched in 2017 aimed at fighting illegal activity in the area, including tunnel digging to reach artifacts that can be sold on illicit markets.

The Villa of Civita Giuliana had been the target of systematic looting for years. There was evidence some of the "archaeological heritage" in this so-called slave room had also been lost to looters, the park said.

Damage by grave robbers in the villa had been estimated so far at almost two million euros ($2.3 million), it added.