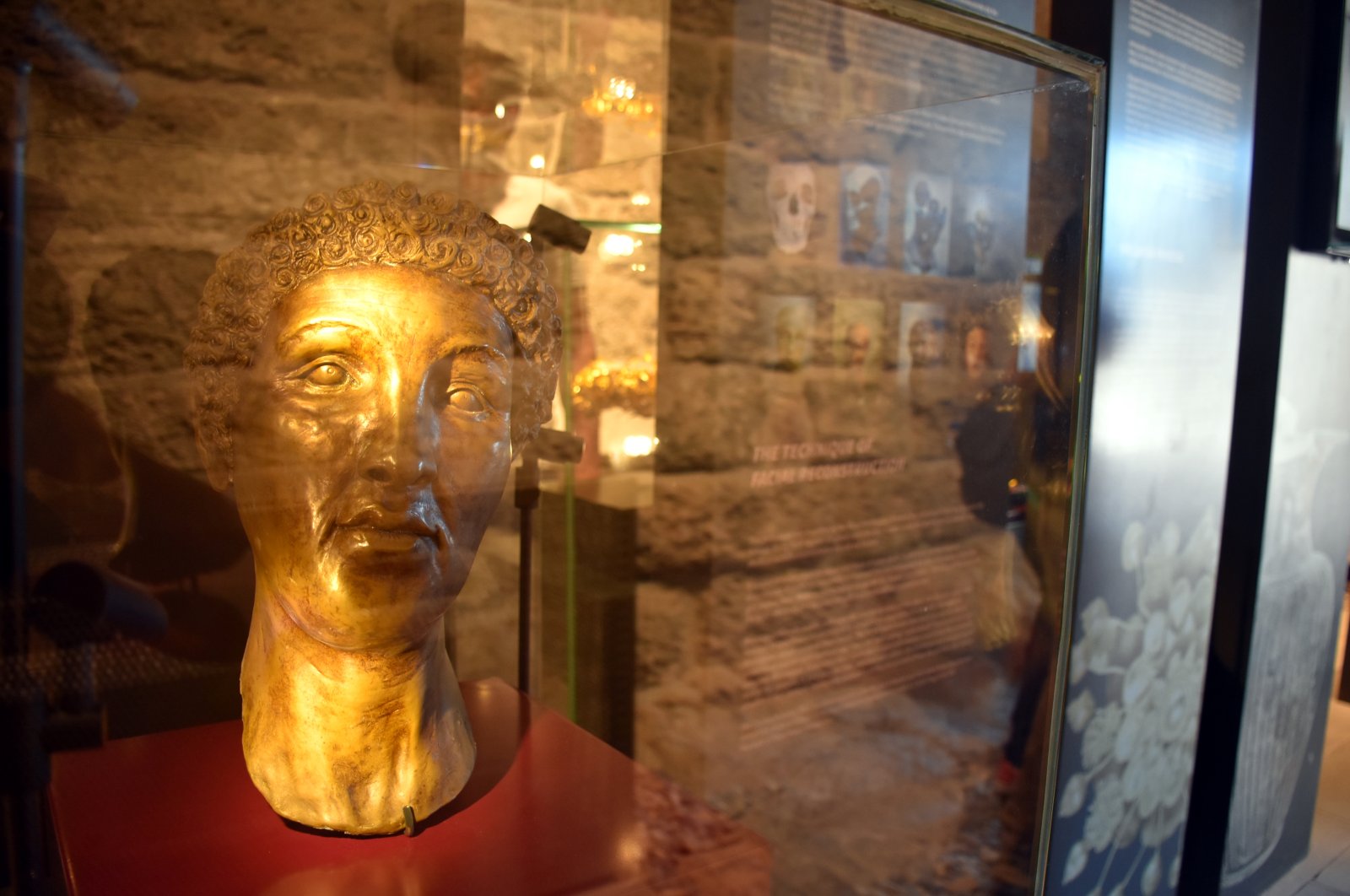 The original face mask of the "Carian Princess" made to adorn the skeleton.
by Anadolu Agency Aug 25, 2020 12:34 pm
RECOMMENDED

The tomb and golden jewels of the Bronze Age "Carian Princess," discovered during excavation work on the site of an ancient necropolis in the Bodrum district of Muğla, have attracted a throng of visitors following the completion of restoration work on the hall of Bodrum Castle.

An archaeology team came across the tomb during excavations in the Yokuşbaşı neighborhood in 1989. Upon removing the lid of the sarcophagus in the middle of the burial chamber, archeaologists found a skeleton of a woman with her arms crossed and adorned in golden trinkets.

According to the results of an anthropological skeletal analysis, it was discovered that the woman had died at the age of 40, while her hip bone revealed that she had given birth to more than one child. It was also understood from the quality of her teeth that she had a high standard of living.

The rich findings at the tomb – not least the golden crown – show the tomb belonged to a person of high social status.

Forensic facial reconstruction work on the skull revealed that the ancient noblewoman exhibited a likeness to two female marble busts found in the British Museum. Scholars having associated these busts with Queen Ada of Caria and, when data was compiled, this was deemed the most likely theory.

However, because there was not enough scientific data for an exact identification, the individual in the tomb has since come to be referred to as the "Carian Princess."

Indicating that they had opened the grave in the new hall after the completion of the second stage restoration work, Toprak stated: “The Tomb of the Carian Princess, and her golden crown and artifacts, in particular, are of great interest. The skeleton of the princess is also on display in this hall. A wax sculpture created by a new facial recognition technology can also be seen here.”

Toprak also noted that the gold necklace and crown of the Carian Princess were on display on the hall's interactive screen and that visitors could download a photograph adorned with the artifacts via a QR code.

Stating that this photo was a memorable souvenir from the museum, Toprak noted: “Because the Carian Princess was an important person, we are exhibiting the artifacts in a separate hall in the castle. I would like to invite local and foreign holidaymakers visiting Bodrum to explore the renovated halls and historical areas, especially the Carian Princess' hall.”