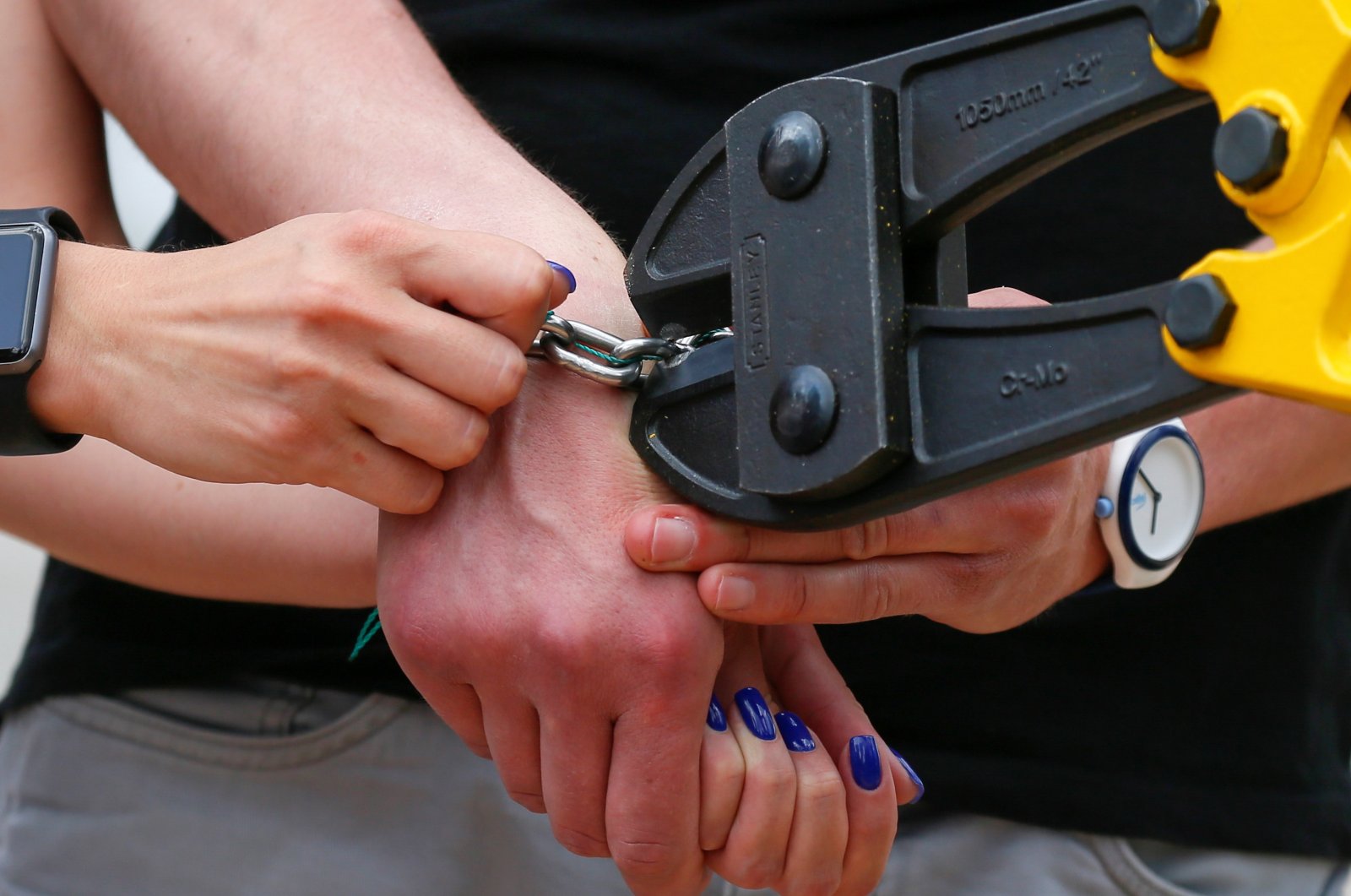 Alexandr Kudlay and Viktoria Pustovitova, who handcuffed themselves and spent 123 days together, have the chain dismantled by a representative from a Ukrainian record book in Kyiv, Ukraine, June 17, 2021. (Reuters Photo)
by REUTERS Jun 19, 2021 10:24 pm
RECOMMENDED

After 123 days of being handcuffed together, the Ukrainian couple Alexandr Kudlay and Viktoria Pustovitova have decided to part ways.

Shedding their bonds on national TV, the young couple from the eastern city of Kharkiv said the experiment had brought home uncomfortable truths.

Kudlay and Pustovitova had decided to handcuff themselves together on Valentine's Day, in a last-ditch attempt to break the cycle of breaking up and making up.

Throughout the experiment, which they documented to a growing social media following, they did everything together, from grocery shopping to cigarette breaks. They took turns to use the bathroom and take showers.

Pustovitova, who initially resisted the handcuff idea, shed tears as she discussed the latest break-up.

"I think it will be a good lesson for us, for other Ukrainian couples and couples abroad not to repeat what we have done," she told Reuters in an interview in Kyiv.

Pustovitova said personal space is what she missed most, although she also felt her boyfriend did not pay her enough attention while they were chained together.

"We stayed together all day, I did not receive any attention from Alexandr because we were constantly together. He did not tell me: 'I miss you,' while I would like to hear that," said the 29-year-old beautician.

Kudlay said he did not regret resorting to desperate measures to save the relationship, adding that the cuffs helped him understand that the two were not "like-minded people."

"We are not on the same wavelength, we are totally different," the 33-year-old car salesman said.

The couple plan to sell the handcuffs in an online auction and donate part of the money to charity.

They had the bonds removed in front of Ukrainian TV news channels and a representative from a Ukrainian record book, who said no couple in the world had managed a similar feat.

Their last photo on Instagram, where they have more than 7,800 followers, showed the couple standing apart, looking at the floor.