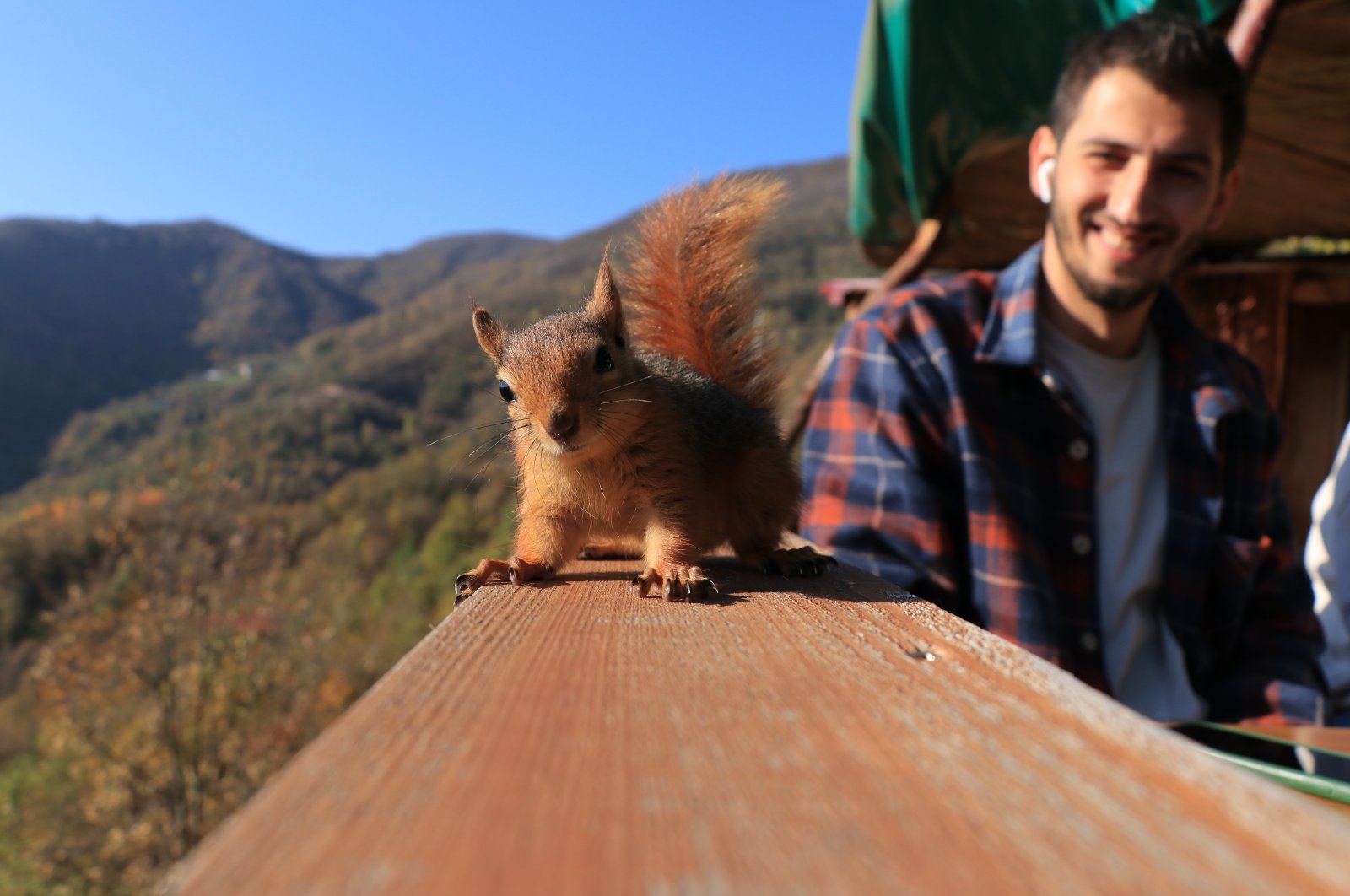 A Turkish couple has taken in a squirrel as a new member of their family. (AA Photo)
by Anadolu Agency Nov 24, 2021 10:41 am
RECOMMENDED

A Turkish couple in northwestern Turkey went hiking in a nearby forest but ended up finding a fluffy new member for their family.

Enes and Minel Kılıç, who run a cafe in the province of Kocaeli, found a squirrel alone and hurt in a tree hollow while hiking in a woodland near their home in the Yuvacık neighborhood.

Immediately taking him to a vet, they quickly got used to each other, with their furry friend, whom they have named Alvin, refusing to leave their side despite multiple attempts to release him back into his natural habitat.

Nowadays, Alvin spends his nights with the Kılıç couple, sleeping in a fleece blanket on his own chair in their bedroom, and accompanies them during the day to their cafe, where he likes to munch on french fries and sip tea, overlooking the trees below.

Enes told Anadolu Agency that Alvin was just a tiny, hairless kit when they found him.

"It's been about three weeks since we found him. We came across him in a tree hollow. He was still very small then, he almost didn't even have any fur. When we found him all alone, we decided to take him to the vet," he said.

Alvin likes his new home, with Enes often waking up to find him in his jacket pocket in the morning. He has even become something of a celebrity for their customers.

"Our days are really fun (with Alvin). Our guests ask about him all the time. In fact, some even invite him to have breakfast with them," he said, adding that many customers take pictures and videos with Alvin to post on social media.

The couple also makes sure that Alvin is happy and healthy in their care, feeding him a diverse and diet of nuts and seeds, including walnuts, pistachios and almonds.

"He likes pistachios the most," says Kılıç, adding that they avoid feeding him just one kind of food. "If he eats pistachios in the morning, he has flower seeds in the evening."

The couple has tried to return Alvin to the forest, but found that he always found his way back to their house.

"We are very used to Alvin. We never wanted to separate him from his natural (home). But, especially after seeing him return to us, we got very attached and now, we can't let him go," said Minel.

Still, the couple plan to let him go in the future, she added, but until then he has gotten used to their home and, since their cafe is just a stone's throw from the forest, he isn't deprived of trees, either.

"We also opened a social media account for him!" she said, adding that Alvin has his own room at their house, where he plays and jumps about. "He's very happy with us," she said.