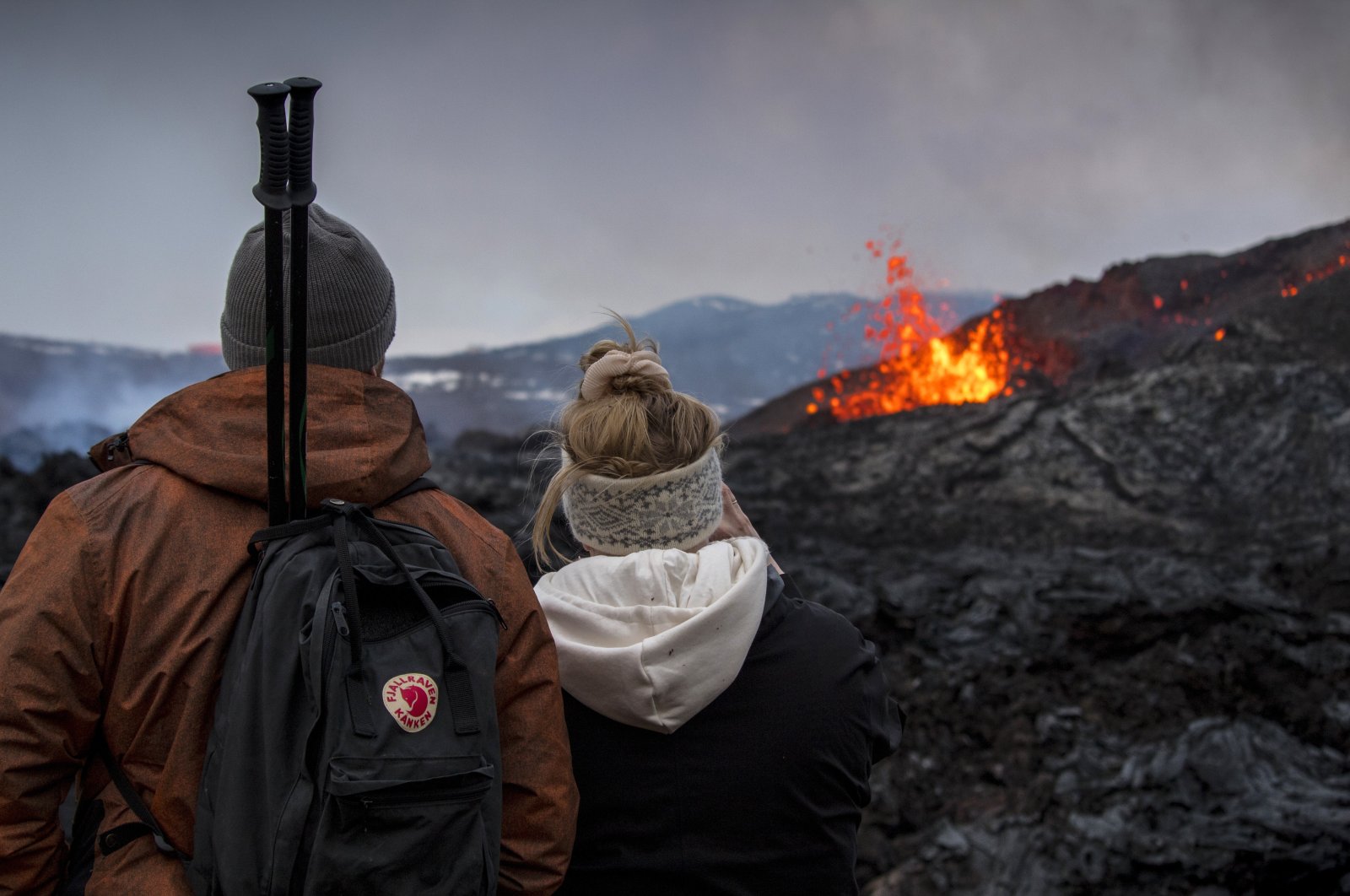 People watch the Lava flows from an eruption of a volcano on the Reykjanes Peninsula in southwestern Iceland on Wednesday, March 31, 2021. (AP Photo)
by REUTERS
Apr 01, 2021 2:26 pm

What would you do when if faced with an erupting volcano? Absolutely not play volleyball, right?

However, a group of volleyball players have been captured on camera enjoying a game in a most unusual setting – in front of an erupting volcano in Iceland.

In the footage, filmed on March 27, Thelma Dögg Grétarsdóttir, 23, from Mosfellsbær Iceland, can be seen with her partner Sigþór, her coach Bojor and some friends tossing a volleyball to one another in front of the lava-spewing crater.

It was shot next to the Fagradalsfjall volcano, which can be seen violently bubbling away in the background.

The video has since gone viral on social media, with 850,000 likes since being shared on March 29 with users blown away by the clip. “Amazing,” wrote one viewer.

“Our minds are blown,” commented another user.

“Who’s going to get the ball when it goes into the lava?" somebody else joked.

Grétarsdóttir and her friends were inspired to hike to the volcano while participating in a challenge with other volleyball groups in their area.

“So there’s a Pepper Challenge going on with beach volley vikings where the point is to pepper and make a great video and you can win a prize,” the trainee occupational therapist told Jam Press.

“I wasn’t going to participate but when the volcano started erupting I thought that this opportunity was almost too good to not do it. So I talked about it with Sigþór and got him to join me. When we got there I saw my coach Borja and heard that he had the same idea as me. In the end, we decided to make one video together instead of sending two into the competition,” he said.

The volcano is located on the Reykjanes Peninsula, around 40 kilometers (24.85 miles) from Reykjavík, and Grétarsdóttir had to hike for three hours to get there from her hometown.

She said: “We chose our time very carefully because we wanted to go when there weren’t as many people. So we left my town at five in the morning and started walking around 6 a.m. The hike is nice, there are two hills that can be tough so it’s really important that you are wearing the right gear but after that, it’s really nice. It was definitely a new experience."

“It’s actually much harder than it looks, I’ve been watching the video and at one point I was thinking why I didn’t play better but it was surprisingly cold, it was, minus 12 Celsius, really cold, and strong winds, so we were actually freezing. We tried to find the best spot to do it and this was it, but we were standing on a hill so the ground was leaning," she added.

"So it’s not really stable but we were at a safe distance from the volcano and with people ready to help if we needed. We stayed up there for probably 30 to 40 minutes. For safety reasons, you're not allowed to stay there [longer]. The Icelandic rescue team took really good care of everyone and made sure we stayed safe," she said.

“Afterwards, we sat down with hot chocolate and enjoyed the view,” she concluded.