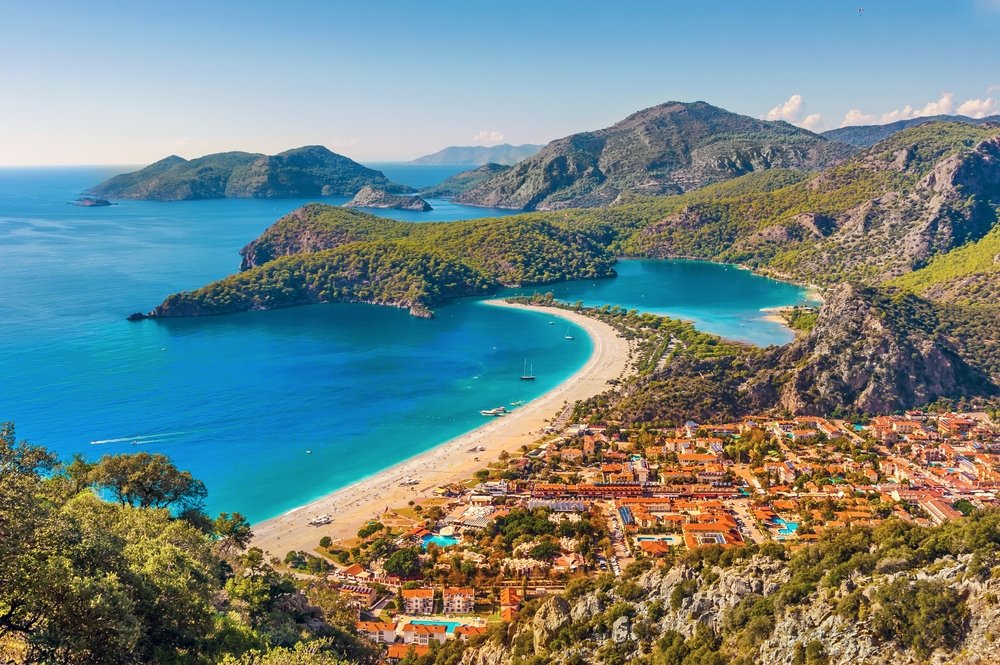 As the weather gets hotter, people are in search of places where blue and green meet to escape the chaos of the city. Turkey's Fethiye is surely one of those places

Since the beginning of the summer season, Turkey's pristine blue waters have been attracting a stream of visitors to its Mediterranean and Aegean coasts.

Some of the most beautiful of these beaches, which have caught the attention of Hollywood stars as well as local and foreign tourists this summer, are in the Fethiye district of the Aegean province of Muğla.

The district also offers a wide variety of leisure activities for the new generation with its valleys, bays, islands, beaches and extreme sports. With its rich historical texture and so many places to see, the region promises an unforgettable holiday.

Here are 10 must-see places in Fethiye for those who are tired of the chaos of the city and want to immerse themselves in the bosom of nature.

Çalış Beach is one of the most beautiful beaches in the region, calling out to its guests with its kilometers of coastline as well as hotels, restaurants and many souvenir shops.

The beach offers a magnificent visual feast for those who want to walk against the warm summer breeze in the evenings and is an ideal holiday spot for families.

Lycians referred to this special place as the land of light and sun while it was known as the "Far Land" in the Middle Ages. Ölüdeniz (Dead Sea), one of Turkey's most important natural beauties, is a turquoise paradise hidden behind steep hills, sitting in the shadow of Babadağ (ancient Mount Cragus).

Ölüdeniz is a spot that holidayers shouldn't miss. This paradise offers many water sports for adventure-seeking visitors. Activities such as water skiing, wakeboarding, windsurfing and kite surfing also attract attention.

Butterfly Valley, another one of the country's natural treasures, is surrounded by steep cliffs with an elevation of 350 meters (1,148 feet). The valley was given its name as it is home to more than 80 species of butterflies, including the beautiful tiger butterfly, leaving visitors with unforgettable memories.

Kabak Bay, located on the historical Lycian Way, is one of the most beautiful bays in Turkey and the world. Kabak Bay, which welcomes people from all parts and regions of Turkey, fascinates everyone with its lush nature.

It would be unfortunate to visit Fethiye and not take a tour of the 12 Islands on one of the daily boat trips. Vacationers should definitely allocate a day for this tour.

Paragliding on skirts of Babadağ Mountain

Ölüdeniz is an ideal place for paragliding.

Who wouldn't want to climb Babadağ and glide like a bird over a magnificent view of Ölüdeniz. Even those who have no experience can enjoy the thrill of paragliding with the help of professional instructors.

All you have to do is take a few steps and before you know your feet will be swept off the ground. Light and free as a bird!

One of the most important bays after Butterfly Valley and Kabak Bay is Cennet Bay (Paradise Bay), also known as Balartı Bay, which attracts visitors with its spectacular nature. There is a reason its name refers to paradise as the valley, nestled amid majestic mountains, could be mistaken for heaven with its turquoise sea and golden sandy beach.

Katrancı Nature Park, on the other hand, is a nature park in a forest covered with pine and eucalyptus trees. Visitors can swim in these two coves and generally opt for tents or caravans in terms of accommodation.

Another natural getaway Fethiye has to offer to its guests is Saklıkent Canyon. The canyon bestowed to us by nature is the ideal day trip. Saklıkent National Park, which is an hour away from Fethiye by car, is a unique beauty that everyone should visit.

Saklıkent means "hidden city" in Turkish. The canyon stretches 16 kilometers (10 miles) and it is recommended that only advanced hikers attempt to walk its full length using professional equipment.

Dalaman Stream, which is a must for adrenaline enthusiasts, is ideal for those who love rafting. With its 26-kilometer rafting racetrack, the stream is a good option for groups of friends looking for a big dose of adrenaline.

Fethiye's central Fish Market, which offers the opportunity to eat the fish you want in the restaurant you want, consists of a large round fish counter in the middle and restaurants around it. The place allows its visitors to eat fresh fish with delicious starters.

Get lost in old town of Paspatur

Paspatur takes its guests on a mystical journey with its bazaar filled with souvenir shops, cafes, carpet makers, boutiques and jewelers. The old city was named after the Paspatur that flowed through the middle for centuries.

Though it is said not to be suitable for drinking, there is a belief that if you drink the water of Paspatur you will remain in Fethiye or come back again. Those who have chosen to settle in Fethiye are said to have drunk the Paspatur water.

The 230-year-old Old Mosque, which is one of the oldest surviving structures in Fethiye, and the Ottoman Bath, which was built 130 years ago, have been in service ever since their construction.

In the early 1900s, many houses were evacuated after the Greeks left the city due to the population exchange. Some structures have been turned into warehouses for crops produced by the local farmers and housed small tradesmen such as carpenters, blacksmiths and mechanics.