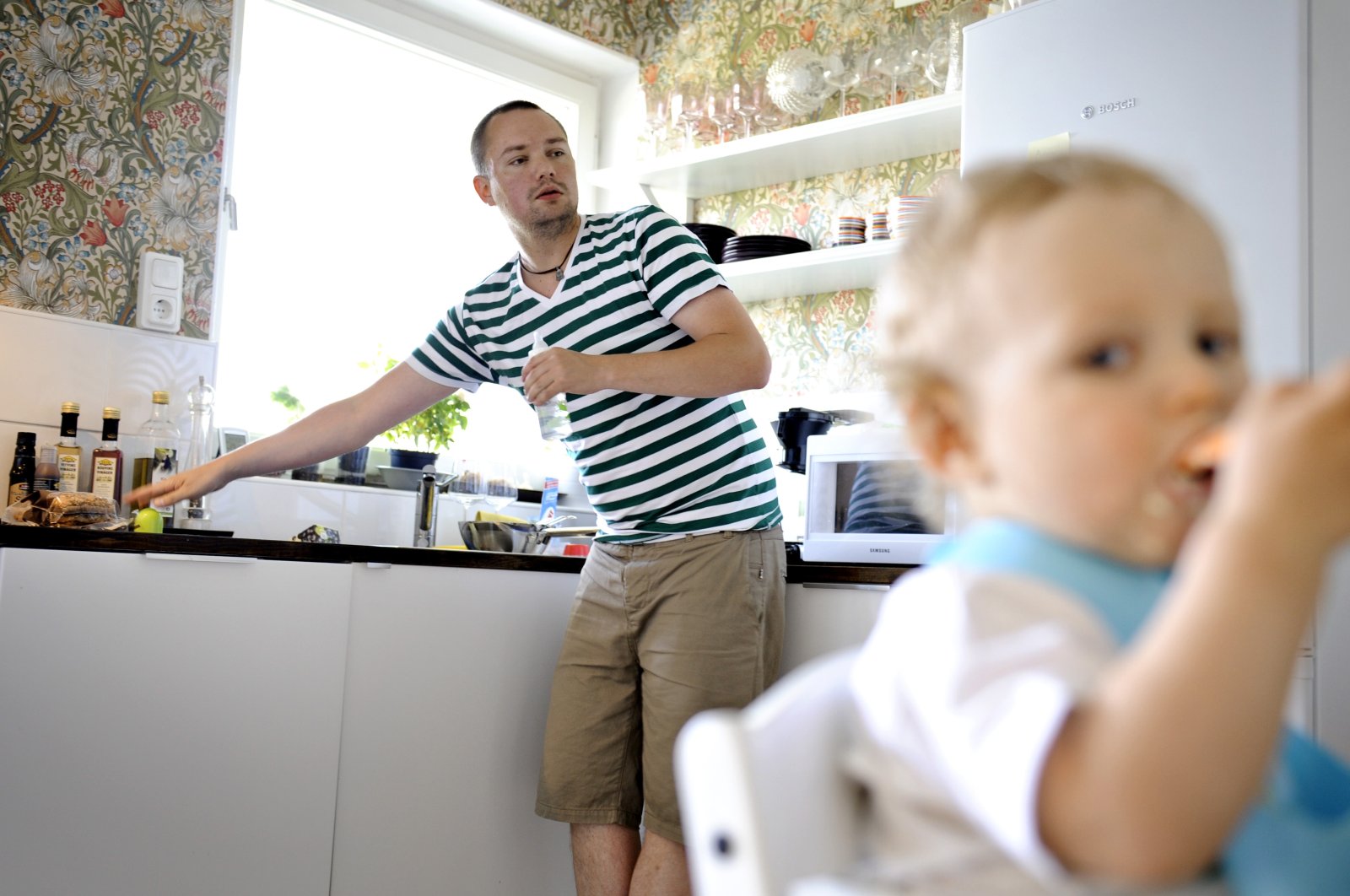 Henrik Holgersson cares for his son, Arvid, in the kitchen of their home in Stockholm, June 29, 2011. (AP Photo)
by Anadolu Agency Aug 11, 2020 11:55 am
Edited By Yasemin Nicola Sakay
RECOMMENDED

Employed men working from home during lockdowns and self-imposed quarantines amid the global COVID-19 pandemic took on five times more household chores than before. However, women still outdid men by a mile – four times as much as men to be exact.

The findings come as a result of a series of surveys conducted by pollster KONDA and supported by the United Nations Development Program (UNDP) during the month of May as lockdowns were in effect across much of the country.

"Despite the rise in men's contribution to household chores, women shouldered most of the household labor, doing nearly four times as much unpaid work as men," Ipek Ilkkaracan, who helped prepare the survey, told Anadolu Agency (AA).

She said the study shows when working hours are reduced to reasonable levels or remote working is promoted in Turkey, men will take on more chores.

School closures, the rising demand for household consumption items and domestic and care services triggered an unprecedented increase in the demand for household labor for both men and women. The survey underlined that women’s total workload – paid and unpaid work combined – remains higher than that of men.

For employed women, who continue to work in the workplace, the total work time was longer than 10 hours per day.

"This may affect women's employment negatively as they will be reluctant to continue working in these conditions, which results in lower life quality for women and increased gender inequality," Ilkkaracan, who is a lecturer at Istanbul Technical University (ITÜ), stressed.

She noted that some 50% of women struggle to cope with this burden, while only half of the men – 24% – said the same.

"Bearing such a heavy burden of household chores weakens their commitment to their paid work, as it is not sustainable," Ilkkaracan said.

"An equal sharing of chores is the key to gender equality in the labor market between men and women."

The survey showed that women are nearly twice as likely to switch to working from home compared with men and also had less access to paid leave.

While nearly twice the number of men as women reported employment disruption due to the pandemic, employed women face higher risks in this regard, the survey found.

"Women had to switch to remote working to set a balance as schools closed and due to not having external support for elderly, ill and disabled care," Ilkkaracan explained, as women normally end up shouldering this burden not normally counted in most economic models.

She also stressed that 85% of women and 65% of men in couples believe that household work should be shared more equally between genders.

"This ratio is 89% for employed women," Ilkkaracan said.

The study also called for changes to workplace and social care policies to redistribute unpaid care and domestic work.

"The economic administration unveiled drastic relief measures to curb the economic fallout from coronavirus,” she said, but urged them to also “allocate a reasonable amount for social care work, which will also create employment."