No way back? Tattoo removal is painful but possible 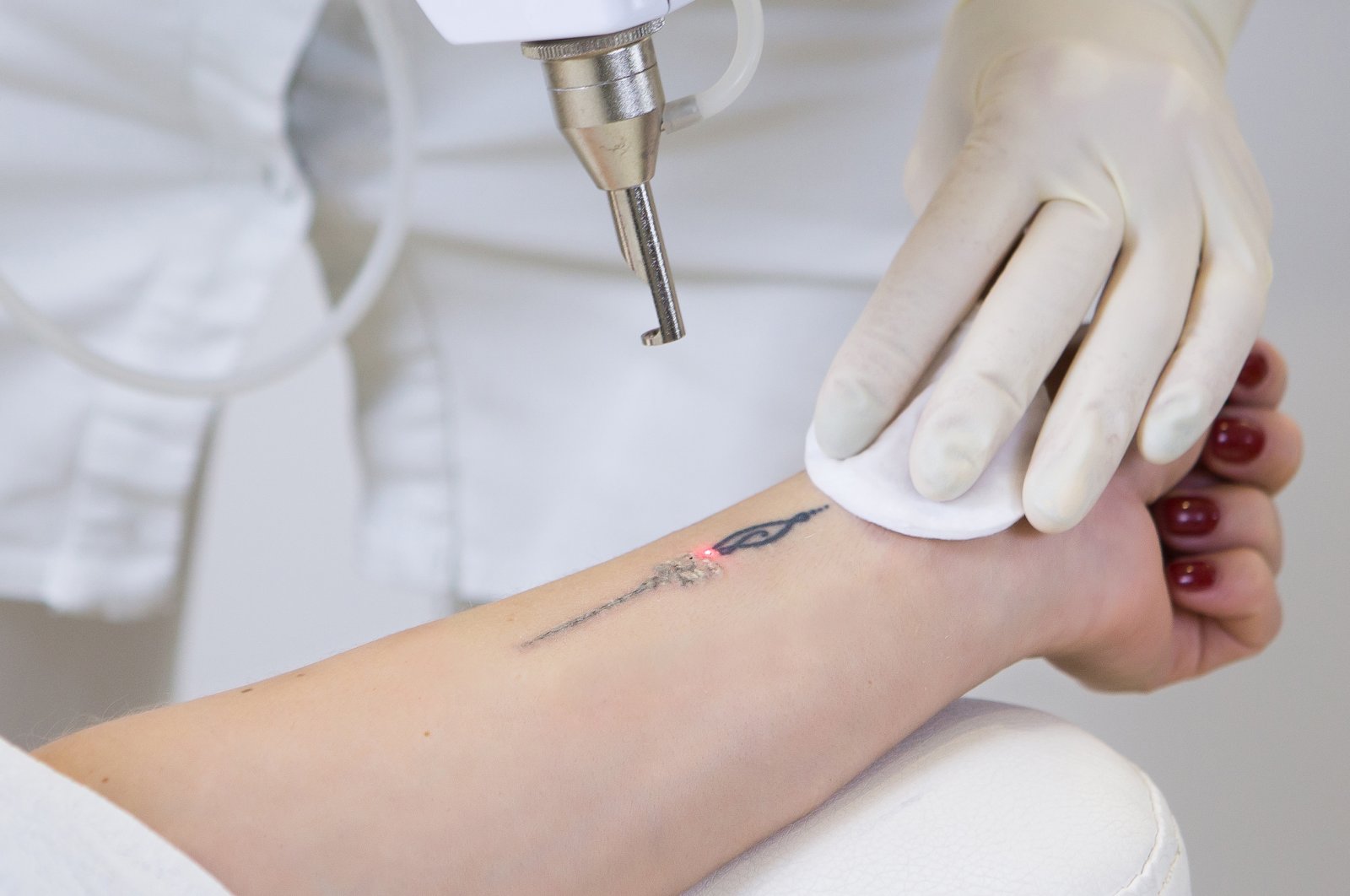 If a tattoo is removed by laser, the treatment usually has to be repeated several times. (Shutterstock Photo)
by German Press Agency - DPA
Oct 13, 2021 10:34 am

You get your first tattoo and you are possibly the happiest person on the planet, but a few years go by and it turns out to be your biggest regret. What do we do now?

The problem is that tattoos – in contrast to low-rise jeans and crop tops, whose popularity at the time provided a readily visible surface for lower-back tattoos – can't simply be tossed into the corner of your wardrobe when they're "out." They're meant to be permanent. There are, however, ways to remove unwanted tattoos, but complete removal is difficult.

Laser treatment uses rapid, concentrated bursts of energy to heat up the ink beneath the skin, which breaks up the ink into smaller particles that can be flushed away by the lymphatic system. The procedure takes a few minutes and can be very painful. One session isn't enough to lighten the tattoo, though.

The treatment must be repeated several times, with four to six weeks between sessions to give the body time to eliminate the ink particles and your skin a chance to heal.

"You mustn't forget that a laser isn't an eraser and always leaves marks," says Sembt. The number of sessions needed, and whether the tattoo ever disappears completely, depends on many factors, including the inks that were used and the tattoo's age.

"You've got to plan on at least 10 sessions – upwards of a year, in other words – to have a tattoo removed," remarks Dr. Peter Arne Gerber, who is vice president of the German Dermatological Laser Society (DDL) and has written a book on the subject. The upside of laser treatment is that you're very likely to remain scar-free, he says.

"The downside is that it takes a long time and isn't inexpensive."

Since the start of this year, only licensed doctors are permitted to do laser treatment removal of tattoos in Germany, a regulation that's controversial in the tattoo industry. "Laser treatment should only be carried out by pros – that's clear," remarks Sembt. "But who says they can't also be professional tattoo artists?"

Tattoo artists are usually involved in any case, because more than 75% of laser treatments aren't meant to remove a tattoo completely, but to correct it or lighten it to an extent that can be easily covered up by another tattoo.

"Having a tattoo often isn't a problem for people. They simply want the design to disappear or to replace a poorly inked or runny tattoo with one that's nicely done," says tattoo artist Dennis Blume, proprietor of Art Visions Tattoo & Cosmetics in Berlin.

"The advantage of over-tattooing (cover-up) is that the old tattoo disappears quickly and completely," he points out, adding that the result is also more predictable than that of laser treatment without a subsequent cover-up, when "you never quite know in advance how much it will lighten and what it will ultimately look like."

There are various ways to get rid of an unwanted tattoo besides laser treatment and cover-up with another tattoo. It can be surgically removed by cutting it out of the skin, which is only possible without requiring subsequent skin transplantation if the tattoo is small and narrow.

"A scalpel is used mostly when laser treatment doesn't work, for instance, because of an allergy," Sembt notes. It leaves a scar and, as with all surgical procedures, carries risks.

Both experts discourage the use of creams, lactic acid treatment, fruit acid peel and the like, warning they severely damage the skin and sometimes even cause chemical burns. Inflammation and scars could result as well.