On the same page: Glimpse inside Çarşamba Sahaf in Istanbul's Fatih 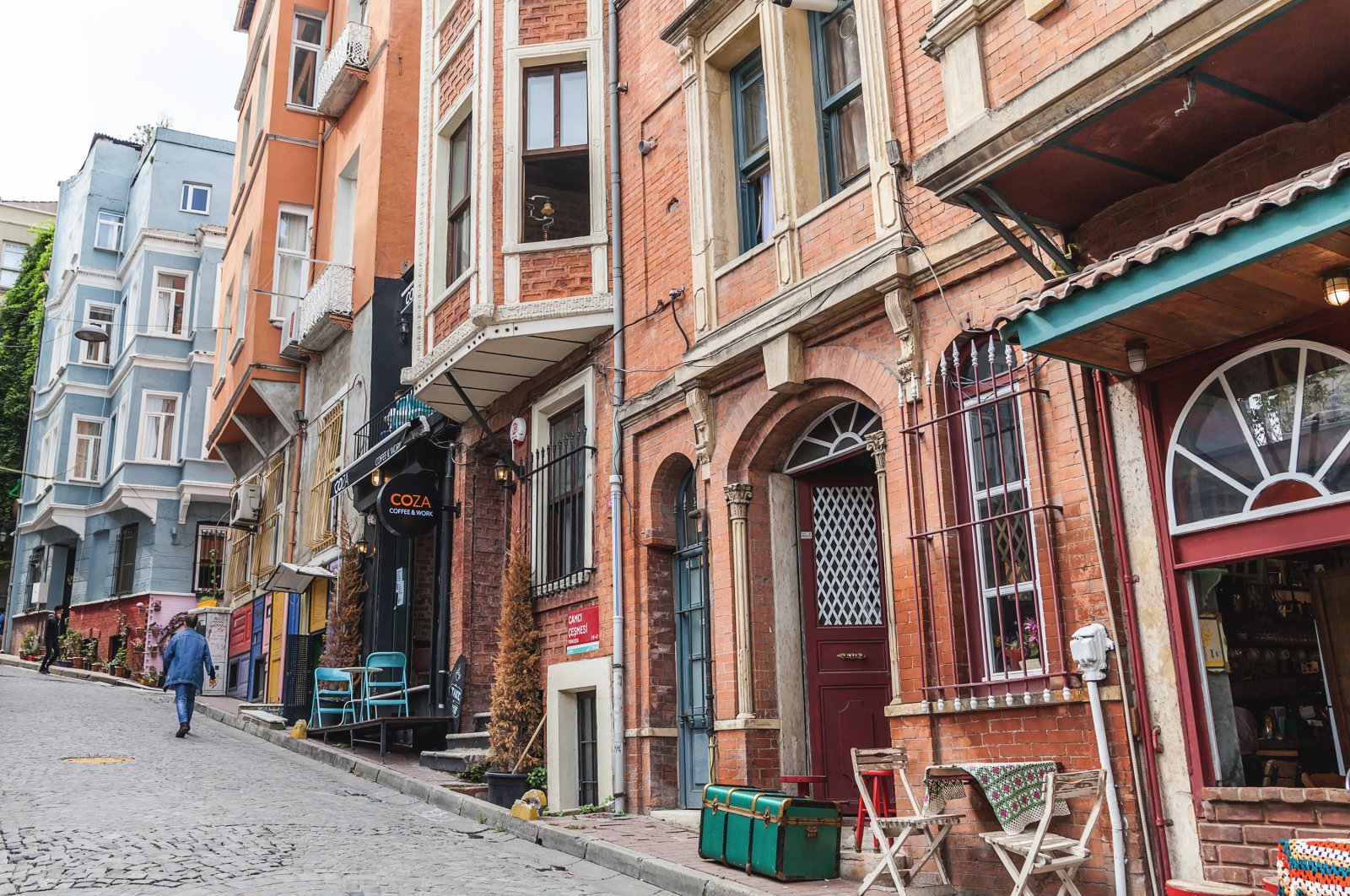 Streets are lined with stores and restaurants in the old quarter of Balat in Istanbul's Fatih district, Oct. 3, 2018. (Shutterstock Photo)
by Matt Hanson Jan 12, 2021 11:50 am
Edited By Yasemin Nicola Sakay

Not far from the Fener Greek Orthodox College and Primary School in Istanbul’s ancient district of Fatih, the neighborhood of Çarşamba is a buzzing literary hive of mainly religious books and secondhand surprises

Two men in long, flowing "cübbe" robes, turbaned in clean white garments, were spending their Monday afternoon perusing a used bookshop. Along the row of booksellers and publishers that dot the bustling, main thoroughfare of Manyasizade Avenue in the traditional quarter of Çarşamba, there is an indoor alley replete with books, new and old. Most are arcane, glossy hardcovers with Arabic print, encompassing the central canons of Islamic studies.

These men appear to be devotees of a specific order of Sunni Islam Sufism, and they literally wear their identity on their sleeves, proudly, in relatively uninterrupted continuity with the past. Çarşamba, which means Wednesday, ostensibly named after a bygone weekly market, is the heart of the Sunni conservative jamia known as Ismailağa, which aligns itself with the Naqshbandi spiritual order, and the Ismailağa community follows Mahmut Ustaosmanoğlu, or as his followers call him, Mahmut Efendi.

It is Istanbul lore that the community retained its traditions as part of a political strategy established by Kemal Mustafa Atatürk during his turbulent 15 years as the first president of the Republic of Turkey. It is said that he pardoned their outward, Ottoman-era religiosity as a buffer to stand as a pillar of strength beside the powerful Greek Orthodox community of Phanar, also spelled Fener, on the Golden Horn beside the increasingly gentrified environs of Balat.

The faith-oriented literary culture and bookshops of Çarşamba are an extension of its customs, in which small commercial outlets sell alcohol-free perfume and a premodern toothbrush called a miswak, which was said to have been used by the Prophet Muhammad. It is a world within a world, reminiscent of the Orthodox Jewish residents of Williamsburg, Brooklyn in New York.

The small businesses of Çarşamba exemplify the strict tenets of Muslim piety, and yet the district’s eponymous sahaf, or secondhand bookshop, is a stash of ulterior interests. Within its acquisitions of commentaries and treatises on the Quran, and elaborations on the rules of family life as prescribed by its belief system, there are occasional intellectual insights into broader streams of modern Turkish society.

To read, or write

One book, in Turkish, which Çarşamba Sahaf carries, breaks the mold of its generally religious stock. It is a selection of short fiction, titled, “Selected Stories from Turkish Literature,” published by the Women’s Coordination Center, and included 30 works of prose by authors who stretched the bounds of narrative style in Turkish. The best-known names are Oğuz Atay, Orhan Kemal, Sabahattin Ali, Sait Faik Abasıyanık and Yakup Kadri Karaosmanoğlu.

As is fair from a publication by a women’s society, the opening story in the book is by the female author Adalet Ağaoğlu, who recently passed away in July of 2020. Her short story, “Yol,” which translates to “road” or “way,” appears as a signpost. Many other women writers are featured in the collection, such as Emine Işınsu, Fatma Karabıyık Barbarosoğlu, Ayfer Tunç, Füruzan and Afet Ilgaz, although most are men.

After the passing of Ağaoğlu at the age of 91, Turkey, and readers of Turkish literature mourned her passing, for she was loved, both on the page and in life. She was not merely skilled with the pen but spoke out, as a voice, into the free air. Ağaoğlu was an advocate for human rights. And she was a late-bloomer, as her book publishing history began when she was already in her mid-40s.

Although only two of her novels have appeared in English, her Anglophone readers lavished her with praise. In his obituary for Cornucopia, David Barchard compared Ağaoğlu to American writer William Cuthbert Faulkner, who apparently inspired her to become what he described as a “master of the flashback narrative.” As Barchard explained, the appreciation of Ağaoğlu’s eight novels has broken fertile ground since the 1970s, toward a middle way between Kemalism and Islamism.

A contemporary of Ağaoğlu, while more prolific as a novelist, Emine Işınsu, took a more inward focus with her nearly 20 books steeped in philosophy and psychology. Meanwhile, the openly devout sociologist and writer, Karabıyık, trained her bookish mind on fashion, modernization and nonfiction studies of religious women. Of the same generation as Karabıyık, born in the 1960s, Ayfer Tunç found readerships in the Balkans and the Levant.

The fiction of Tunç has been translated into Arabic for readers in Syria and Lebanon in part due to the success of her short story collection, “The Aziz Bey Incident,” which was also published in English by Istros Books. Its title is about a Turkish folk musician who roams in and out of love from Istanbul to Beirut. The English translation is by Stephanie Ateş, who further broadcast one of the stories, “The Snow Traveller,” via The Short Story Project.

Füruzan is the pen name of Füruzan Yerdelen, a writer of short fiction whose collection, “A Summer Full of Love,” is one of five selections, along with Buket Uzuner and Aziz Nesin in the Turkish-English Short Story Collections series at the London-based Milet Publishing. Füruzan worked as an actor, married a cartoonist and won awards for her stories, a couple of which appear in English translations as published online by Istanbul’s elite Boğaziçi University.

In the same way that Turkish literary appreciation might tend toward male-dominance, Afet Ilgaz is remembered, if at all, in the shadow of her husband, the famous writer Rıfat Ilgaz. Yet, his wife, Afet, wrote some 30 books and in 1973, won the Turkish Writers’ Union award for the best novel and novelist that year. The Women’s Coordination Center did not publish a story by Rıfat in their collection.

I was just starting to work my way through the dizzying arrays of books inside the Çarşamba Sahaf, the vast majority of them as incomprehensible and unapproachable as the copy of a gilded Islamic manuscript in Russian when the bookseller stepped into the walk-in closet-sized room and asked if I was an Arab. He was wearing the garb of a local sect member and told me he would be leaving the store to pray. The message was clear.

I hesitated. I was in the middle of a yellowed paperback. It was a pocket-sized copy of “Chariots of the Gods” by the Swiss pseudo-historian, Erich von Däniken, translated into Turkish by Aslı Gizem Korkmaz. Däniken’s books claim that the prehistoric record reveals clues about extraterrestrial contact at the dawn of humanity. He saw “paleocontact” as a potential origin myth for spirituality. I did not believe a word but left with a story.