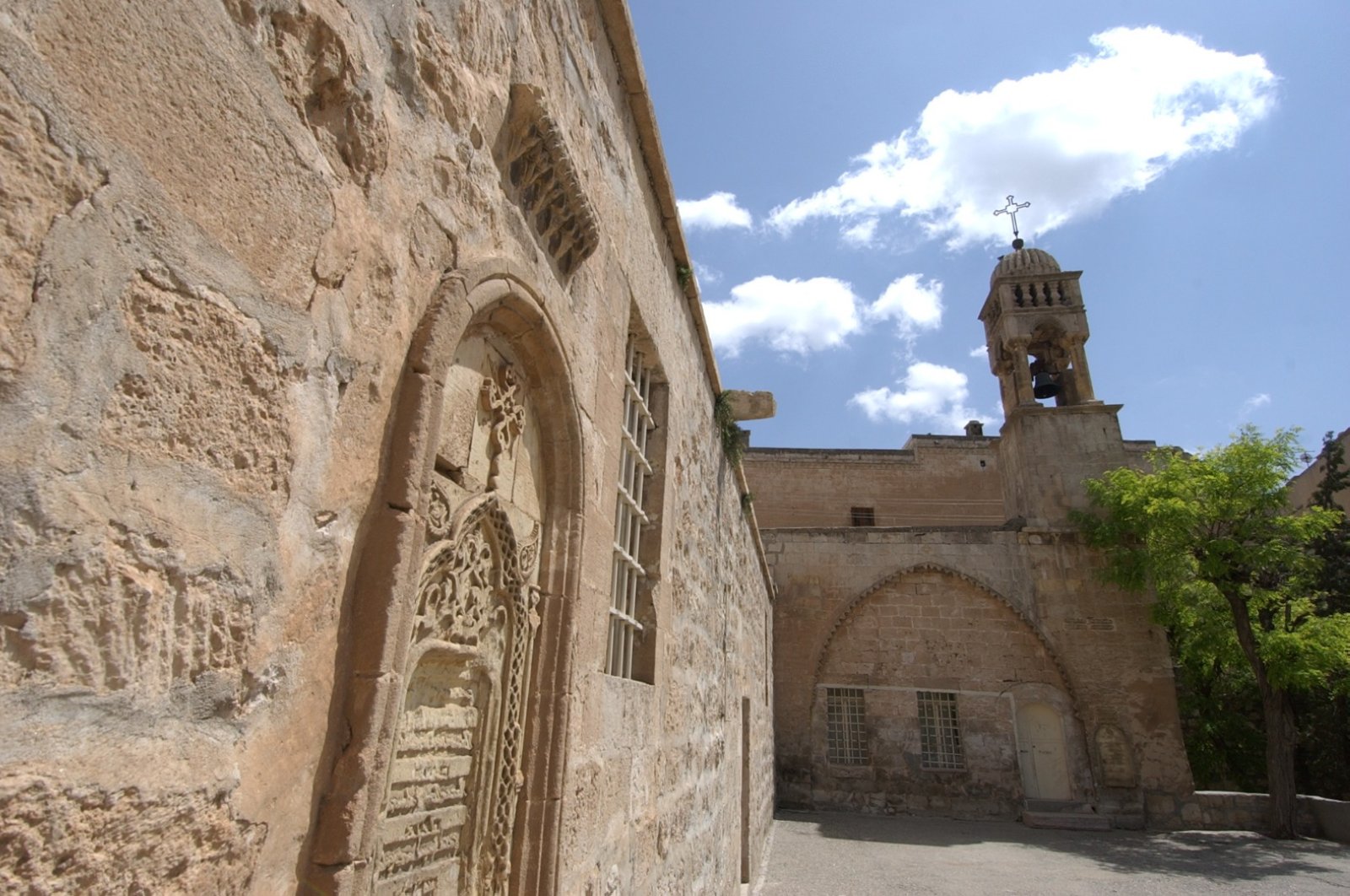 The historic Kırklar Church was unusually empty on Easter Sunday as the faithful followed guidelines to stem the spread of the coronavirus, Mardin, Turkey, April 19, 2020. (DHA Photo)
by DAILY SABAH Apr 19, 2020 6:35 pm
RECOMMENDED

Most Orthodox Christians in Turkey celebrated Easter at home this year, as services were streamed live on social media by the few faithful who performed the rites at churches across the country.

In southeastern Mardin province, only a few Syriac Orthodox Christians gathered in the fourth-century Kırklar Church on Sunday, in line with measures to stem the spread of the coronavirus. Those who gathered prayed for an immediate end to the deadly pandemic.

The Deyrülzafaran Monastery located just outside the city of Mardin also held Easter rituals with a limited number of people under the supervision of Saliba Özmen, the metropolitan bishop of Mardin and Diyarbakır.

Assyrian leaders in the city of Mardin decided last month to indefinitely suspend all visits to churches and monasteries and to halt Sunday rituals.

However, an exception was made for Easter Sunday, the most important holiday of the year for Orthodox Christians. At Kırklar Church, Archbishop Gabriel Akyüz led the rituals on Sunday, reading chapters from the Bible and leading chants in Turkish, Arabic, Hebrew and Syriac.

The service was broadcast live on social media, allowing the faithful to watch from their homes.

Akyüz told an Anadolu Agency (AA) reporter Sunday that while the church usually overflows with people on Easter Sunday, this year, only a few were able to participate in person. The rituals were held in accordance with the guidelines to combat the virus, he noted.

"Today, the virus epidemic affecting the whole world has imprisoned everyone at home. We hope that the epidemic will come to an end all over the world, especially in our country, in our region, in our city,” Akyüz said.

"Our task is to pray. We pray for the end of the epidemic," he said.

Remarking that holidays of all the religions in the multiethnic city of Mardin are normally celebrated together, Akyüz expressed his disappointment that others could not join the Orthodox community in celebrating this Easter.

However, he thanked Mardin Gov. Mustafa Yaman for sending flowers to the church and the Muslims who called to express good wishes.

Orthodox communities in Turkey have been supportive of government measures to combat the novel coronavirus and aid those affected by it.

At the beginning of the month, Fener Greek Orthodox Patriarchate announced a TL 300,000 donation (around $45,000) to the “We are Self-Sufficient” campaign launched by the Turkish Presidency, while the foundation which runs Syriac churches donated TL 100,000. The campaign aims to provide additional support to low-income workers who are suffering financially due to measures taken against the spread of the virus.

More than 260 million Orthodox Christians around the world celebrated Easter Sunday. While churches in most countries were closed or held very limited services, some churches in Belarus, Bulgaria and Georgia sidestepped virus fears to keep their doors open.

Orthodox Christians, the world's third largest group of Christian believers, this year celebrate Easter a week after Catholics and Protestants because they follow a different calendar.