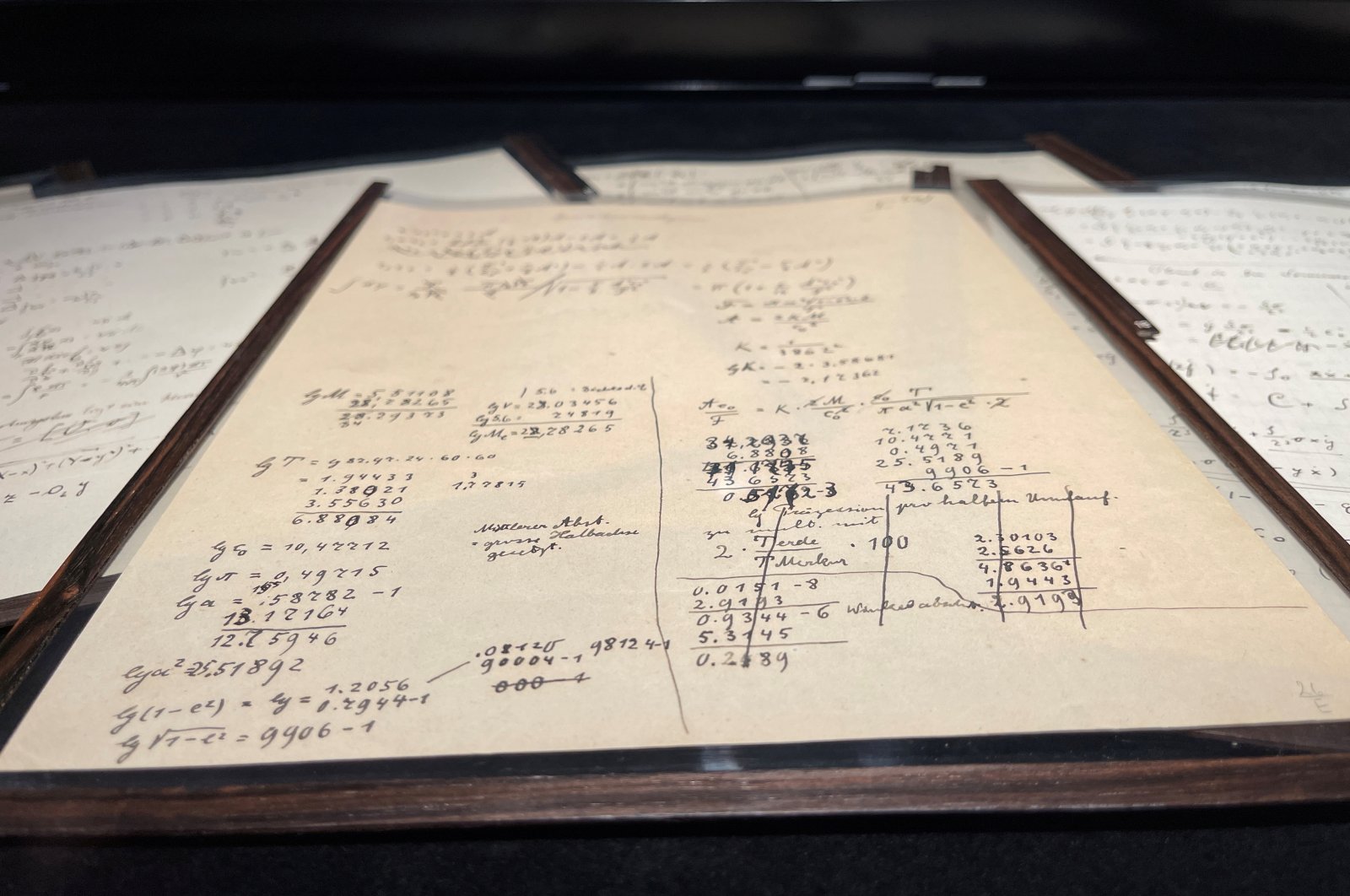 A page of the Einstein-Besso manuscript, a 54-page working manuscript written jointly by Albert Einstein and Michele Besso between June 1913 and early 1914, is displayed at Christie's auction house in Paris, France, Nov. 22, 2021. (Reuters Photo)
by French Press Agency - AFP Nov 24, 2021 10:24 am
RECOMMENDED

Albert Einstein's handwritten notes for the theory of relativity were sold for a record 11.6 million euros ($13 million) at an auction in Paris on Tuesday.

The manuscript had been valued at around a quarter of the final sum, which is by far the highest ever paid for anything written by the genius scientist.

It contains preparatory work for the physicist's signature achievement, the theory of general relativity, which he published in 1915.

Calling the notes "without a doubt the most valuable Einstein manuscript ever to come to auction," Christie's – which handled the sale on behalf of the Aguttes auction house – had estimated prior to the auction that it would fetch 2 million to 3 million euros.

The 54-page document sold on Tuesday was handwritten in 1913 and 1914 in Zurich, Switzerland, by Einstein and his colleague and confidant, Swiss engineer Michele Besso.

Christie's said it was thanks to Besso that the manuscript was preserved for posterity.

This was "almost like a miracle" since the German-born genius himself would have been unlikely to hold on to what he considered to be a simple working document, Christie's said.

Today, the paper offers "a fascinating plunge into the mind of the 20th century's greatest scientist," it said.

Einstein died in 1955 aged 76, lauded as one of the greatest theoretical physicists of all time.

His theories of relativity revolutionized his field by introducing new ways of looking at the movement of objects in space and time.

In 1913, Besso and Einstein "attacked one of the problems that had been troubling the scientific community for decades: the anomaly of the planet Mercury's orbit," Christie's said.

This initial manuscript contains "a certain number of unnoticed errors," it added.

Once Einstein spotted them, he let the paper drop, and it was taken away by Besso.

"Scientific documents by Einstein in this period, and before 1919 generally, are extremely rare," Christie's added.

"Being one of only two working manuscripts documenting the genesis of the theory of general relativity that we know about, it is an extraordinary witness to Einstein's work."

Einstein also made major contributions to quantum mechanics theory and won the Nobel physics prize in 1921.

He also became a pop culture icon thanks to his dry witticisms, and trademark unruly hair, moustache and bushy eyebrows.