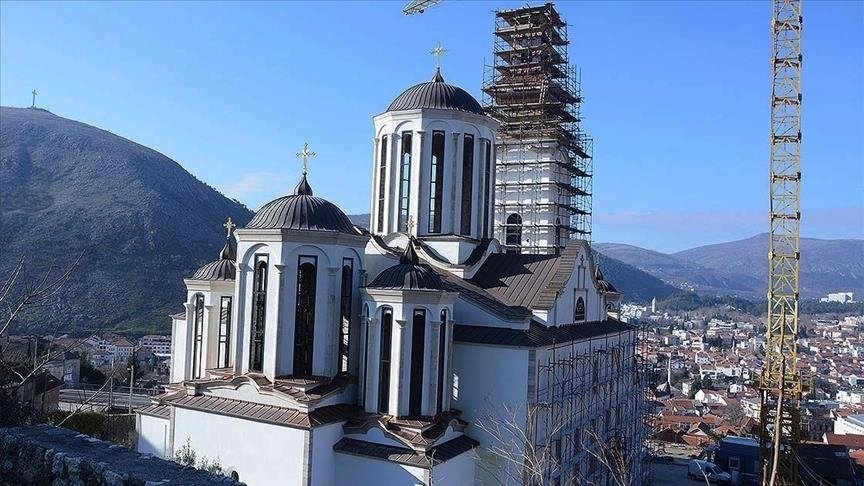 The Cathedral of the Holy Trinity, a historical Serbian Orthodox church located in the Bjelusine neighborhood in the center of Mostar in Bosnia-Herzegovina, has become a symbol of interfaith tolerance 25 years after the end of the Bosnian War.

As restoration work on the Cathedral of the Holy Trinity neared its end, it received a special gift from adherents of three different faiths, namely a Muslim Bosnian, a Catholic Croat and an Orthodox Serb, demonstrating that interfaith tolerance is still alive in the city.

The three diverse friends, who asked to remain anonymous, donated three large clocks they requested be placed on the three sides of the church tower. Each of the clocks features different numerals, Arabic, Roman and Slavic, to symbolize each faith in harmony.

Mostar Archpriest Dusko Kojic told Anadolu Agency (AA) that philanthropists who donated the clocks are three good friends from different religions, and it is actually a very nice message that they do not want to be revealed.

"This actually proves that Bosnia-Herzegovina is a country where people can love each other and live in peace," said Kojic.

The Church of the Holy Trinity was the largest church in the Balkans when it was built and was also financially supported by Sultan Abdulaziz, the 32nd sultan of the Ottoman Empire who reigned between 1861 and 1876. The cathedral served as the seat of the Eparchy, the ecclesiastical district under the jurisdiction of a bishop, of Zahumlje and Herzegovina from 1873 until its destruction.

Historian Semsudin Zlatko Serdarevic said the land on which the church was built was donated by Omar Lütfi Pasha (1806-1871), an Ottoman field marshal and governor of the time, who was born to Serbian Orthodox Christian parents and later converted to Islam.

Serdarevic stated that similar instances of religious tolerance, peace and unity had happened between the years of 1863 and 1873 when the church was first constructed. "The culture of coexistence that has lasted for centuries continues today. People living in Bosnia-Herzegovina, celebrate holidays together even if their beliefs are different," he said.

Serdarevic said that the Assembly of Mostar Islamic Union also provided financial assistance to restore the Holy Trinity Church, which is on UNESCO's World Heritage List along with the historical city of Mostar.

Mostar, where a small number of Orthodox Serbs currently live, saw difficult times during the war with intense clashes between Bosnian and Croatian forces. The church suffered as well and was almost completely destroyed during the war between 1992 and 1995. Restoration work at the church began in 2010.