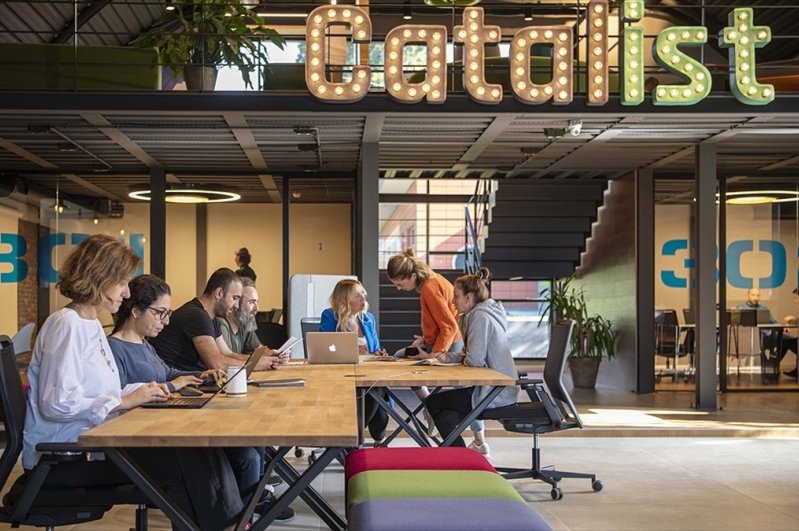 The SabancıDx Digital Campus project was born out of the cooperation between the private sector, academies and start-ups. (AA Photo)
by Şule Güner Feb 25, 2020 3:50 pm

SabancıDx aims to show the world that gone are the days when Silicon Valley was the be-all and end-all of tech hubs, and with innovative digital centers and the right vision, Turkey, too, could make its mark on the scene

Sabancı Holding established a new generation company in 2018: SabancıDx. A world apart from what we call a "traditional company," SabancıDx is Turkey's first digital campus. It's an establishment that would act like a startup, technopark academy and a catalyst center. The campus, located on the Asian side of Istanbul, brought to life the very concept of "digitalization."

The concept of a digital campus is new to us, which leaves many of us wondering how this campus will operate and how well it will respond to all the needs of being a multi-role tech center.

SabancıDx's General Manager Burak Aydın is one of the most valuable names in the industry and is aware of the startup ecosystem in Turkey and where the world is headed.

“I think the most visionary name to walk this Earth after Steve Jobs is Elon Musk. He teaches the world to have courage, to discover, to dream, to use technology and apply physics. He has taught the whole world that a space shuttle can land upright just the way it takes off. This is the rule of physics,” Aydın said.

“Elon Musk discovers (the unknown) using his imagination. That's why he is considering building a base on Mars. Our reason for creating the SabancıDx campus is very similar. Here we put forward this hypothesis: Will the campus environment, currently in use in the U.S., work in Turkey as well? A campus basically means an ecosystem. We, as the SabancıDx campus and technology company, bring together universities, startups and group companies. We need to think about what will happen in the future and create values within this ecosystem,” he said, explaining the need for digital campuses in the country.

When I asked Aydın to give some more concrete examples of the advanced technologies that would form this ecosystem, he pointed to blockchain.

“Blockchain technology is new, but its products have not arrived yet. There is also a rising tide in the field of cybersecurity. The fields of application of cybersecurity within the industry and automation sector have not been brought up, but we are talking about dark factories (lights-out manufacturing), and in fact, protecting dark factories against cyberattacks is a very virgin field,” he continued. “Or, for example, we all have a lot of personal information scattered across many areas. How will we protect all of this information when 5G tech arrives, and this is multiplied by five, 10 or even 100? Another area to be explored is artificial intelligence (AI) and where it comes from. There are lots of fields to discover about AI and so is the industrial IoT (Internet of Things).”

Tech's place in our lives

Regardless of which technological developments await us in the next few years, Aydın notes that it is very difficult to predict the future with 100 percent accuracy, adding that it is a fact that the many things that await us will create a "positive disruption effect."

“Electric-powered engines and diesel engines are very different structure-wise. The electric engine does not fail. If broken, it is not fixed but replaced directly. A computer drives the autonomous car. A car driven by a computer is much less likely to crash than a car driven by a human. So, in such a situation, will there be an insurance sector like today? There probably won't be. Therefore, the game will be rewritten in this ecosystem."

There are also some discussions going on as to whether all these developments will benefit humans. How will people get used to all of these innovations? Will all advanced technologies benefit us? In answering these questions, Aydın blends his own optimism and the Japanese concept of human-centric Society 5.0. “The Japanese have handled this issue very well. In short, they say industrialization, AI, robots and automation entered our lives with Industry 4.0. But how will society evolve while the industry evolves like this? How will society find solutions to their own problems? What problems will have solutions? For example, there is an aging population; what will it do about old age? How will technology be used for human and society; how should it be used? What about ethical values? What about regulations? They say these issues need to be discussed and a concept needs to be derived.

Next in line will be Human 6.0. How will the person, an individual of the society it lives in, add value to it, and how will it survive? What is technology's place in all of this, and in how much will it take part? So, should it all be just technology, 100%? No, we have to draw the line somewhere. I think people will define the place of technology in their own lives in the upcoming period. I am optimistic about this process. Starting from society, man will establish norms for this science. Since we are in a transitional period, we have not yet come to the stage of defining norms. Actually, with the Personal Data Protection Law (KVKK) and technology, certain needs of people emerged. New norms and new laws will secure the new needs that arise from the collective needs of society."

Having had the opportunity to get to know many international companies and discover and understand the Turkish startup ecosystem throughout his career, Aydın says he opposes the understanding that “innovation only comes from Silicon Valley in the U.S.”

Under this view, he points to "democratization," one of the most popular digital concepts of 2019 caused by the relationship between data and information. “Innovation will be everywhere that can take information and transform it into value. Therefore, our aim at this campus is to have such a climate that there will be enough sunlight, water, moisture in the air so that sprouts can bloom,” he continued.

“Therefore, as SabancıDx, we want to work with group companies, non-group companies, startups and universities with a value-oriented approach. That's why we have called ourselves SabancıDx rather than Sabancı Digital. Because the term digital is jargon, and it is temporary. But when you say ‘Transformation X’ or ‘Multiplier X,’ that ‘X’ represents the unknown in mathematics. We will pursue the unknown here. For example, today's unknown is blockchain, industrial IoT, AI or cybersecurity. But tomorrow, these will change. Representing that unknown ‘X,’ will be quantum computers or other technologies we are not even aware of.”

Working less, but to what extent?

Aydın says: “We are heading toward a fun, different world. Futurists argue that between 2030 and 2050, we are going toward a direction where we will definitely have less work and more leisure time.”

“They say that we will work 20 hours a week when we reach the 2050s, we will have more free time for our hobbies and ourselves, and we will have time for world affairs and to do good. We could even bring (our working) time to less than 20 hours, but experts say this could cause unrest in society sociologically and psychologically. Humans have to be busy.”

“Today's world has taught us that startups are very successful. The reason why startups are successful is that they bring out innovations. They reach billions of dollars very quickly. They make quick decisions and implement them quickly. These are actually the fruits of agile systems Industry 4.0 has been talking about constantly. All big companies should quickly embrace the startup mentality. If they cannot, they are doomed to fail.”

"If we can recruit Turkish engineers in this ecosystem in the right environment and in the right climate, we can provide products and services to the world,” Aydın added.