6 decades of space missions to Mars - a timeline 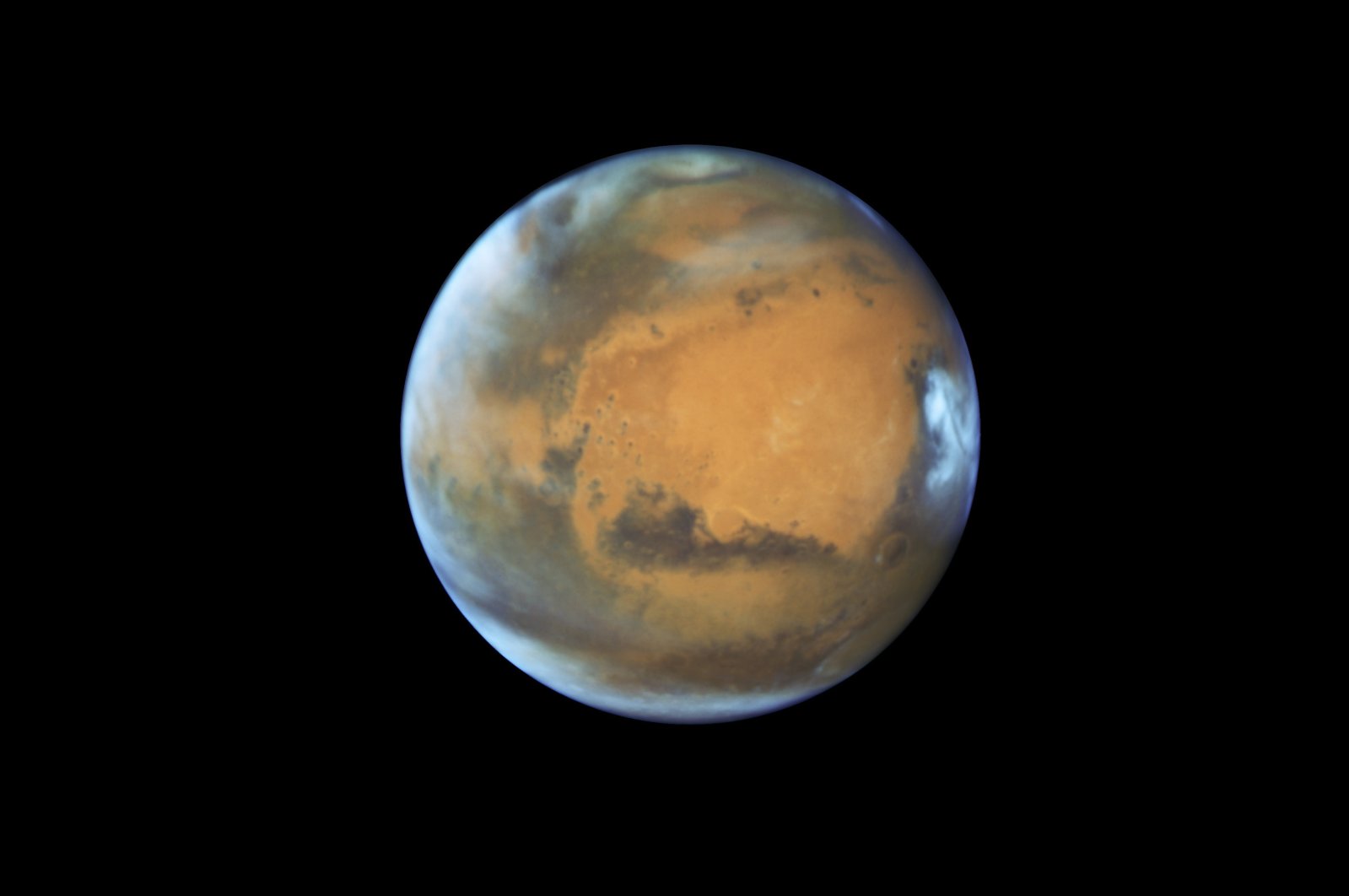 The six-decade space race to explore Mars has produced about 40 missions, at least half of which have been successful, yet the Red Planet still inspires new adventures as humanity seeks to find signs of life on a planet other than Earth

Mars is the talk of the town at the moment. We are seeing countries sending probes after probes, going on missions into deep space to get a closer look at the Red Planet. The latest announcements were of a triple Mars 2020 mission, though to be conducted separately, by the United Arab Emirates (UAE), China and the U.S.

The latest launch of a rover came last week when U.S. space agency, NASA, launched Perseverance and its Ingenuity helicopter, which will land on the planet in next February.

Since the 50s, the U.S. and the Soviet Union remain the only two countries in the world to have successfully landed a spacecraft on Mars. Meanwhile, the European Space Agency (ESA) and India have also sent spacecraft to enter Mars' orbit.

Without further ado, here is a look back at some key missions over the last 60 years:

The Soviet Union leads the way in space missions, sending probes from 1960, just three years after it launched its first artificial satellite Sputnik I. But it clocks up a string of failures, including Marsnik 1 and 2, the first two probes launched in October 1960, which do not reach the Earth's orbit.

Zond 2 launched in 1964 is the first probe to get close to Mars, although it does not manage to carry out an observation of the planet.

On July 15, 1965, U.S. vessel Mariner 4 makes history when it became the first to fly by Mars. It sent back about 20 photographs revealing a desert-like surface dotted with craters.

Mariners 6 and 7 followed in 1969 and sent similar cratered photos; however, it was soon learned they had coincidentally flown over similar areas, and the planet was not like the Moon, with patches of relatively flat land as well.

Mariner 9 in November 1971 becomes the first satellite in history to travel around Mars, providing a detailed photographic map showing traces of volcanism and river erosion.

In December, the Soviet Mars 3 is the first spaceship to make a soft-landing on the planet but it stops transmitting some 20 seconds later.

The U.S. becomes the first nation to make vessels function on Mars. In July 1976, Viking 1 becomes the first spaceship to successfully land on the planet and complete its mission. Viking 2 follows in its footsteps in September that year.

Their combined missions allow them to collect more than 50,000 photographs and show there was, to scientists’ dismay, no sign of life on Mars.

In the 80s, two attempts were made by the Soviet Union to reach one of the moons of Mars, Phobos, but both missions failed.

Exploration to the Red Planet picks up again in the 1990s, but produces mixed results: seven probes are lost. But NASA enjoys two successes, both in 1997.

In July, Mars Pathfinder places the robotic rover Sojourner on the planet. Then in September Mars Global Surveyor (MGS), launched a year earlier, enters orbit and goes on to study the entire surface, atmosphere, and interior of the planet. MGS also manages to recapture the famous "face on Mars," which conspiracy theorists thought was left behind an alien civilization, though images later revealed that it was a trick of light and just an illusion.

Both Pathfinder and Surveyor also collected detailed data and detect the presence of minerals.

The European Space Agency (ESA) sends the probe Mars Express/Beagle 2, which circles the planet from December 2003 and remains in operation. But the craft's mini-lander Beagle 2 never shows sign of life, though it was seen on the planet's surface in January 2015.

Two U.S. geological robots, Spirit and Opportunity, are placed on Mars in January 2004 for a successful mission lasting until 2010 and 2018, respectively.

Opportunity clocks up the longest extraterrestrial distance ever traveled at 45 kilometers (28 miles) and sends back more than 200,000 images, and discovers traces of humidity in the atmosphere.

Three years later on Aug. 4, 2007, NASA launches Mars Phoenix, and about a year later it finds water ice beneath the surface, sparking a renaissance in space exploration.

The U.S. robot Curiosity lands in August 2012 and is the only vehicle still in operation on Mars. It has shown the planet was once suitable for microbial life and should be potentially habitable. From previously water-soaked areas and organic compounds to detecting methane on the surface, Curiosity reignites hope.

In May 2008, Phoenix, another U.S. space vehicle, investigates permafrost on Mars and confirms the presence of frozen water.

India successfully puts a probe into orbit in September 2014. The Mars Orbiter Mission (MOM) aims to measure the presence of methane on the Red Planet and was produced at a low cost and in record time. It stands at enough distance to see the entire planet and has sent many images back to Earth.

The Russian-European mission ExoMars due to send a robot to drill the ground on Mars in 2020 gets postponed to 2022 following technical difficulties and the coronavirus pandemic.

But three other Red Planet missions have taken place in July. The United Arab Emirates on July 20 launched its Hope probe to Mars, becoming the first interplanetary mission from the Arab world. Three days later China launched its rover to Mars as part of the mission Tianwen-1. And last Thursday, NASA's Perseverance launched from Cape Canaveral, Florida onboard a United Launch Alliance Atlas V rocket.

Although Turkey has not yet managed to send a mission to Mars or space per se, the Turks' interest in space and extraterrestrial life is not little, by any means. In the past year, 2.5 million Turks signed up to add their names to a silicon chip that will travel under a glass plate aboard the Perseverance rover as part of NASA's "Send Your Name to Mars" campaign. Out of 8 million that signed up worldwide, Turks still rank first with the number of applications, followed by India.

Recently, NASA also grabbed the attention of Turks with an interesting fact it shared on its Twitter account.

NASA's Earth Observatory said last week that scientists had been closely studying a location on planet Earth to prepare for and anticipate conditions on Mars in their latest mission to search for life on the barren planet. To the surprise of Turks, this place was no other than Lake Salda, often dubbed as Turkey's Maldives.

With NASA's Perseverance rover set to begin a one-year space mission (the equivalent of 687 Earth days), the 28-mile wide Jezero Crater on Mars came to the forefront once again as the planned landing site for the vessel. And when the agency said it thought the depression was home to a large lake – and perhaps microbial life – interest quickly grew.

Salda came into play exactly here, as the mineral makeup of both places was very similar in the geological sense.

Candan Gökçeoğlu, a professor of geological engineering at Hacettepe University in Turkey's capital Ankara, believes that samples collected by the spacecraft will help humanity establish whether there is really any activity of primitive lifeforms and give us a better understanding of the universe's timeline.

Gökçeoğlu, who is also a member of Turkey's Environmental and Natural Assets Science Board, said the similarities were between a kind of sediment formed by algae, which are crucial microorganisms that create suitable atmospheric conditions to sustain life, at Lake Salda and minerals detected in dry Martian lakebed on Jezero.

NASA is trying to understand if Mars is now similar to the way Earth was 3.5 billion years ago, Gökçeoğlu said, adding that he expects Salda's popularity to rocket in mid-2022 after the research is conducted by NASA's Perseverance rover.

"If it is truly mineralogically similar, then human beings will be able to say, 'Now, Mars is 3.5 billion years younger than Earth, it's on its way to becoming a planet like Earth," he told Anadolu Agency (AA).

Some Turkish scientists have also collaborated with international teams working on space projects or even provided consultations.

One of the names that stand out is architect Saadet Yüncü. The young architect from Turkey's northwestern Tekirdağ province became the first Turk to take part in projects on building structures on Mars. Yüncü joined the research and design workshops held by the U.K.'s Architectural Association (AA) School of Architecture, considered the most comprehensive international architecture school in the world, to brainstorm ideas to create sound structures on the Red Planet. Working with many other international names, she carried out studies in Jordan's Wadi Rum Desert to see what materials would be best and most durable in space and what techniques could be used to build structures.

Another name from the science world is professor Umut Yıldız, a Turkish scientist working at NASA. Yıldız has previously worked on the Parker Solar Probe, the first-ever mission to "touch" the Sun and continues to carry out work for NASA’s Mars missions.

Yıldız made headlines a year ago when he gave an "expiration date" for Earth, which won’t be for another 5 billion years – though only if humanity doesn’t end life as we know it sooner, he had painfully joked.

He had also given interesting information about NASA’s Mars mission, saying that if the current mission failed to launch it would have to wait another 26 months for when Earth and Mars became closer together, stressing the importance of catching that short window of opportunity. To make matters harder, he said the spacecraft would accommodate only four people and the flight there would last at least six months.

"So, that’s why you can’t go to Mars whenever you want to or return. If you want to go you need to (be prepared to) spend three years with three other people," he had said.

On the topic of Turkey’s first domestic space agency, Yıldız said it was a promising and exciting development that would hopefully spur more and more interest in the area, helping Turkey solidify its place in the space race in the coming decades.