A day on Venus lasts longer than a year on the planet: Study 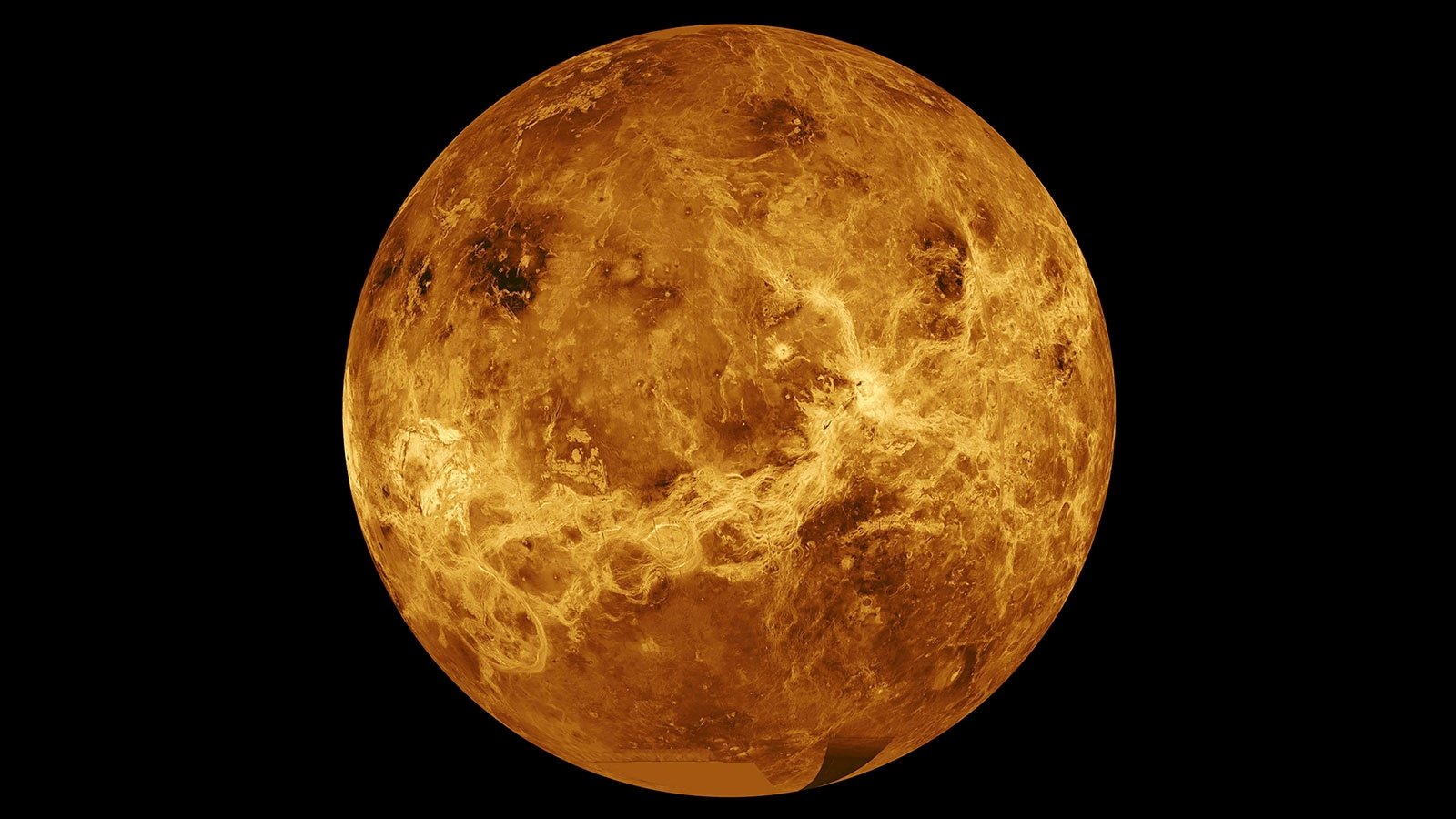 Data from NASA's Magellan spacecraft and Pioneer Venus Orbiter is used in an undated composite image of the planet Venus. (NASA via Reuters)
by Reuters May 04, 2021 7:32 pm
RECOMMENDED

A new study has precisely calculated the duration of a day on Earth's closest neighboring planet, Venus, using radio waves, which allowed scientists to analyze other aspects of the cloudy, mysterious planet.

It was already known that Venus has the longest day, the time the planet takes for a single rotation on its axis, of any planet in our solar system, though there were discrepancies among previous estimates.

The study found that a single Venusian rotation takes 243.0226 Earth days. As it takes Venus 225 Earth days to make a complete orbit around the sun, which means a day lasts longer than a year on Venus.

The study also measured the tilt of the Venusian axis and size of the planet's core, allowing for a deeper understanding of an enigmatic world sometimes affectionately referred to as Earth's "evil twin."

The researchers transmitted radio waves toward Venus, 21 times from 2006 to 2020, from NASA's Goldstone Antenna in the Mojave Desert of California and studied the radio-echo at Goldstone and at the Green Bank Observatory in West Virginia, which provided information on certain planetary traits.

"Each individual measurement was obtained by treating Venus as a giant disco ball. We illuminated Venus with a giant flashlight, the radar at Goldstone, and observed the reflections as they swept over the surface of the Earth," said the University of California, Los Angeles (UCLA) planetary astronomy professor Jean-Luc Margot, who led the study published in the Nature Astronomy journal.

"Venus is an amazing laboratory for understanding planet formation and evolution, and it's a stone's throw away. There are likely billions of Venus-like planets in the galaxy," Margot added.

The new data showed that the Venusian planetary core has a diameter of about 7,000 kilometers (4,360 miles), which is comparable to Earth's core. Previous Venus core estimates had been based on computer modeling rather than observational data.

Its core is almost certainly composed of iron and nickel, though it is unclear whether it is solid or molten, Margot said.

Venus spins on its axis almost upright, meaning it lacks discernable seasons, while Earth has more of a tilt. The study calculated the Venusian tilt at about 2.64 degrees. Earth's is about 23.5 degrees.

Venus, the second planet from the sun, is similar in structure but slightly smaller than Earth, with a diameter of about 12,000 kilometers (7,500 miles).

Above its foreboding landscape is a thick and toxic atmosphere that consists primarily of carbon dioxide, with clouds of sulfuric acid droplets. With a runaway greenhouse effect, its surface temperatures reach 471 degrees Celsius (880 degrees Fahrenheit), hot enough to melt lead.

Venus spins from east to west, the opposite direction from all other planets in our solar system but Uranus. In another quirk, its day-night cycle, the time between sunrises as opposed to the length of a single axial spin, takes 117 Earth days because Venus rotates in the direction opposite of its orbital path around the sun.

"I don't think that Venus would be more difficult to understand than other planets if we had adequate data, but there is a deplorable scarcity of data about Venus," Margot said.

"There have been no NASA missions to Venus in almost 30 years and about a dozen NASA missions to Mars in this time interval," Margot said, adding that the new findings on how Venus spins could help any future landing attempts.