A star is born: Fantastic images of ‘neighboring’ galaxies 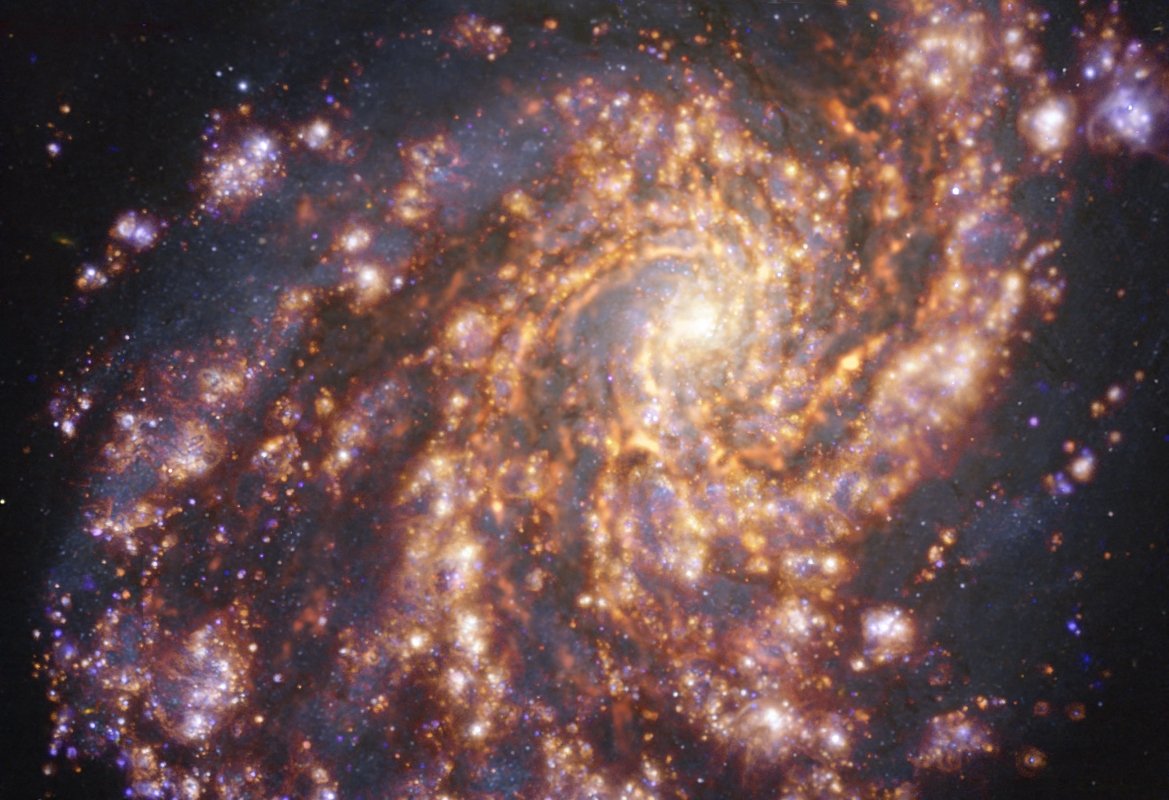 This image made available by the European Southern Observatory on July 16, 2021, and taken as part of the Physics at High Angular resolution in Nearby GalaxieS (PHANGS) project, which is making high-resolution observations of nearby galaxies with telescopes operating across the electromagnetic spectrum, shows the nearby galaxy NGC 4254, obtained by combining observations taken with the Multi-Unit Spectroscopic Explorer (MUSE) on the ESO Very Large Telescope and with the Atacama Large Millimeter/submillimeter Array (ALMA), in which ESO is a partner. (Photo by Handout / European Southern Observatory via AFP)
by French Press Agency - AFP Jul 19, 2021 1:01 pm
RECOMMENDED

The process of how stars are born has been long wondered about by scientists across the world and is one of the biggest mysteries in the modern world.

Imagine multi-colored pinwheel fireworks, but on a galactic scale.

That is exactly what images of baby stars that European astronomers released Friday look like.

Taken from nearby galaxies by the European Southern Observatory's (ESO) Very Large Telescope, images of the swirls of light have allowed astronomers to pinpoint the locations of young stars with new precision, along with the warming gas crucial to their formation.

Scientists have long known that stars are born in clouds of gas, but what exactly triggers star formation – and how galaxies as a whole fit into the picture – remains largely unknown.

"For the first time, we are resolving individual units of star formation over a wide range of locations and environments in a sample that well represents different types of galaxies," said Eric Emsellem, an ESO astronomer.

"We can directly observe the gas that gives birth to stars, we see the young stars themselves, and we witness their evolution through various phases."

Emsellem and his team used the Multi-Unit Spectroscopic Explorer (MUSE) in conjunction with ESO's Very Large Telescope in Chile's Atacama Desert to trace the newborn stars as they illuminate and heat up surrounding gases.

By combining MUSE images with data from an array of 66 radio telescopes, also in the Chilean desert, astronomers will gain insights into the stellar nurseries of our neighboring galaxies.

"There are many mysteries we want to unravel," Kathryn Kreckel from the University of Heidelberg, said in a statement.

"Are stars more often born in specific regions of their host galaxies? If so, why? And after stars are born, how does their evolution influence the formation of new generations of stars?"

The news images – from 19 galaxies some five to 60 million light years from Earth – will help answer these questions, she said.

MUSE collects spectra – like "bar codes" that allow astronomers to unveil the properties and nature of cosmic objects – at every single location within its field of view, thus providing much richer information than traditional instruments.

The ESO is an intergovernmental astronomy organization in Europe and the world's most productive ground-based astronomical observatory.