An explorer's journal: A month at the South Pole – Chapter 3 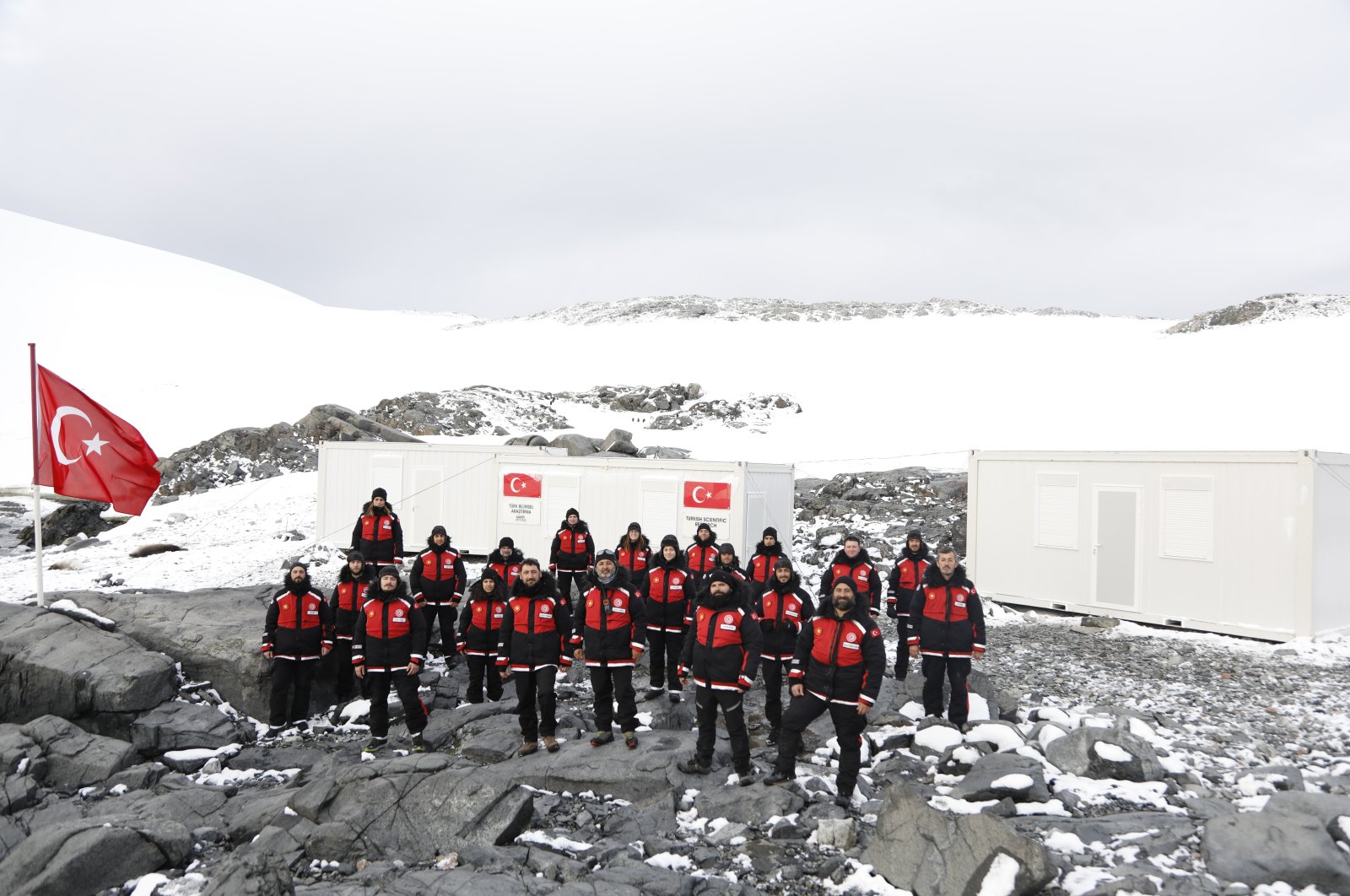 The third part of our "Antarctic Diaries" series focuses on a rather peculiar museum and the names leading research efforts, as well as a few unbelievable phenomena that can only be seen on the vast, icy lands in this part of the world

Almost overturned by the waves...

Some of the scientists on Horseshoe Island were conducting their studies within the area where ​​Turkey's temporary base was located while some worked on the other side of the island. In the middle of the second week, I wanted to cross over to the other side to talk to the scientists working there. Divided into two boats in the early hours of the morning, the crew left the ship in half-hour intervals. I was on the first boat. Approaching the shore in boats is tricky and a big problem every single time. Both the glaciers and the rocks that extend along the shore prevent the boats from getting close. A new challenge was added to these today: high waves. Our first two attempts to go ashore were prevented by the high and violent waves. On our third attempt, only three people at the front of the boat managed to get off. I stayed in the boat with six people. Those who got off the boat were soon drenched by the waves as they tried to cross the rocks. While this was happening, we were getting tossed around (like salad) in that boat. For a brief moment, the boat was about to capsize. Benjamin Aguirre Araos, the ship's second captain, was guiding the boat. He quickly asked us to crouch down on the spot. By ducking, we had escaped this danger, it seemed. Afterward, we managed to go ashore by moving to another region, which was a bit farther but we thought would be safer.

The museum at the end of the world

One of the most interesting museums in the world is on this side of Horseshoe Island. Just think, in a place where there are no humans on hundreds of square kilometers of land, there is a museum. It belongs to the British. It is actually one of the U.K.'s science bases. Called Base Y, it was founded in 1955 and used for different purposes until 1960. Though it remained closed for a while, the base was opened for four months in 1969 but was eventually shut down again. Later on, it was turned into a museum. Base Y, preserved as-is from when it was used as a base, is kept open all the time now. Everyone who comes in signs the guest book. Upon entrance and exit, you are obliged to follow the rules listed on the door. The museum is completely dark. When you go in, you have to leave your backpack outside.

Up to 10 people can visit the museum at the same time via the assistance of a torch or a mobile phone flashlight. Food and other consumer goods from the 1950s sit on the shelves, the same way they did back in the day. There is an abundance of magazines from the same periods also. There is even a cookbook on the table in the museum's kitchen. On the book's cover a penguin, cut in half with a knife, is depicted. When we open up the book, we see many recipes with penguin meat as well as information on how to cut up seal meat – all of which are forbidden now. Happy that the hunting of penguins and seals are now banned, we continue to tour the museum. The weather station looks as if it would work with the press of a button. Two pictures on the wall draw our attention. The room, we learn, was also used as a dormitory and perhaps also used as a common living area. A signed photo of Queen Elizabeth II from the 1950s is hung on the wall. Next to it is a portrait of Mozart. Depressing tools, such as saws used to cut seals, can be seen in the corridors. Outside the building, there are kennels for Huskies, which were used in Antarctica at the time. There are also two rowboats on the seashore.

A river at sea?

This area usually receives a lot of snowfall. It also rarely rains. Fifteen days after our initial journey, the sun finally shows its face, revealing many beauties hidden before our eyes. The reflections of the ice mountains on the sea have never looked so beautiful. Which one is the reflection and which one is real, it is really hard to distinguish. Thanks to no pollutants being in the air and the sea remaining as clean as possible, we can enjoy this beauty. I can't help but get lost in the sounds of nature I hear by the seashore. Sounds of waves come from the sea. Then the sound of water flowing from a river accompanies those sounds. But there are no streams around, neither a river nor a creek. The sound is coming from the sea. Ice floes melting in the middle of the sea and on land create this natural flow, a river inside the iceberg. Hearing sounds of a river out at sea is a rare, natural phenomenon that few people experience.

There is no air pollution in Antarctica. This gives you the opportunity to see very long distances on sunny days. The downside to this is that you lose your sense of depth. So the places that seem very close to you can actually be very far away. Visibility on a clear day can reach almost 300 kilometers (186 miles). When we sat down and calculated the distance of the land pieces we had seen while on the ship or on the island via our maps, the whole team was amazed. We learned that the places we thought we could reach in a couple of hours on foot or by boat, we would not have been able to reach in two days by ship. It is a miraculous feeling to see with your eyes a faraway place that would take two days by ship. Our surprises did not end here. We unconsciously compare the things we see to other objects nearby to better understand their size, distance and proximity. Sometimes we measure the height of a mountain with the height of an apartment, for example. Or, when we estimate our distance to a faraway object, we base it on a closer object. Since there are no human-made objects in Antarctica, we have no chance of doing such comparisons. Therefore, the height of mountains can be shorter than we presumed and distances closer than expected.

Some claim air pollution doesn’t exist, but the impact on the continent from a world polluted by humans has attracted the attention of researchers. Academician Elif Seda Koçoğlu from Yıldız Technical University (YTÜ) came to Antarctica to research the topic. Pointing out that Antarctica is geographically isolated, Koçoğlu said many pollutants were detected in the region during previous studies. She stated that Turkey needs a strategy to monitor the levels of organic and inorganic pollutants within the scope of polar research. Koçoğlu said she collected a variety of samples, including soil, stones, ocean water and animal excrement from Horseshoe for the project. In the next stage, the research will be expanded to investigate the source of the pollutants to determine whether the rest of the world is polluting the continent.

During the journey to Antarctica, none of the creatures, including whales, ever posed a threat to humans. The only exception was the skuas. These birds, which look like seagulls but have brown coloring, constantly attacked our team to protect their nests situated between rocks on land. Warning us to steer clear of their homes by crowing loudly at first, the skuas often conducted intense aerial offensives that targeted our heads in an effort to scare us off. We also learned the skuas were responsible for the scattered seashells we found in the high hills and mountains. Limpets, the aquatic snails the birds often travel kilometers to the sea to collect, are one of their most important food sources.

The second-most common bird species we encountered on the continent was the northern tern or the Arctic tern. Though it may be surprising the southernmost bird in the world is associated with the North Pole, you haven't heard anything yet. This bird, with an average length of 30 centimeters (11.8 inches), flies at least 35,000 kilometers (18,600 miles) each year from the North Pole to the South Pole. According to research, some northern terns migrate an average of 90,000 kilometers annually. This is the longest known migration in the animal kingdom. Throughout their nearly 30-year lifespan, the northern tern travels over 2.4 million kilometers. This is the equivalent of traveling from Earth to the moon four times.

The next day I went to the other side of the island where our temporary base was located. My appointment today is with two important scientists. First up is associate professor Hakan Yavaşoğlu, a lecturer at the Geomatics Engineering Department at Istanbul Technical University (ITÜ) and deputy director of the Polar Research Institute at the Marmara Research Center (MAM) within the Scientific and Technological Research Council of Turkey (TUBITAK). In addition to his position as deputy leader of the expedition, he worked with Mahmut Oğuz Selbesoğlu to install two Global Navigation Satellite System (GNSS) stations. Explaining that the GNSS system is a revolutionary invention for geomatics, or in other words geodesy or Earth science, Yavaşoğlu said: "Much more than a global navigation system, this system proves beneficial in many areas ranging from climate change to atmospheric studies. In Antarctica, we will also follow the changes in the water, ice and snow levels, and particularly examining the troposphere and snow depth/thickness. We will introduce important data about Horseshoe Island and its surroundings to international literature with the stations we have established at two different points on the island.”

“I am also closely following all the other projects that I have been working on as part of my other duty, expedition assistant responsible for science. Despite the difficult conditions in Antarctica, thanks to the great efforts of our scientists and logistics team, all of the project stages encompassing studies on the white continent have been completed ahead of schedule. We see that the data obtained in the scientific studies conducted here are at a level that can be used in dozens of scientific publications. From here, many doctoral and master's dissertations will be produced and contribute greatly to Turkish literature in the field,” he said.

Mahmut Oğuz Selbesoğlu, a faculty member at YTÜ's Map Engineering Department and doctoral candidate, is the other name carrying out work with Yavaşoğlu as part of the project. After carrying out studies on the atmosphere at the Vienna University of Technology (TU Wien), Selbesoğlu returned to Turkey and came to Antarctica to establish a GNSS station. Within the scope of the project, he is conducting s series of scientific studies to help monitor global climate change, the most important environmental problem of today. Accordingly, he established a GNSS station in the Antarctic region to monitor the amount of water vapor in the troposphere, as well as changes in sea-level and levels of snow and ice. Data on climate change will be tracked through the two separate stations. In addition, a database regarding whether the energy needs of Turkey's permanent base can be met via energy from sea waves will also be created. Expressing that they can monitor the melting speed and size of the ice, Selbesoğlu said they will also make meteorological measurements and monitor the effects of greenhouse gases.