An explorer's journal: A month at the South Pole – Chapter 5 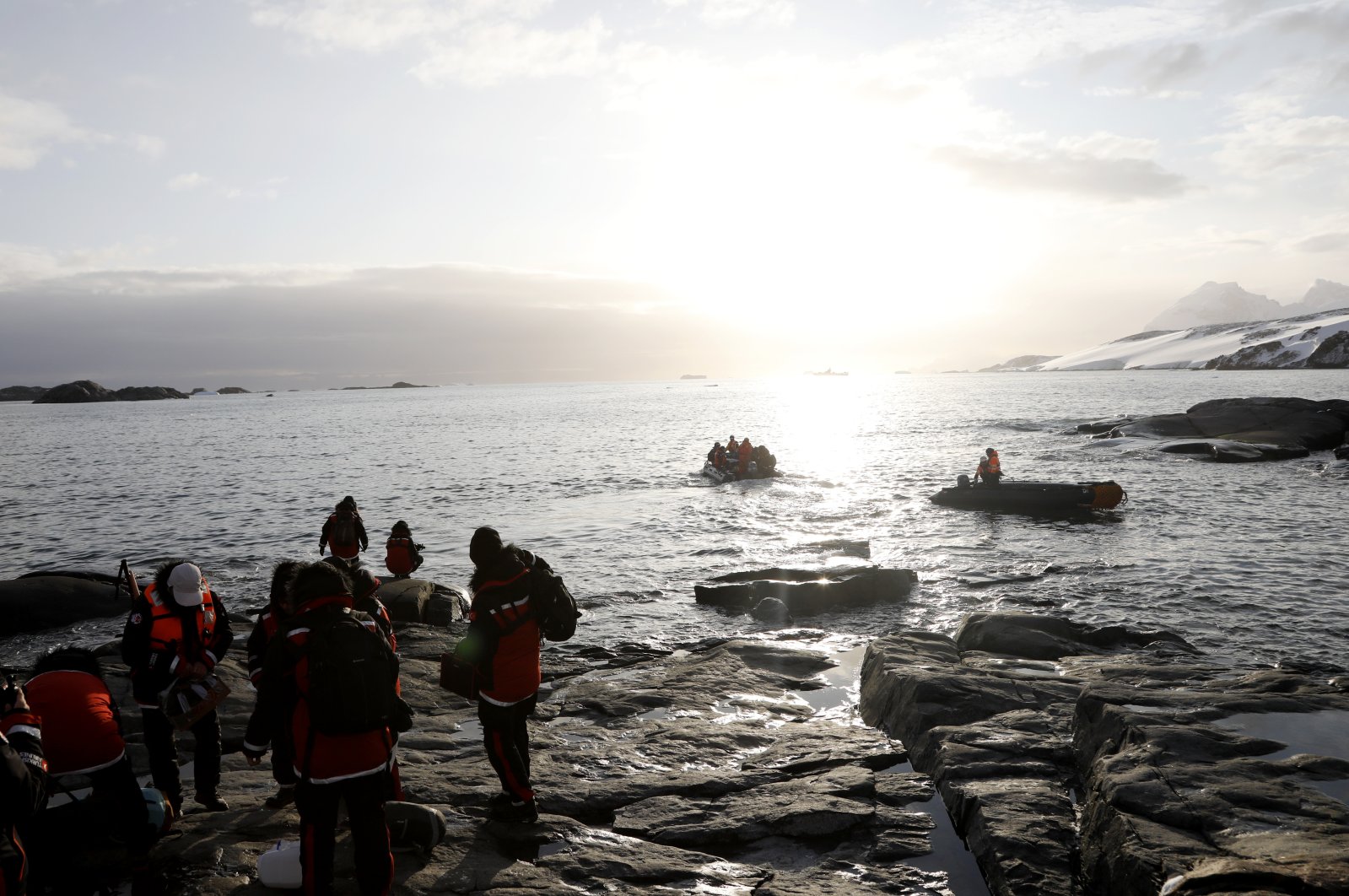 The final chapter of the Antarctic Diaries wraps up a month of adventures with penguins, seals and skuas as our narrator and the Turkish team are forced to make an early return from no man's land

Departing from the ship at noon, expedition leader professor Ersan Başar and I crossed over to Horseshoe Island where our temporary base was located. According to our plans, a team of seven would stay on the island that night. Our two primary goals were to photograph the sunset and sunrise. There was also a special request from Bulgaria. They wanted the expedition team to cook together and take photos of the meal we would eat altogether to use for the book they would publish later. With all scientific projects completed to a large extent and scientists putting their finishing touches on their work, managers of the expedition finally seemed a bit relieved. We started preparing for our return two days later. According to our plans, we would be going back to Turkey and collect samples on our way back. However, the volatile weather, which had become an inescapable part of our lives during the expedition and about which we were warned repeatedly about priorly, had put us in distress again. The news we received was very disheartening. Bad weather was coming. If we did not leave Horseshoe Island as soon as possible, our return journey would be delayed for at least a week.

Başar and his two assistants, Hakan Yavaşoğlu and Özgün Oktar, hurriedly returned to the ship. After a series of meetings with the ship's captain and meteorological assessments taken from Turkey and different parts of the world, the managing team returned to the island. It was a sad decision for all of us. We had to close down the base immediately and return to the ship. Later in the night, our return journey began with our first stop on Dismal Island. As I gathered our belongings from the base, I felt as if I was leaving my home where I had lived for years. I never imagined I could experience such a strong sense of belonging in such a short amount of time. We had shut down the base in a matter of a few hours. Though closing down a base in Antarctica does not mean it is all locked up. No building is chained or locked up on the continent, they are left open on purpose. In fact, emergency kits and food supplies are always available. The reasoning behind this is to help any (lost) person survive for at least a week.

As the expedition began to draw to a close, engineer Çetin Biçer from the Turkish General Directorate of Meteorology (MGM) noticed a technical problem in the station established last year. Solving the problem in a short time, Biçer said he had finished maintenance work on it and updated it, and it was up and running. Stating that they had set up a new communication system called iridium, Biçer said: “We are making sure that meteorological parameters such as temperature, humidity, wind speed, direction, pressure, sunlight hours are recorded. We are also measuring the intensity of radiation and daylight. We will also ensure that this data is shared with the world instantaneously.”

Raising the anchor for Dismal Island

We said goodbye to Horseshoe Island with a group photo of the entire expedition team. We returned to the ship at 8 p.m. After a while, we set sail toward Dismal Island. Meanwhile, professor Başar and I were in a meeting. Informing the expedition team of our plans, Başar said we would be reaching Dismal Island in the morning. Saying that we would be returning after receiving data from the Global Navigation Satellite System (GNSS) Station established by Turkey's General Directorate of Mapping (HGM), Başar said that our route was changed due to adverse weather. At the meeting with Juan Barra Recabarren, the experienced captain of the ship, we learned that the new route would save us four days. Although this news seemed like good news for us, it is actually bad news for the world as a whole. A passage that had been covered with ice for centuries inside the bay of Adelaide appeared to have melted, opening up for the first time. This passage, detected by satellite photos, is a concrete result of global warming.

A mosque on Antarctica?

We reached King George Island, located in the northernmost part of Antarctica, days later. We disembarked from the ship and went ashore. While waiting for the plane to take us to the airport – which was nothing like your typical airport, just a makeshift construction built on the ground and no asphalt for a runway – the structures built around it caught our attention. Besides all the scientific bases, there were also two churches on King George Island. The two churches built for both Catholics and the Orthodox were actually symbolic. Although they occupied small areas as structures, the mission they represented was much larger. Meanwhile, Turkey is still preparing to construct a permanent scientific base on Horseshoe Island. The construction of a mosque within this base would be of great importance for the Islamic world. The responsibility of building the first mosque in Antarctica should be on Turkey's shoulders, I say.

The rigid rules of icy lands

Besides its unique natural beauty and geographical structure, Antarctica also differs from other continents with its rules. It is strictly forbidden to take home any animals or plants from this continent. Those who wish to visit the continent have to disinfect their boots and other footwear before they step onto the ice as well as after. Neither a single stone nor a piece of ice or a penguin feather can be collected from the continent without permission. It is as strictly forbidden to leave anything on the continent as it is to take anything from it. Those who come to the continent have to take back everything they brought with them, including their feces when it's time to leave.

The right of way always belongs to the animals. Cutting them off or intercepting their movements are strictly forbidden. People are only allowed to come as close as five meters to penguins, so don't try to get any closer. You must also stand 15 meters away from fur seals and at least 25 meters from elephant seals. Of course, you may ask: Are there any officers or rule-enforcers on this continent? Who is this monitor? An international commission actually determines the rules on the special continent that is Antarctica. Everyone who visits the continent is a natural part of the control mechanism. Anyone can monitor anyone (to ensure they adhere to the rules).

Why is Antarctica the apple of the world's eye?

Antarctica is the world's most virgin, pristine continent. It is possible to access data on life on the continent millions of years ago. This gives us the opportunity to see the extent of damage we have caused to our world as humans and perhaps, find ways to correct it to some extent. That's why scientists have fixated their attention on the continent. When an app on our electronic device starts not working or we think that its settings are seriously messed up, we just reboot the device back to its factory settings as the easiest and most practical solution. The Earth's factory settings are on this very continent. Antarctica definitely offers something for anyone who knows what to look for. This continent also contains many genetic secrets. Drugs that can be used in the treatment of various diseases, from cancer to antibiotic-resistant infections, are already being produced by using chemicals that form under unusual conditions in Antarctica.

Rules on the continent, which is not under the sovereignty of any nation, are determined by the Antarctic Treaty System. As part of this treaty and related agreements, there are 29 consultant countries and 24 observer countries. Turkey is still among the countries with observer status. As the only piece of land dedicated to the common good of mankind, Antarctica has no indigenous people, is not governed by any country and hence is called "the continent of science and peace." The continent is home to penguins, seals, whales, birds and various animals.