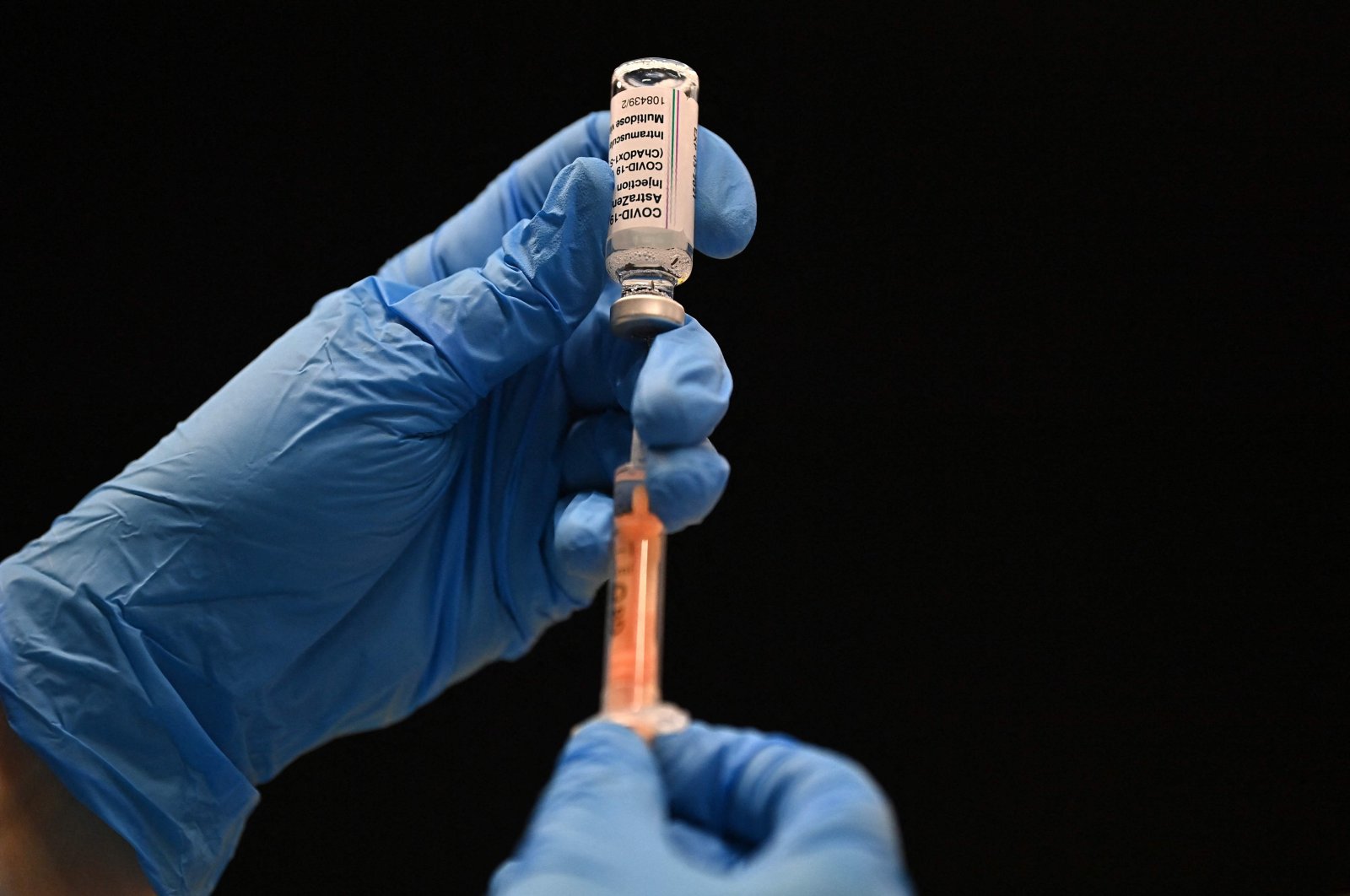 A health care professional draws up a dose of Oxford/AstraZeneca's COVID-19 vaccine at the vaccination center set up inside Brighton Center in Brighton, southern U.K., Jan. 26, 2021. (AFP Photo)
by Reuters Aug 22, 2021 9:31 pm
RECOMMENDED

AstraZeneca announced Friday positive results from trial data of a treatment for COVID-19 symptoms, raising hopes of solutions beyond vaccines particularly for those who respond poorly to immunization shots.

The British drugmaker said its new antibody therapy reduced the risk of people developing any COVID-19 symptoms by 77% in a late-stage trial.

While vaccines rely on an intact immune system to develop an arsenal of targeted antibodies and infection-fighting cells, AstraZeneca's AZD7442 therapy consists of lab-made antibodies that are designed to linger in the body for months to stifle the coronavirus in case of an infection.

The company said that 75% of the participants in the trial for the therapy – which comprises two types of antibodies discovered by Vanderbilt University Medical Center in the United States – had chronic conditions including some with a lower immune response to vaccinations.

Similar therapies made with a drug class called monoclonal antibodies are being developed by Regeneron, Eli Lilly and GlaxoSmithKline with partner Vir, competing for a role in COVID-19 treatment and prevention.

But AstraZeneca is the first to publish positive prevention trial data in the field and is now targeting conditional approval in major markets well before the end of the year, aiming to produce roughly 1 to 2 million doses by then.

Penny Ward, visiting professor in pharmaceutical medicine at Kings College in London, said the news bode well for people who have responded poorly to vaccination or who must take immune-suppressants for post-transplant, autoimmune disease and other conditions.

"It could potentially be game changing for these individuals, who are currently being advised to continue to shield despite being fully vaccinated," she said.

The good news on the therapy was tempered, however, by a separate AstraZeneca statement Friday.

It said a trial of a treatment for the rare neurological disorder amyotrophic lateral sclerosis (ALS), developed by AstraZeneca's newly acquired Alexion, had been stopped early due to a lack of efficacy.

AstraZeneca executive Mene Pangalos said the therapy trial results were taken three months after the antibodies were injected and investigators would follow up as far out as 15 months in the hope the company can tout the shot as a yearlong shield.

"We’re really trying to help patients that need an added level of protection on top of a vaccine," said Pangalos.

He signaled that the prospects of a new COVID-19 product in AstraZeneca's medicine cabinet could also enhance the strategic value of its existing vaccine Vaxzevria, which it developed in collaboration with Britain's Oxford University.

"No other company has delivered two molecules against SARS-CoV2. This definitely helps us in positioning us in terms of COVID," Pangalos told Reuters. SARS-CoV2 is the scientific term for the coronavirus that causes COVID-19.

Another leading AstraZeneca executive, Ruud Dobber, had said last month that different strategic options were being explored for AstraZeneca's vaccine operations, which have faced a string of challenges.

The Anglo-Swedish drugmaker has suffered production problems during the rollout of Vaxzevria while very rare cases of blood clotting have weighed heavily on demand for the shot in Europe. The vaccine has also yet to win clearance in the United States.

Concerns over the new delta variant of COVID-19 and waning vaccine efficacy have prompted several high-income countries to offer a third vaccine shot on top of the usual two-shot regimen to the immunocompromised and other groups at risk.

The immunocompromised, such as those with organ transplants or in cancer care, make up about 2% of the population and would be the main target group for the new therapy. Naval forces on missions could also benefit, among others, Pangalos said.

Even though only 12% to 13% of the trial volunteers were vaccinated when the therapy trial data was generated, AstraZeneca will seek to position the shot as a top-up to previous inoculations.