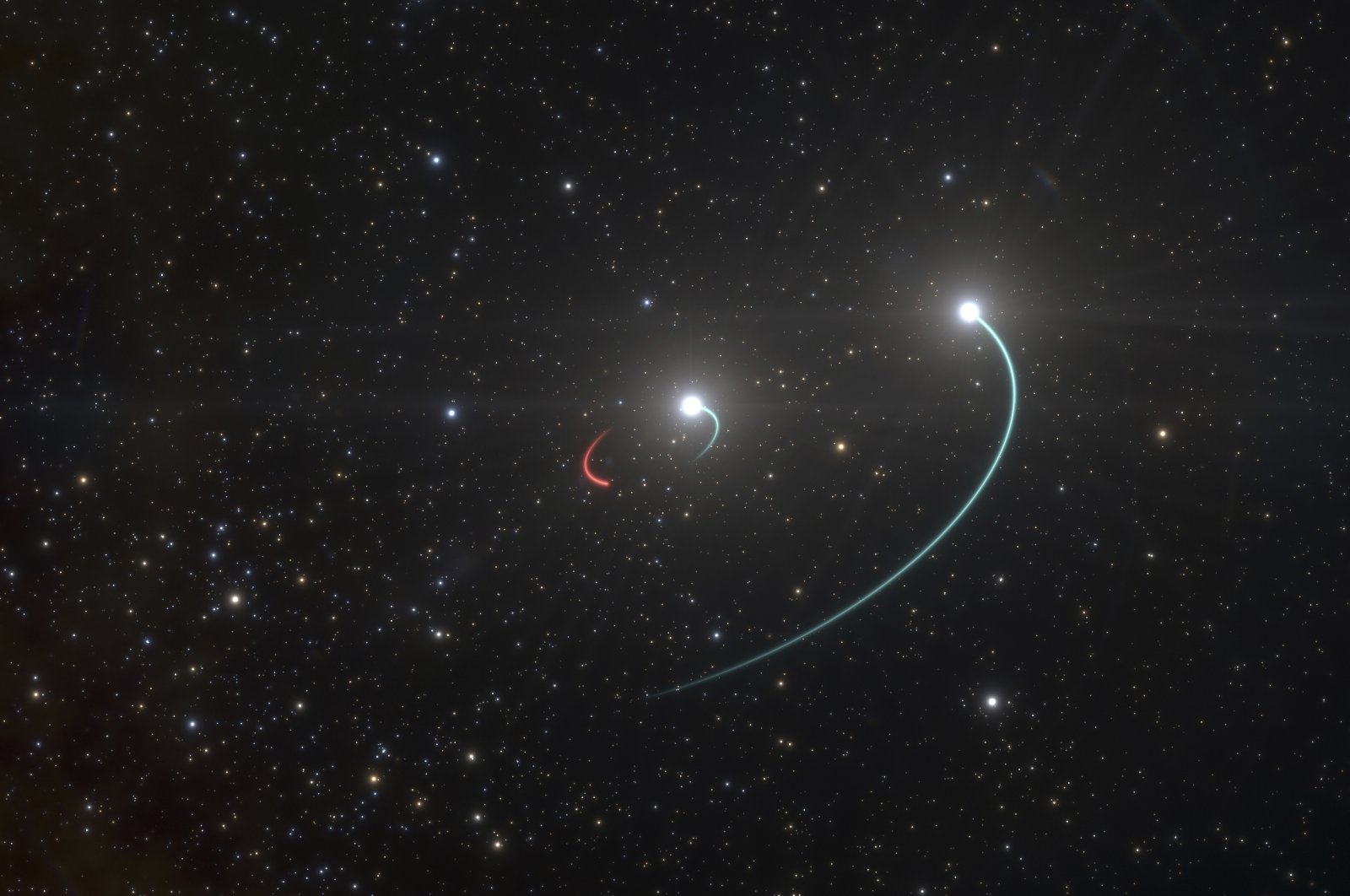 This illustration provided by the European Southern Observatory shows the orbits of the objects in the HR 6819 triple system, May 2020. (AP Photo)
by REUTERS May 07, 2020 11:00 am
RECOMMENDED

Astronomers have spotted the closest black hole to Earth ever discovered and are surprised about its living arrangements – residing harmoniously with two stars in a remarkable celestial marriage that may end in a nasty breakup.

The black hole, at least 4.2 times the mass of the sun, is gravitationally bound to two stars in a so-called triple system roughly 1,000 light-years from Earth, researchers said Wednesday.

A light-year is the distance light travels in a year, 5.9 trillion miles (9.5 trillion km).

Black holes are extraordinarily dense objects possessing gravitational pulls so powerful that not even light can escape. Some are monstrous like the one at our galaxy's center 26,000 light-years from Earth that is 4 million times the sun's mass.

Garden variety so-called stellar-mass black holes like the newly discovered one have the mass of a single star. This one probably began its life as a star up to 20 times the sun's mass that collapsed into a black hole at the end of its relatively short lifespan.

This triple system, called HR 6819, can be seen from Earth's southern hemisphere with the naked eye, in the constellation Telescopium. Until now, the closest-known black hole was one perhaps three times further away.

Only a few dozen stellar-mass black holes previously were known. But there may be hundreds of millions or even a billion of them in the Milky Way, said astrophysicist and study co-author Petr Hadrava of the Academy of Sciences of the Czech Republic.

This black hole, detected using an observatory in Chile, is minding its manners and has not shredded its two partners: stars about five or six times the mass of the sun. At least not yet.

"The formation of a black hole is a violent process, and most models would not have predicted a triple system could survive that but rather would fly apart," Rivinius said.

The black hole forms a pair with one of the two stars, as near to one another as the Earth is to the sun. The other star is much further away, orbiting the pair. This star spins so rapidly that it is misshapen, bulging at the equator.

The two stars are sufficiently distant from the black hole that it is not pulling material from them. But in a few million years the closer star is expected to grow in size as part of its life cycle.

"What happens then is uncertain," Rivinius said. "The most spectacular outcome would be if the black hole ends up with that star inside it."