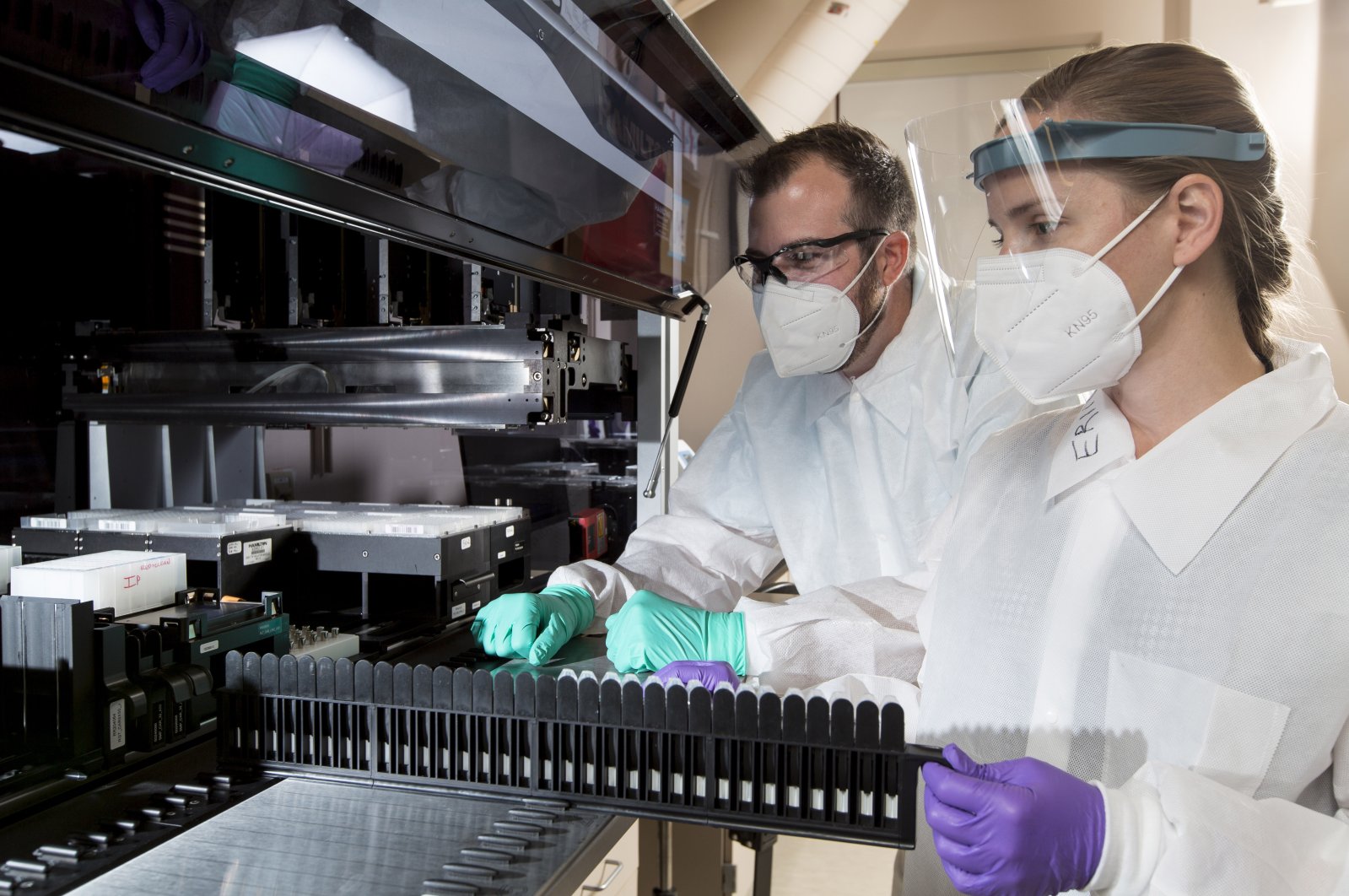 A senior proteomics scientist and a research associate work in a lab that analyzes blood samples at the company's facility in the Center for Emerging Technologies in St. Louis, July 22, 2020. (C2N Diagnostics via AP)
by Agencies Dec 01, 2020 10:55 am
RECOMMENDED

Scientists said Monday they had developed a way of predicting if patients will develop Alzheimer's disease by analyzing their blood, in what experts hailed as a potential "game-changer" in the fight against the debilitating condition.

Around 50 million people live with Alzheimer's, a degenerative brain disease that accounts for more than half of global dementia cases. While its precise mechanism is not fully understood, Alzheimer's appears to result from the accumulation of proteins in the brain that is thought to lead to the death of neurons. Some of these proteins are traceable in the blood of patients and tests based on their concentrations can be used to diagnose the disease.

Scientists in Sweden and Britain now believe blood tests can be used to predict Alzheimer's years before the onset of symptoms.

Writing in the journal Nature Aging, they described how they developed and validated models of individual risk based on the levels of two key proteins in blood samples taken from more than 550 patients with minor cognitive impairments.

The model based on these two proteins had an 88% success rate in predicting the onset of Alzheimer's in the same patients over the course of four years.

They said that while further research was needed, their prediction method could have a significant impact on Alzheimer's cases, given that "plasma biomarkers" from blood tests are "promising due to their high accessibility and low cost."

Richard Oakley, head of research at the Alzheimer's Society, said the main struggle in battling the disease was diagnosing cases early enough to intervene with experimental treatments.

"If these blood biomarkers can predict Alzheimer's in larger, more diverse groups, we could see a revolution in how we test new dementia drugs," he said.

Musaid Husain, professor of neurology at the University of Oxford, described Monday's research as a "potential game-changer."

"For the first time, we have a blood test that can predict well the risk of subsequent development of Alzheimer's disease in people who have mild cognitive symptoms," said Husain, who was not involved in the study.

"We need further validation (of the results), but in the context of other recent findings, this could be a transformative step to earlier diagnosis, as well as testing new treatments at earlier stages of the disease."

Meanwhile, the blood tests have also gone on sale, though reactions have been mixed.

Independent experts are leery because key test results have not been published and the test has not been approved by the U.S. Food and Drug Administration (FDA) – it's being sold under more general rules for commercial labs. But they agree that a simple test that can be done in a doctor’s office has long been needed.

To be diagnosed with Alzheimer's, people must have symptoms such as memory loss plus evidence of a buildup of a protein called beta-amyloid in the brain.

The best way now to measure the protein is a costly PET brain scan that usually is also not covered by insurance. That means most people don’t get one and are left wondering if their problems are due to normal aging, Alzheimer’s or something else.

The blood test from C2N Diagnostics of St. Louis aims to fill that gap. The company's founders include Drs. David Holtzman and Randall Bateman of Washington University School of Medicine, who headed research that led to the test and are included on a patent that the St. Louis university licensed to C2N.

The test is not intended for general screening or for people without symptoms – it’s aimed at people 60 and older who are having thinking problems and are being evaluated for Alzheimer’s. It’s not covered by insurance; the company charges $1,250 and offers discounts based on income. Only doctors can order the test, and the results come within 10 days. It's sold in all but a few states in the U.S. and just was cleared for sale in Europe.

It measures two types of amyloid particles plus various forms of a protein that reveal whether someone has a gene that raises the risk for the disease. These factors are combined in a formula that includes age, and patients are given a score suggesting low, medium or high likelihood of having amyloid buildup in the brain.

If the test puts them in the low category, “it’s a strong reason to look for other things” besides Alzheimer’s, Bateman said.

“There are a thousand things that can cause someone to be cognitively impaired,” from vitamin deficiencies to medications, Holtzman said.

“I don’t think this is any different than the testing we do now” except it’s from a blood test rather than a brain scan, he said. “And those are not 100% accurate either.”