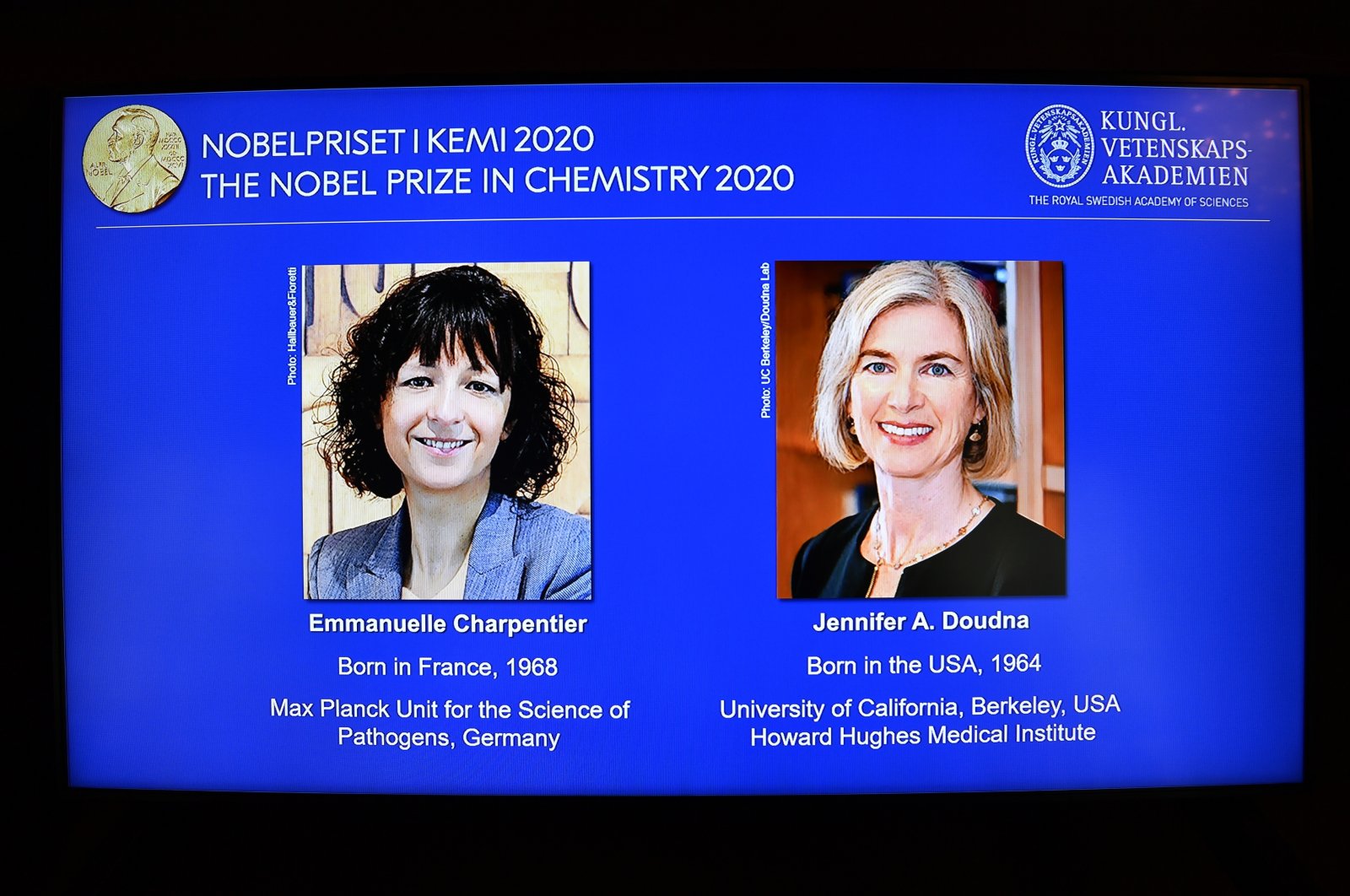 Photos of the winners of the 2020 Nobel Prize in Chemistry are displayed on a screen during a news conference at the Royal Swedish Academy of Sciences, in Stockholm, Sweden, Oct. 7, 2020. (EPA Photo)
by Agencies Oct 07, 2020 1:40 pm
RECOMMENDED

Emmanuelle Charpentier of France and Jennifer Doudna of the United States on Wednesday won the Nobel Prize in Chemistry for developing the gene-editing technique known as the CRISPR-Cas9 DNA snipping "scissors".

"Using these, researchers can change the DNA of animals, plants and microorganisms with extremely high precision," the Nobel jury said.

"This technology has had a revolutionary impact on the life sciences, is contributing to new cancer therapies and may make the dream of curing inherited diseases come true."

Charpentier, 51, and Doudna, 56, are just the sixth and seventh women to receive the Nobel Prize in Chemistry.

While researching a common harmful bacteria, Charpentier discovered a previously unknown molecule – part of the bacteria's ancient immune system that disarms viruses by snipping off parts of their DNA. After publishing her research in 2011, Charpentier worked with Doudna to recreate the bacteria's genetic scissors, simplifying the tool so it was easier to use and apply to other genetic material. They then reprogrammed the scissors to cut any DNA molecule at a predetermined site – paving the way for scientists to rewrite the code of life where the DNA is snipped.

The CRISPR/Cas9 tool has already contributed to significant gains in crop resilience, altering their genetic code to better withstand drought and pests. The technology has also led to innovative cancer treatments, and many experts hope it could one day make inherited diseases curable through gene manipulation.

The first time a woman was honored with the chemistry prize was in 1911 when Marie Curie, who also took the physics prize in 1903, won for discovering the elements radium and polonium.

The pair will share 10 million Swedish kronor (about $1.1 million). They would normally receive their Nobel from King Carl XVI Gustaf at a formal ceremony in Stockholm on Dec. 10, the anniversary of the 1896 death of scientist Alfred Nobel who created the prizes in his last will and testament.

But the in-person ceremony has been canceled this year due to the coronavirus pandemic and replaced with a televised ceremony showing the laureates receiving their awards in their home countries.

The 2020 award week opened on Monday with the Nobel Prize in Medicine to Americans Harvey J Alter and Charles M Rice and Briton Michael Houghton for the discovery of the hepatitis C virus.

On Tuesday, Roger Penrose of Britain, German-born Reinhard Genzel and American Andrea Ghez were awarded the Nobel Prize in Physics for research on black holes.

The literature prize and the peace prize will be announced later this week, with the economics award due next week.