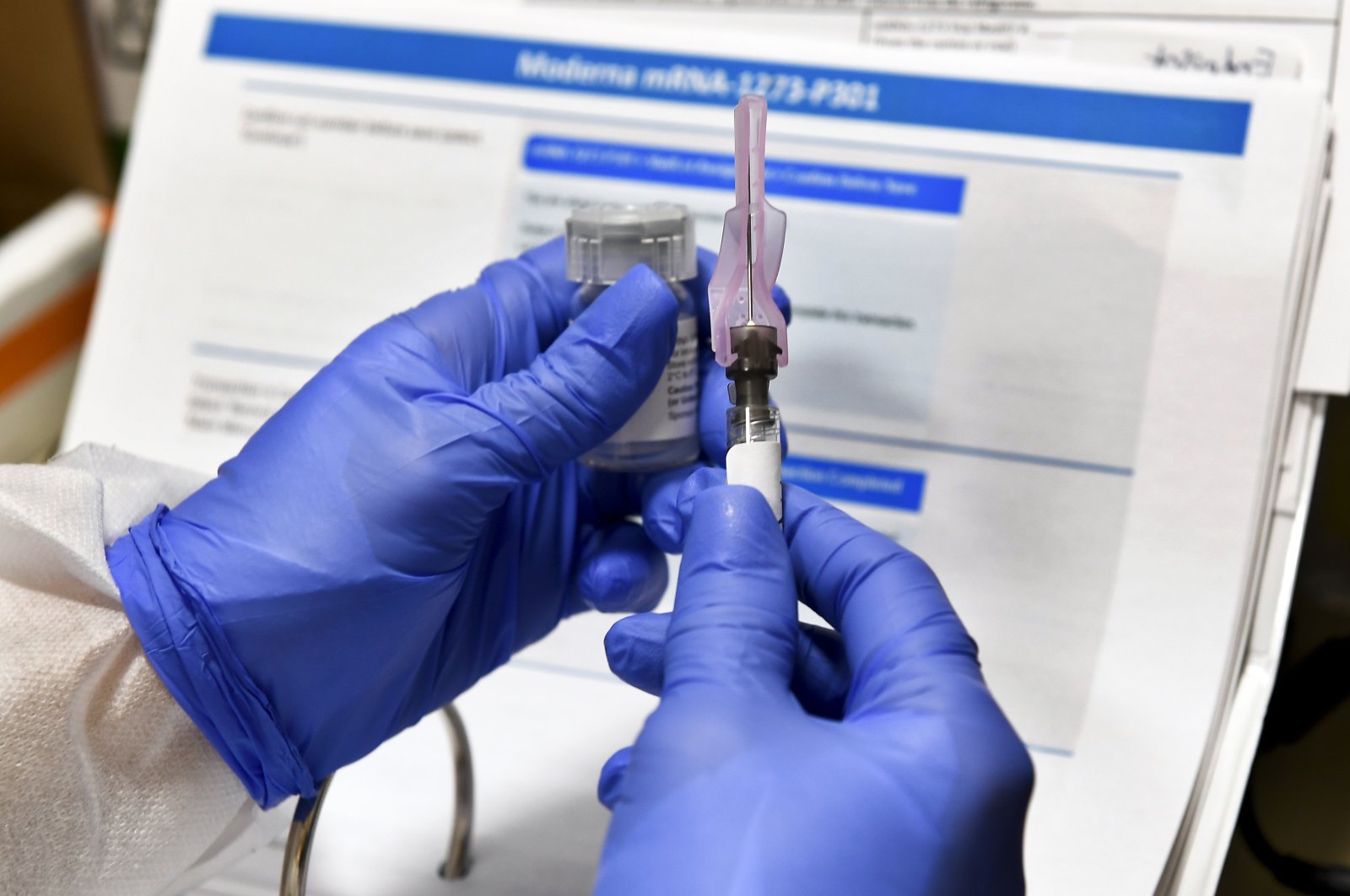 In this file photo, nurse Kathe Olmstead prepares a shot that is part of a possible COVID-19 vaccine, developed by the National Institutes of Health and Moderna Inc., in Binghamton, New York, U.S., July 27, 2020. (AP Photo)
by REUTERS Nov 16, 2020 3:02 pm
RECOMMENDED

Moderna Inc. said on Monday its experimental vaccine was 94.5% effective in preventing COVID-19 based on interim data from a late-stage clinical trial, becoming the second U.S. company in a week to report results that far exceed expectations.

Together with Pfizer Inc. and BioNTech's vaccine, also shown to be more than 90% effective, and pending more safety data and regulatory review, the United States could have two vaccines authorized for emergency use in December with as many as 60 million doses of vaccine available by the year's end.

The vaccines, both built using new technology known as messenger RNA or mRNA, represent powerful new tools to fight a pandemic that has infected 54 million people worldwide and killed 1.3 million. The news also comes at a time when COVID-19 cases are soaring, hitting new records in the United States and pushing some European countries back into lockdowns.

"We are going to have a vaccine that can stop COVID-19," Moderna President Stephen Hoge said in a telephone interview.

Moderna's interim analysis was based on 95 infections among trial participants who received either a placebo or the vaccine. Of those, only five infections occurred in those who received the vaccine, which is administered in two shots 28 days apart.

A key advantage of Moderna's vaccine is that it does not need ultra-cold storage like Pfizer's, making it easier to distribute. Moderna expects it to be stable at standard refrigerator temperatures of 2 to 8 degrees Celsius (36 to 48 Fahrenheit) for 30 days and can be stored for up to six months at minus 20 degrees Celsius.

Pfizer’s vaccine must be shipped and stored at minus 70 degrees Celsius, the sort of temperature typical of an Antarctic winter. At standard refrigerator temperatures, it can be stored for up to five days.

The data from Moderna's 30,000 participant-strong trial also showed the vaccine prevented cases of severe COVID-19, a question that still remains with the Pfizer vaccine. Of the 95 cases in Moderna's trial, 11 were severe and all 11 occurred among volunteers who got the placebo.

Moderna, part of the U.S. government's Operation Warp Speed program, expects to produce around 20 million doses of the vaccine for the United States this year, millions of which the company has already made, and is ready to ship if it receives FDA authorization.

"Assuming we get an emergency use authorization, we'll be ready to ship through Warp Speed almost in hours," Hoge said. "So it could start being distributed instantly."

VIDEO — US biotech firm Moderna says its experimental vaccine was 94.5% effective in preventing COVID-19 based on interim data from a late-stage clinical trialhttps://t.co/PPVKRIUgNA pic.twitter.com/zPM1Ak5Kz2

The 95 cases of COVID-19 included several key groups who are at increased risk for severe disease, including 15 cases in adults aged 65 and older and 20 in participants from racially diverse groups.

Most side effects were mild to moderate. A significant proportion of volunteers, however, experienced more severe aches and pains after taking the second dose, including about 10% who had fatigue severe enough to interfere with daily activities while another 9% had severe body aches. Most of these complaints were generally short-lived, the company said.

Moderna's data provide further validation of the promising but previously unproven mRNA platform, which turns the human body into a vaccine factory by coaxing cells to make certain virus proteins that the immune system sees as a threat and mounts a response against.

The United States has the world's highest known number of COVID-19 cases and deaths with more than 11 million infections and nearly 250,000 deaths.

The company hopes to have between 500 million and 1 billion doses in 2021, split between its U.S. and international manufacturing sites and dependent in part on demand.

The U.S. government has said COVID-19 vaccines will be provided free to Americans, whether they have health insurance, are uninsured or are covered by government health programs such as Medicare.

Moderna also said it will use its data to seek authorization in Europe and other regions.

Other countries such as China and Russia have already begun vaccinations. Russia licensed its "Sputnik-V” COVID-19 vaccine for domestic use in August before it released data from large-scale trials. It said on Nov. 11 that its vaccine was 92% effective based on 20 infections in its large trial.